BMW has played a blinder with its stunning M140i and it's still just as tempting in the upgraded form we look at here. Power has risen slightly to 340bhp from the improved six-cylinder 3.0-litre turbo engine. Performance though, is largely unchanged, keeping this as a hot hatch of the top order, its acceleration seeing you to 62mph from rest in 4.8 seconds. Comprehensively fettled suspension, steering and brakes give it real depth of talent.

Certain car manufacturers make rods for their own backs. Jaguar will never be able to build a car that's regarded with the same reverence as the E Type. Likewise Audi will never eclipse the Quattro. And BMW? Well in BMW's back story, there's this thing called the E30 M3. It's the spectre that gets raised every time the Munich company builds a smallish performance car. And they're never quite as good. But times change and we have to accept that due to all manner of legislation and indeed customer expectations, cars just aren't going to look or feel like that iconic M3 of the Eighties. But let's think about that car for a minute. When it first appeared, it had 192bhp, got to 62mph in 6.9 seconds and ran out of puff at 146mph. Yes it was a tactile and effervescent thing with a great chassis but these days it would be dusted off by a middle rank hot hatch. If you want to cut it these days as a premier league performance car, you need more. The BMW M140i is a case in point.

As Toyota has demonstrated with its GT86, the modest power, back to basics option is one that has met with critical acclaim. There is, however, a good deal of fun in sending so much power to your rear wheels. The amount in question has slightly risen in this revised model from 322 to 340bhp. The improved 3.0-litre turbocharged six-cylinder engine is still one heck of a motor and offers near supercar acceleration figures. In fact, it'll rocket to 62mph in just 4.8 seconds in the manual version (4.6s in the auto model) and keep going to an electronically limited 155mph. Those are the same stats as you'd get with BMW's identically-engined M240i Coupe model - but this car looks so much more discreet. Of course we could discuss for ages whether a car that makes going fast this easy is a more satisfying choice than a vehicle that's slower but which makes you work for the performance, but let's just say that different people like different things from their hot hatches and coupes. Besides, this BMW can be surprisingly flexible. Press the Sport button and you immediately notice the steering weight up and the throttle response sharpen. Press the button once more and you'll find Sport+, which partially disengages the stability control and offers an even spikier throttle pedal. Suddenly the M140i will feel as if it has teeth.

As before, there's a choice of either three or five-door bodystyles. Looks-wise, things are much as before, which means a remarkably subtle appearance for any kind of M-car. If you saw the BMW M badge and expected pumped-up wheel arches and a front air intake that looks as if it would ingest children, think again. This is a different take on the BMW Motorsport theme. Rather than being positioned as a fully-fledged M model, think of the M140i as a halfway house. It's got plenty of M-specific go but not all the dressing that comes with it. It gets a set of side skirts with subtle creases and modest air vents in the front spoiler. Ferric grey mirrors and chromed exhaust pipes complete the look. Mind you, don't think that just because it's an M140i and not an M1 that it's in any way half-baked. The steering and suspension have been thoroughly fettled, with a different rack and unique front geometry, while the springs and dampers have all been beefed up. Plus there are meatier brakes and model-specific alloy wheels and tyres, differently sized front to rear. It's a root and branch job. Inside it's not actually all that different from humbler 1 Series models. Which means that there have been a few upgrades of late, bringing things like chrome and gloss black detailing around the centre console. Like the rest of the improved second generation I series range, this top variant enjoys improved build quality, with more substantial plastics used throughout. BMW's much-improved iDrive system features and features a high definition 6.5 inch flat screen. The shark-nosed exterior styling takes a bit of getting used to, but most would agree that the profile looks clean, while the rear end is muscular with tidy detailing.

You might feel that around £32,000 is quite a bit to shell out on a hot hatch, but we reckon this BMW is still one of the biggest performance bargains in recent times. It's got the poise and performance to make mincemeat of an Audi RS3 on a circuit and it's almost as quick in a straight line as the latest Porsche 911. A Porsche Cayman suddenly looks quite an indulgence when this sort of capability is available at this price. It's not as if this car is all engine and no finish either. You get a Nevada leather interior, with sports seats up font and three seat belts in the back, Bluetooth, both AUX-in and USB as well as a stereo that can play MP3s from CD, a multifunction steering wheel with a speed limiter mode, air conditioning, door sill finishers with 'M140i' designation, a short-shift gear lever and a whole host of safety kit, including DSC+ stability control, xenon headlights, a tyre pressure warning system and dynamic brake lights. An eight-speed automatic gearbox is also offered as an option. Technology upgrades have brought adaptive LED headlights and cruise control to the options list, plus a GPS-guided eight-speed automatic gearbox. BMW Connect is standard and comes with emergency assist. There's also the option of adding apps for live traffic reports, music streaming and a concierge service.

You're probably aware that BMW can perform some sort of magic trick when it comes to the economy and emissions of its performance cars. The M140i is no exception. Time was when you'd have needed extremely deep pockets to run a petrol-engined car with 340bhp and while this is clearly no Prius, it will return an improved combined economy figure of 36.2mpg. Decidedly un-terrifying. The same story applies to emissions. You'll see 179g/km if you choose the manual car and a mere 163g/km if you plump for the automatic. It wasn't so long ago that these were the sort of numbers you'd be delighted with from a bog-standard 2.0-litre hatchback. EfficientDynamics, BMW's suite of energy-saving features, continues with an Auto Start-Stop function available on both manual and automatic transmissions. An ECO PRO mode, activated using the Drive Performance Control, is a new feature on BMW's that adjusts various on-board systems to maximise efficiency. When in ECO PRO mode, the throttle response is adjusted to encourage a more economical driving style. The extra economy created in ECO PRO mode is fed back to the driver, with the in-car displays showing the additional number of miles achieved.

Make no mistake, this is a mightily impressive car. You'll need to look past the unprepossessing styling and concentrate on the BMW M140i's sheer capability. It can turn its hand to almost anything. It's crushingly fast, offers the keen driver real options at the wheel, yet can trundle up a motorway while showing better than 45mpg on the computer. It'll run four kids to school in perfect safety and has a boot big enough for a week's shopping on the way back. Yes, you can easily buy a more extrovert performance machine for this sort of money but the M140i is the sort of car you'll feel extremely smug about driving just because it's so much smarter than anything for remotely comparable money. I never thought I'd get so enthusiastic about a BMW 1 Series, but this is a very special vehicle. You owe it to yourself to have a try. 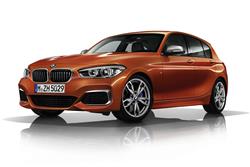