BMW's improved 2 Series Active Tourer five-seat compact MPV continues to feature the option of the Munich brand's latest Plug-in technology. It makes quite a difference too. The 225xe version of this car uses a BMW eDrive electric motor and a 1.5-litre three-cylinder BMW TwinPower Turbo engine to offer both an electric driving experience and unrestricted mobility. The resulting combined fuel consumption of up to 166mpg and CO2 emissions figure of 38g/km set a strong standard in the class.

If you like the idea of plugging in your family-sized BMW but you don't want something as unusual-looking as the company's i3 model, then your dealer will point you towards this car, the 225xe version of the brand's 2 Series Active Tourer five-seat compact MPV. You might be tempted to see this as an i3 in a more conservative set of clothes, but in reality, this 225xe is a rather different product. Whereas the i3 is a full electric car that can be optional ordered with a tiny range-extender engine, the 225xe is a proper Plug-in hybrid. This means that instead of the i3 Range Extender model's noisy bike engine, you get a proper 1.5-litre three cylinder TwinPower Turbo unit borrowed from a MINI that'll cut in once your 32 mile all-electric driving range is used up.

If you don't get around to telling your passengers that this 2 Series Active Tourer features cutting-edge Plug-in hybrid power, they probably won't guess. There's almost nothing about this car, either to look at or to drive, that proclaims eco-consciousness and green-friendly smugness - which is probably what potential buyers will like most about it. You might like to tell your business colleagues around the water cooler that the 1.5-litre TwinPower petrol turbo engine it uses is the same as that in BMW's i8 supercar: then again, you probably won't bother. That would draw attention - which is precisely what a typical 225xe owner wouldn't want. If you do put your foot down and use that MINI Cooper engine to its maximum, then things go pretty rapidly: 62mph is 6.7s away en route to 126mph. Better though to settle back and try and maximise the claimed 32 mile all-electric driving range. We say 'claimed' because it's unlikely you'll replicate that unless you drive like a nun. Around 15-20 miles is more achievable. Like all 2 Series Active Tourer models, this one drives through its front wheels in a very un-BMW-like fashion.

BMW has tried to liven up the look of this revised version a little with a larger front kidney grille, redesigned front fog lamps, smarter wheel designs and twin tail pipes. Otherwise, things are much as before. Intentionally, the brand has kept the visual changes that differentiate this 225xe variant from its conventionally-engined range stablemates to an absolute minimum. Which will leave potential buyers needing to like the standard 2 Series Active Tourer model's quite conservative design. The short overhangs and long wheelbase, the wedgy profile, the L-shaped rear lights, the crisp contours and the smart swage lines all point to this Munich maker. It also seems sportier than you might expect a car of this kind to be, courtesy of things like the steeply raked windscreen and the way that the distinctive double kidney grille is positioned lower than the headlights. Inside, there are sliding and reclining rear seats that allow you to prioritise space for passengers or luggage. Maximum boot space is a respectable 400-litres. The rear bench is a versatile thing that can split 40:20:40 and when fully folded there's access to up to 1,350-litres. The front passenger seat also folds to accommodate items up to 2.4m long. Up-front, as usual in the brand's modern models, the iDrive infotainment set-up's freestanding multifunction colour screen takes pride of place in the middle of the fascia, though the display is not of the current trendy touchscreen variety, controlled instead by a circular rotary dial down by the gearstick.

Prices sit in the £36,000-£38,000 bracket (about the same as you'd pay for the 220d xDrive diesel variant) and there's a choice of three trim levels, 'Sport', 'Luxury' and 'M Sport'. It'll also help that this model, like all 2 Series Active Tourer variants, comes well equipped. You get smart alloy wheels, LED daytime driving lights, front foglights, an automatic tailgate, Park Distance Control rear parking sensors, heated power mirrors and heated washer jets, an alarm, a chrome-finished exhaust pipe, plus auto headlamps and wipers. Inside, the sliding rear bench and the 40:20:40 split-folding rear backrest is standard-fit, plus there are niceties like two-zone automatic air conditioning, 'Comfort Go' keyless engine starting. Other standard items include a 'Sport' multifunction leather-trimmed steering wheel with a speed limiter function to preserve your licence through roadworks or in urban areas. Plus there's Bluetooth with a USB interface and audio streaming functionality, a DAB digital radio and a decent quality 'BMW Professional' radio set-up with six speakers, a CD player and a 6.5-inch colour monitor.

Like all Plug-in hybrid models, this 225xe quite legally distorts the official WLTP Driving Cycle tests that produce the fuel and CO2 figures the industry depends upon. This is managed through the simple expedient of beginning the test fully charged, which means that this car will go for up to 32 WLTP-rated miles before it uses any fuel at all. Hence the official figures it generates - up to 166.2mpg on the WLTP combined cycle and up to 38g/km of CO2 (WLTP). Will you as an owner get anywhere near this kind of return in real life? No. Will the car prove more affordable to run than the comparable 218d and 220d diesel versions? Quite possibly. It really all depends on the kind of driving you do. High mileage owners and those without access to a garage will dismiss the prospect of 225xe ownership out of hand but if you don't have these constraints and don't cover more than 20 miles a day as part of your commute, then this car could make a lot of sense. Buy the optional BMW I Wallbox - as all owners inevitably will - and the car can be recharged in 2hours 20 minutes. Plus it generates a BIK tax liability of just 7%. Makes a lot of sense.

Did you ever expect to see a BMW MPV built around front wheel drive, a three cylinder engine and electric power? I'm not sure I ever did. Still, in this 225xe, we've got exactly that and it's a package that actually makes a lot of sense for the right practicality-orientated family buyer - someone with a business-minded eye on their taxation status who still enjoys their driving. This probably isn't the BMW you dreamed of owning in your school or college days. But it could well be the one you actually need. 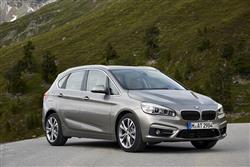