The BMW 3 Series is at its most competitive in 320d guise. Jonathan Crouch takes a drive.

The BMW 3 Series is still the definitive mid-sized sports saloon and it sells most strongly in this 320d four cylinder diesel form. The powerplant on offer here now gets sequential twin turbocharging, plus the suspension has been much improved with the addition of clever 'lift-related' dampers. In short, this car's taken a useful step forward.

Think of a really sharp handling relatively compact sports saloon and it's probable that you're thinking of this car, BMW's 3 Series. Over more than four decades, it's dominated the segment it first invented and upwards of 15 million of them have been sold. So of course the company's hopes are high for this seventh generation version. The Munich maker certainly needs this contender to be good. The Bavarian marque used to advertise every car it made as being 'the ultimate driving machine', but that hasn't been a slogan appropriate to many of the SUV-inspired or electrified models the company's brought us in more recent times. And it's also been a difficult mantra to meet as the 3 Series has become larger and heavier over the last few years. It was time for a re-set. The question is whether this 'G20'-series design is good enough to provide it. I tried a 320d variant to find out.

Much is familiar here; a front engine, rear wheel drive formula with near perfect 50:50 weight distribution has defined the 3 Series to date and this seventh generation model doesn't deviate too far from that script, But also much is different. The company's xDrive 4WD system is more widely available across the line-up including on the 190hp 320d variant we're trying here. And BMW's engineers were given permission to add more of a sporting edge to this 'G20' design, being aided in that quest by this MK7 model line's adoption of the aluminium-rich 'cluster architecture' platform these days used by the brand's larger models. This has provided a platform that's 25% stiffer and it's been a major contributor to weight savings over the previous 'F30'-series model of up to 55kgs. From this optimum starting point, the development team then added in a whole range of handling updates, with the most significant addition being the special so-called 'lift-related' dampers. These clever shock absorbers incorporate structures that provide extra damping at the extremes of wheel travel and are standard on all models, allowing quite a firm sporting set-up to be adopted, but also one able to deliver a fluent ride over tarmac imperfections. Thanks to that, this car's able to combine a set-up for Silverstone with something that works equally well on the North Circular. Upgraded four-cylinder 2.0-litre engines from BMW's Efficient Dynamics family are used across the powerplant range. The diesel line-up kicks off with the 150hp 318d, but most buyers prefer the 190hp 320d derivative I sampled, which slots into the range just below the 265hp six cylinder 330d. A new generation six-speed manual gearbox is available - though only on the 318d and 320d diesel variants. Most buyers of these models though will want to pay extra for the 8-speed auto gearbox that's mandatory with all the other engines.

So what have we here? A 3 Series certainly, but one that's clearly evolved, both in style and size. This 'G20'-series seventh generation design is 85mm longer and 16mm wider than its predecessor and features a nose section dominated by a larger and much more imposing take on this car's familiar broad-framed kidney grille. As usual, there's a choice of saloon or Touring estate body styles. Take a seat up front and, for the first time in a 3 Series you're guaranteed the feel of a proper luxury car, even in the lower echelons of the range, surrounded as you are by widescreen, chrome-garnished expensively elegant cabin architecture. The media features will obviously be quite a talking point. The 'M Sport'-trimmed model gets the full 'Live Cockpit Professional' package which gives you a 12.3-inch virtual instrument binnacle screen and a 10.25-inch centre-dash iDrive monitor. There's some clever stuff incorporated into this pricier set-up, including gesture control and what BMW calls an 'Intelligent Personal Assistant', which works a bit like the 'Siri' or 'Google Assistant' systems you might use on your 'phone and is there to answer questions you can voice to the car as you drive it. Even the lesser 'Live Cockpit Plus' media package gives you quite a lot, including 'Apple CarPlay' smartphone-mirroring, though you only get that for a year before you have to pay for it. Many of the various 'ConnectedDrive' digital services are also life-limited before becoming chargeable. Finding the ideal driving position is easy, the redesigned seats are very comfortable and standard features like a rear view camera and a 'Park Assist' auto parking system make town driving easier too.

For this 190hp 320d diesel, pricing starts in saloon form from just under £34,000. That's for a manual model; the optional Sport automatic transmission, which costs £1,690 more. Go for that and you'll be offered the opportunity to spend £1,500 more on xDrive 4WD. And the Touring estate body style costs around £1,500. Add in a few options and your asking price is going to easily start stretching up to around £40,000. There's a choice of 'SE', 'Sport' or 'M Sport' trim. These days, even base 'SE' trim gets you plenty of kit that previously you'd have had to pay extra for on a 3 Series - things like Adaptive full-LED headlamps, a Parking Assistant that automatically steers you into spaces, a reversing camera, acoustic side glass and 3-Zone air conditioning that allows rear passengers to set their own climate. BMW has even standardised its lovely 'Welcome Light Carpet' that illuminates the ground around the front doors when you get into the car or step out of it at night.

In rear-driven manual form, this 320d manages a combined reading of up to 56.5mpg and 115g/km of CO2. Or 55.4mpg and 110g/km as an auto. That equates to a Benefit-in-Kind rating of 31%. To give you some segment perspective, if you were to go for a directly comparable rival Audi A4 40 TDI or Mercedes C220d, you'd do fractionally better with your fuel return, but worse with your CO2 reading; the Audi manages 118g/km, while the Mercedes return is 121g/km. A small advantage certainly, but if it helps to justify the car you really want, it's worth having. Buyers of this 320d opting for the xDrive 4WD package we're trying here don't suffer too much of an efficiency downside either, the figures falling only to 52.3mpg and 119g/km. That's due to the revised xDrive set-up's use of lighter components and a clever electro-hydraulic multi-plate clutch that's cut torque losses by 30%. Whichever 320d variant you choose, a touring range of just over 800 miles should be possible. For completion, we'll also give you the figures for the six cylinder diesel variant, the 330d. This manages up to 47.9mpg and 133g/km in rear-driven form, or up to 45.6mpg and 136g/km in xDrive guise.

At last, we're back to the kind of car that BMW is best at making. We understand why the company has to make SUVs, People Carriers and Electric Vehicles, but it'll lose its soul if it ever stops making models like this one. The most recent previous generation 3 Series designs have dabbled with conformity, but this 'G20' version reasserts this Bavarian maker's dynamic dominance in the mid-sized sports saloon segment. No other rival serves up as deliciously rich a driving experience as this. There are a number of reasons why this seventh generation design has progressed once more in this regard - lighter weight, sequential turbocharging, a stiffer structure; all of it helps. But we reckon the 'lift-related' dampers are a crucial contributor, delivering a balance of ride and handling that no competitor can match. And segment-leading running cost efficiency adds the finishing touch to a classy package. Over the years, the 3 Series has changed a lot about the way we buy cars in this class, continually forcing its rivals to play catch up. This one's no different. 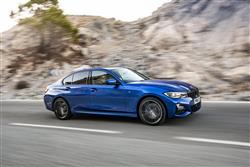 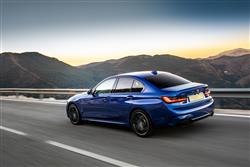 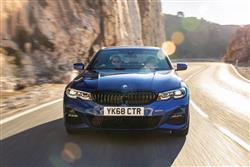 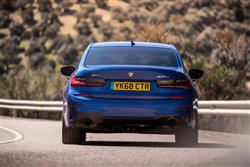 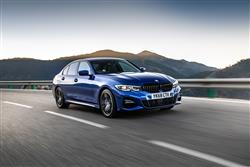 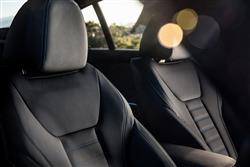