BMW knows a thing or two about roadsters and this third generation Z4 is one of its best, especially in this improved form. It may not be the sharpest car in its class to drive but on the right day, in the right mood on the right road, you may not care. The engines are efficient and willing, the looks are stunning and the feeling you get behind the wheel still makes you feel twenty years younger. This, it seems, is a Z that might be very hard to catch.

It took BMW some time to discover a profitable sweet spot in the roadster segment but the Munich maker got there in the end. Having first brought us an exclusive low volume model in this sector (the Z1 of 1989), the brand finally launched an affordable volume contender (the 'E36'-series Z3 of 1995). That sold well enough to be replaced by the slightly larger and more mature first generation 'E85'-series Z4 in 2002. Which itself was replaced by a second generation metal folding-roof 'E89'-series Z4 design in 2009. With the history lesson completed, let's acquaint you with what we're looking at here, a MK3 'G29'-series Z4 model launched in late 2018 after development shared with the new-era Toyota Supra. It claimed to be something its direct predecessor really wasn't and BMW sold 55,000 units globally in a diminishing segment before the light mid-term update that we profile for you here. As before, this Z4 sets out to be a really serious driver's car. And a really serious Porsche 718 Boxster rival. But is it a really serious roadster? Let's find out.

There are no mechanical or handling changes for this updated Z4, but it's worth pointing out that the specification for the four cylinder Z4 20i now includes M Sport suspension and variable sport steering as standard. That 197hp TwinPower Turbo 2.0-litre model is now the only four cylinder Z4 you can have, the previous 258hp Z4 30i variant having been deleted. Still, the 20i is pretty rapid, making 62mph from rest in just 6.6s on the way to 149mph. At the top of the range, you can still have a traditional BMW straight-six unit, courtesy of the 340hp engine fitted to the flagship M40i derivative, which sprints to 62mph in 4.6s and has to be artificially restrained at 155mph. Both variants come fitted with an 8-speed Steptronic Sport auto gearbox with gearshift paddles. On the 20i, you're probably going to want to pay extra for adaptive damping - only the M40i gets it as standard, along with uprated brakes and an electronically controlled differential lock. The way the suspension interacts with the steering, the throttle and the differential is key to the way this car responds dynamically, so proactive use of the provided drive modes is crucial if you're pressing on. Do that and you'll find that this car lacks the razor-sharp steering responses of a rival Porsche 718 Boxster, but the helm is quick and accurate, which in combination with superb front-end traction means that corners can be attacked with surprising confidence. Which is the kind of driving experience you'd want a proper roadster to be able to deliver. The fabric roof suits this car far better than the metal-folding top fitted to the pre-2018-era 'E89'-series version. It can be opened or closed in ten seconds at up to 31mph.

Changes to this updated Z4 are subtle, with a revised grille aiming to make the car look wider; and detail touches like smarter 18 or 19-inch wheels, exterior mirror caps in Cerium Grey and trapezoidal tailpipe trims for the exhaust. 'M Sport' trim is now a non-negotiable for the four cylinder version, which gets you three-section air intakes in the front apron, distinctive side-sill contouring and a rear apron with bold edging at either side. The side air intakes have been remodelled too. As before, hallmark Z4 exterior features include large air intakes, LED headlights with vertically arranged light sources and a long bonnet, which stretches over the wheel arches. And of course there's a fabric top, in contrast to the folding metal top of the pre-2018-era 'E89'-series version. This operates in around ten seconds and allows for the same amount of luggage space whether the roof is up or down (281-litres). In proper roadster style, there are no rear seats. There are no changes inside, so the same customisable screens for the fully digital instrument cluster and control display remain, both of which have a diagonal of 10.25-inches. The centre screen's functionality includes the BMW Maps navigation system, a hard-drive-based multimedia set-up, BMW Intelligent Personal Assistant voice control, smartphone integration and a Wi-Fi hotspot. The instrument panel is trimmed in stitched leather-like 'Sensatec'. And seat heating, a wind deflector, extended load-through storage, Park Distance Control with sensors at the front and rear, an automatically dimming rear-view mirror and two-zone automatic climate control all feature as standard.

Take a long deep breath before looking at the asking prices, which start at around £42,500 for the four cylinder Z4 20i M Sport and rise to just under £54,000 for the top six cylinder Z4 M40i - those the only two remaining variants on offer. Still, those figures do now include more equipment, notably with the 20i version the uprated 'M Sport' trim level you'd probably have wanted to stretch to anyway. that brings a smarter look and standard M Sport suspension. Plus 18-inch M light-alloy wheels in a double-spoke design (with 19-inch rims optional); and, inside, Vernasca leather upholstery, which can be specified in Black, Ivory White, Cognac or Magma Red. There are three new exterior metallic colour choices - 'Thundernight', 'Portimao Blue' and 'Skyscraper Grey'. And the fabric soft-top will continue to be offered in Anthracite Silver effect as an alternative to the standard black. New to the options list is the 'M lights Shadow Line' styling pack, which can be ordered in conjunction with optional Adaptive LED Headlights. The headlights' dark inserts help imbue the front end of the car with a discreetly sporting aura. And they form a neatly judged composition with the car's 'M high-gloss Shadowline exterior trim' which has extended elements. A host of state-of-the-art driver assistance systems come included: Front Collision Warning with brake intervention, Lane Departure Warning including lane return, and the Speed Limit Info function with no-overtaking indicator. Among the drive assist items on the options list are the Active Cruise Control with Stop&Go function, Lane Change Warning, rear collision warning, crossing traffic warning, the Parking Assistant and the Reversing Assist Camera. Also available is the BMW Head-Up Display, which projects driving information onto the windscreen.

These days, even barnstorming sports cars need to keep running costs in check while treating the environment with kid gloves. The Z4 does a better job of this than you'd credit for a car in such a lofty performance bracket, mainly thanks the BMW's EfficientDynamics programme. Thanks to this, assuming you keep an eye on the optimal gearshift indicator, you should be able to get somewhere close to a combined cycle fuel figure which for the four cylinder engine is quoted at up to 40.9mpg on the combined cycle and up to 157g/km of CO2. As for the six cylinder M40i model, well you're looking at up to 35.8mpg and up to 179g/km. Routine maintenance is dictated by 'Condition Based Servicing' that monitors oil level and engine wear, taking into account how long it's been and how far the car has travelled since its previous garage visit. To help plan ahead for the cost of regular work, at point of purchase you'll be offered a 'BMW Service Inclusive' package that lasts for three years and 36,000 miles. BMW offers a warranty that lasts for three years, no matter how many miles you complete.

For the magazines, the definition of success for this MK3 model Z4 continues to lie in whether it handles just like the equivalent Porsche Boxster. But for most potential owners, that won't be the over-riding priority. BMW has been building roadsters for over 80 years - and it shows with this third generation design, a model that's matured extremely well, slowly and methodically developing into an all-rounder that's tough to beat. In fact, I can't help feeling that this is probably the ideal car of its kind for most potential buyers. True, it isn't the driver's machine that its Porsche rival can be, but it gets close enough for many likely customers to start prioritising the lower pricing and nicer cabin that you get with this Munich model. What it all means is that though the Z4 might not be the first car you look at when choosing a sports roadster, look at it you must. It's now just too good not to. 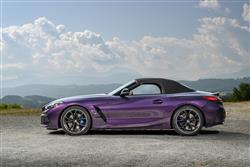 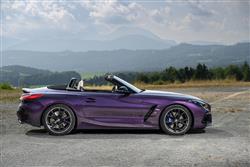 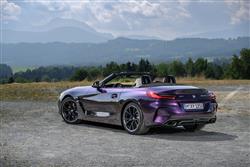 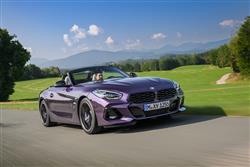 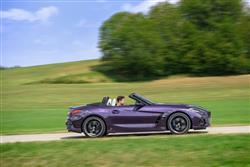 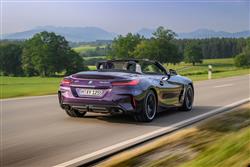