Citroen's third generation C3 supermini is a crucial car for the French brand and must be more interesting and likeable than its sensible predecessor. Can it deliver? Jonathan Crouch checks it out

Citroen's third generation C3 supermini has a much more distinctive style this time round, with quirky looks, a very individual feel and even the option of a clever dash cam camera. Ultimately, there's nothing really revolutionary on offer here but as a complete and highly personalisable package, it's desirably different.

What should a modern Citroen be? Not like the second generation C3 supermini, that's for sure. Today to survive, the brand must offer more than just sensible efficiency: the PSA Group has its Peugeot brand to deliver that. And its DS nameplate to offer a fashion-conscious premium option for those prepared to pay a little more. Which leaves Citroen needing to go back to being the kind of manufacturer it once was, fun, innovative and different. Which, at first glance at least, appears to be what's served up here. The look is unique, can be embellished by a two-tone paint option and incorporates the unusual 'Airbump' side panels we first saw on the brand's C4 Cactus crossover model. Plus there's some interesting technology that you won't have seen before on this class of car.

Small French cars used to ride beautifully, grip tenaciously and flow from corner to corner with relaxed, unflustered motion. As, by and large, this one does. It may come as news to some motoring journalists but most supermini buyers don't routinely want to throw their cars about as if they were on stage from the RAC Rally. What most of them would prefer is a model that rolls the red carpet over the average appallingly surfaced British road. As, to a great extent, this one does. It's all down to the way that the fairly conventional suspension set-up has been tuned, though the downside of that is inevitably extra body roll through the bends. Stay with it though and you'll find that there's actually more grip and traction on offer than you might think. As for engines, well the PureTech three cylinder 1.2-litre unit is frugal and willing, while the 1.6-litre BlueHDi diesels are amongst the cleanest and most frugal engines of their kind in the industry. First up is the 1.2-litre petrol PureTech unit which offers either 83 or 110hp and delivers the same distinctive three cylinder thrum but accompanies it with pokier performance. The turbo 110hp variant gets a 6-speed manual gearbox and can be ordered with an optional EAT6 auto transmission. There's also a BlueHDi 100 diesel manual option with a 5-speed manual 'box.

The idea here is to offer supermini buyers a little more energy and personality and that's broadly what's delivered. At 3.99m in length, this car is slightly smaller than some of its rivals, but it's more interesting to look at. At the front, there's the distinctive two-tier front light signature we first saw on the current C4 Picasso. Double chrome strips extend from the double-chevron badge and go all the way across to slick LED daytime running lights. In profile, the black windscreen pillars and floating roof aim to accentuate the more dynamic shape. There's a deliberately high bonnet line, short overhangs, 3D rear lights and wheelarches fitted with extensions for a crossover-style look. Even more noteworthy are the 'Airbump' side panels - black plastic strips with air-filled bumps that look individual and create a scratch-proof surface to guard the bodywork from minor scratches and dents. Inside, Citroen says that it's drawn inspiration from travel and home interior design to create an interior that aims to feel like an extension of the driver's home. The perception of space is heightened by the horizontal dashboard, which runs across the whole width of the vehicle. The design of the interior trim and the shape of the chrome-finished air vents also combine to enhance the perception of width. Customers get a choice of cabin finishes and you can also have a panoramic sunroof that fills the cabin with natural light. Out back, there's a decently-sized 300-litre boot.

Pricing is a little higher than it used to be because Citroen no longer offers entry-level 'Touch' trim in our market. That means a price range which now spans the £16,000 to £20,000 bracket. There's a choice of three trim levels - 'Feel', 'Origins' and 'Flair Plus'. Potential buyers will need to make sure that they leave some budget aside for personalisation. Even base 'Feel' trim gets you 16-inch 'Matrix' alloy wheels, MirrorScreen smartphone-mirroring with Apple CarPlay and Android Auto, Lane Departure Warning, automatic air-conditioning, a 7-inch colour touchscreen and a choice of up to four optional roof colours. Plus there are some really clever optional touches. Of these, our favourite is the 'ConnectedCAM Citroen' system. Here, you get a forward-facing two-megapixel, GPS-enabled camera mounted in the rear-view mirror. It's there for two reasons; sensibility and fun. The 'sense' bit lies in its capability to record any traffic incidents or accidents, since it activates in an impact and stores the preceding 30 seconds and following 60 seconds. However, there's a fun purpose too, given that the driver can also click a button to safely take exterior photos or videos of the view through the windscreen and then share this content through social networks. We also like the Citroen Connect Nav system that comes with a 7-inch touchscreen and ties into connected services like TomTom traffic. This display also incorporates Mirror Screen technology which enables owners to you Apple CarPlay and Android Auto systems to link in their smartphones and use selected apps on the move.

Almost every fashionable type of technology has been thrown at this car to drive its running costs down and, as you'd expect, the best returns can be achieved from the BlueHDi diesel model. Most will choose a petrol model though. The PureTech 82 variant manages up to 51.5mpg and 10-8g/km. And for the PureTech 110, it's up to 49.8mpg and up to 106g/km. Enough on engine efficiency. What about other financial considerations? Well, regular service intervals come round every 16,000 miles or 12 months, depending on which comes sooner. For many supermini owners, this will mean a visit to a dealer once a year and there are plenty of Citroen outlets to choose from, so you should never be too far from one. So you can budget ahead, the French maker offers its 'Citroen Maintenance' scheme that lets you pay either a one-off fee or monthly instalments to cover the cost of the routine upkeep of your car for as long as three years and 35,000 miles.

This third generation C3 supermini is a far more buyable prospect. True, as superminis go, this isn't an orthodox choice, but then that's part of its appeal. In time honoured Citroen fashion, a C3 is just that little bit different, with smart, slightly quirky looks and some fun aesthetic options if you want them. The interior's different too and we like the extra media connectivity and the clever ConnectedCAM system. Overall then, the C3 is at last a strong contender in the supermini marketplace. Best of all perhaps, it's a car that's distinctively Citroen. 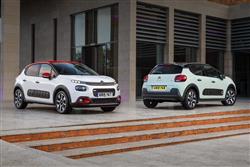 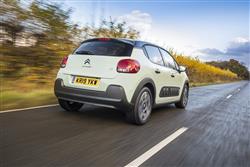 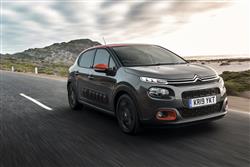