The DS3 supermini has proved to be a popular success story over recent years for customers in search of an affordable, sporty and well-finished three-door hatch. It's now a key model for the newly-created DS brand that Citroen has created - and has been regularly improved, most recently in the facelifted guise we're going to look at here. The basic recipe though, is much as before, with a three-door-only range of hard-top or Cabrio models, striking practical design both inside and out, a range of proven engines and a huge variety of personalisation options.

This DS3 is a trendy small car in the MINI or Fiat 500 mould. Nothing especially ground-breaking about that, you might think - but stop and consider for a moment. Before this car arrived, established thinking suggested that a fashionable little urban trinket of this kind had to have a 'retro' look, with style harking back to an older classic model: all very nice but also pretty cramped when it came to carrying people and packages. So the DS3 turned that thinking on its head, completely new and practical but also instantly iconic. Other brands have tried the same thing but few have done so with the success hat's been delivered here. In recent times, the formula has been subtly improved. Let's check out this revised facelifted model.

So what's it like to drive? Well, you get in and settle into a sculpted seat that's set sporty and low. Ahead of you, the compact steering wheel feels just right and all the vital dials are set in a deeply-cowled, chrome-edged triple pod. Turn the key and both speedo and rev counter zip around their dials and return to zero. You're ready to go. Under the bonnet, the key changes with this revised model centre on the introduction of a more efficient EAT6 automatic gearbox and a pokier 130bhp three cylinder 1.2-litre PureTech petrol powerplant. In all, seven engines are on offer, including an entry-level 110bhp PureTech petrol unit. There are also two THP four-cylinder petrol units, with the top 'Performance' model putting out 208bhp. Plus, as before, there are two 1.6-litre BlueHDi diesels. On the move, it's hard to believe that all the underpinnings of this car are basically borrowed from a conventional Citroen C3 supermini. The lower body and stiffer suspension set-up give this model a very different feel, as does the precisely-weighted electric power steering, offering assistance when you need it and plenty of road feel when you don't. The damping also offers the best of both worlds, making you aware of bumpy surfaces, but spiriting away the aftershock you could do without. It makes a MINI feel about as subtly sprung as a go-kart. Only the rather long-throw gearchange could be slicker.

As before, buyers get the option of either a three-door hatch bodystyle - or the same thing but with an electrically-folding fabric top. The key change with this facelifted DS3 is the introduction of the DS brand's corporate front end, with the so-called 'DS Wings' sculpted around a vertically-orientated chromed front grille that wears the DS emblem and is flanked by smarter LED headlamps. There are now more personalisation possibilities too, including options for the roof, the bodywork and the mirror housings. Inside, the cabin is much as before, but benefits from the addition of a freshly-added 7-inch colour infotainment screen that incorporates the latest smartphone-compatible technology. There are smarter trim choices too and the option of classic DS 'watchstrap leather' seating and laser engraving on the dashboard trim and the door mirrors. The DS designers claim there's room for five adults, with legroom in the rear enhanced by the slender backs of the driver and front passenger seats. In the tail, the boot of the hard-top version is 285-litres which is large for the supermini class and 60:40 split rear seats give options for extending that capacity. The Cabrio version of course has less space to offer - 245-litres - but that's not bad for a car of this kind.

Pricing is much as before, starting at around the £14,000 mark, but there's a premium of just over £2,500 to pay if you want the desirable Cabrio version. Still, at least all DS3 models are better equipped than they used to be. All variants now get front and rear parking sensors, a reversing camera with visual indicator guide lines on the 7-inch centre dash infotainment screen. That display is a fresh addition to the car and gives owners access to the latest smartphone-compatible 'MirrorLink' and 'Apple CarPlay' connectivity systems. The options list includes LED headlight technology and items such as cruise control with a speed limiter, a classy MP3-compatible stereo system with a sub woofer in the boot and the MyWay satellite navigation system. Safety equipment includes an 'Active City Brake' system that can autonomously brake the car if an accident hazard is detected at urban speeds. ESP stability control is of course standard along with an advanced ABS braking system and six airbags. Personalisation is a term that is cropping up with increasing regularity when we talk about trendy small cars and this revised DS3 further embraces it with things like a laser-etched dashboard strip and a screen-printed rear window. There are wider colour and wheel options too. As before, the roof, the mirrors, the dashboard, the rubbing strips and the wheels all come in various colours and whichever bodywork colour you choose, you get a matching key fob.

As you'd expect, the revised DS3 models feature efficient Euro 6 compliant diesel and petrol engines. Diesel drivers get the choice of 1.6-litre BlueHDi 100 and BlueHDi 120 units, both engines offering a good balance of power and efficidency. The BlueHDi 100 variant is class-leading in terms of emissions, producing just 87g/km of CO2. Fuel consumption's good too. Theoretically, the BlueHDi variant could be capable of over 90mpg and even the pokier BlueHDi 120 version can approach 80mpg. The French brand has also developed a Euro 6-compliant entry-level petrol unit, the 'PureTech 110 EAT6 auto'. Delivering 61.4mpg over a combined cycle and producing just 105g/km of CO2, this engine comes only with the brand's latest automated manual EAT6 transmission. The 5-speed 'box features a creep function and optimised software mapping, which adjusts power delivery for smoother starts and a better driving experience. Go for the PureTech 130 manual petrol model and you can expect 62.8mpg on the combined cycle and 105g/km of CO2.

The DS3 has always embodied everything that's good about its brand - and still does in this improved guise. Full of original ideas and delightful details, it's a design icon for the modern world. The sporty looks are backed up by an involving drive and, best of all, it's a car you don't have to shed the family to enjoy. It's very individual, very chic and very fashionable: a car of its time. 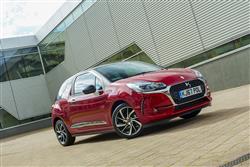 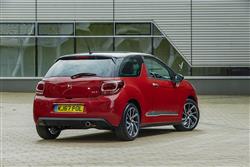 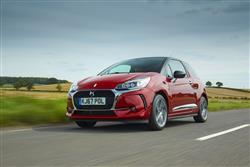 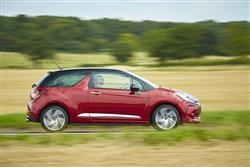 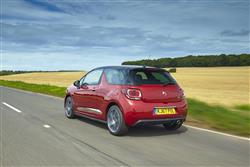 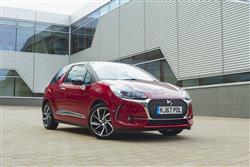