The DS 7 Crossback E-TENSE 4x4 represents this luxury French brand's more distinctive take on what a 'D'-segment luxury plug-in SUV should be. It can take you over 30 miles without emitting any CO2, manage 128mpg, sprint to sixty in six and a half seconds and even extricate you from a muddy carpark on your annual trip to Glastonbury. In short, it's a bit special - and is styled that way too.

Looking at the various electrified alternatives the current car-buying customer now has on offer, it's sometimes hard not to think that the plug-in hybrid option is arguably the best. Mild hybrid tech doesn't make much difference to overall efficiency figures. And full-electric models still carry the scourge of 'range anxiety'. So being able to plug in to extend the range of a conventional petrol engine with a lithium-ion battery charge makes as much sense now as it did when we first saw plug-in models hit the market, nearly a decade ago. When it comes to SUVs, you'll generally need a mid-sized or larger one to be able to specify plug-in technology. The PSA Group makes a number of the various 'C'-segment SUVs that offer it - cars like hybrid versions of the Peugeot 3008, the Citroen C5 Aircross and the Vauxhall Grandland X. Plus the French conglomerate has also used the same tech for a slightly larger, more luxurious model that sits in the 'D'-segment just above - this car, the DS 7 Crossback E-TENSE 4x4.

Unlike the DS brand's smaller electrified model, the DS 3 Crossback E-TENSE, this car isn't a full-electric SUV. Instead, a 200hp 1.6-litre petrol turbo engine beats beneath the bonnet, its efforts boosted by a 13.2kWh battery that powers an accompanying pair of 109hp electric motors which together boost total power output up to 300hp. That equates to a useful 450Nm of torque, which is transmitted to the tarmac via an eight-speed auto gearbox. 62mph from rest occupies 6.5s. When fully charged, this car can cover up to 31 WLTP-rated miles in zero emission form, though you won't go anywhere like that far if you explore the possibility for an 83mph all-electric top speed. There are four drive modes available. 'Zero emission' is the default setting, which sees functioning only using its electric motors. More commonly, you'll be running in 'Hybrid mode', which sees the electric motors and the engine efficiently working together. If you're pressing on, you'll use 'Sport' mode, which is engine-only. This is a 4x4 model and if you're off piste, you can make the most of that by engaging a '4WD' setting which activates the rear axle for all-wheel drive. So how does it all work in practice? Well as you might expect, the extra weight of all this electrified kit (around 400kgs) is certainly noticeable once you start pushing along a bit through the corners. But this is really only significantly evident once you start driving the car in a manner that few likely owners never will. Better to throttle back and enjoy the superb ride comfort and refinement and the relaxed, loping refined demeanour that suits this Gallic contender best.

Visual differentiation points setting this E-TENSE variant apart from more conventional models in the range are few. There's special badging. And this electrified variant can be had in this exclusive 'Pearl Crystal' paint shade. That's about it. The brand saves its boldest flourishes for the interior, which is intended to be an extrovert celebration of everything that's cutting edge in French fashion. Alcantara, open-pore wood inlays and leather feature in copious quantities appropriate to the Parisian-themed trim package you've chosen. The 'E' embossed onto the gearbox control is apparently a nod to the DS E-TENSE electric Concept Car Even the techno-fest that must rather incongruously fit in around all of this frippery can't escape the Louis Vuitton treatment. So the super-sized 12-inch infotainment touchscreen that struggles to fit in at the top of the centre stack gets a strange barrel-style crystal-like centre volume dial. Rear seat space is good; even for a six-footer sitting behind quite a lanky front seat occupant, the legroom on offer should be quite sufficient. The backrest reclines from 23 to 32-degrees in rake - electrically on this top model - which is nice for longer journeys. Unfortunately though, there's no sliding mechanism for the seat base, which is a pity. What you can't have with this Plug-in variant is this model line's usual third seating row. In compensation, out back, the boot of this electrified model is exactly the same size as that of a conventionally-engined five-seat model, 555-litres in size. Which is massively better than the restricted 395-litres you'd get in a directly comparable Audi Q5 TFSIe.

The case for plug-in hybrid powertrains can seem quite compelling - or at least it would be if this technology was more affordable. In the case of the DS 7 Crossback E-TENSE, it adds around £9,500 to the cost of an equivalent BlueHDi diesel model, a not insignificant premium. Though when you get right down to it, the cost of this car isn't actually very much higher than Peugeot is asking for the directly equivalent version of its Hybrid 4WD 3008. To be specific, prices for the DS 7 Crossback E-TENSE 4x4 start from around £48,000, a sum which buys you the most affordable 'Performance Line' variant. Another £3,000 gets you mid-range 'Prestige' trim. And if you can find just over £56,000, you can get yourself the top 'Ultra Prestige' flagship variant we're trying here. These figures are roughly in line with what you'd pay for direct competitors like Audi's Q5 TFSIe and the Volvo XC60 T8. All versions of this model get big 19-inch wheels and 'DS Active LED Vision' headlamps that adapt to road conditions and feature high beam assist. Inside, also standard are the two large cockpit screens - the 12.3-inch virtual instrument cluster and the 12-inch centre-dash infotainment screen that incorporates voice recognition and 'DS Connect Navigation'. Amongst other things, mid-range 'Prestige' models get the clever 'DS Active Scan' suspension system. And an upgraded 'Rivoli' trimming package that uses premium quilted Nappa leather and diamond-shaped decorative features. This top 'Ultra Prestige' variant features a special 'Opera' interior trimming package with a stitched leather dash, a panoramic glass roof, a premium FOCAL HiFi system and larger 20-inch wheels.

As with rival plug-in models in this segment, the efficiency figures here are certainly eye-catching. There's a 31 mile WLTP-rated electrified driving range. The WLTP mixed fuel consumption figure is rated at 128mpg. And the WLTP CO2 reading is 33g/km. The DS engineers reckon that even running the car in its more usual 'Hybrid mode' (whether the engine and the battery work together) you should still average under 50g/km. All of this assumes you keep the car fully charged. If you drift into using it just in petrol-powered form, your returns will drop like a stone. But let's assume you're fully bought into making full use of the electrified tech. On the move, energy is regenerated whenever the driver decelerates or uses the brakes, which extends the battery range. Another function, 'E-SAVE', also allows the driver to save enough energy to drive in all-electric mode for the last 6 or 12 miles of a journey. The map on the centre-dash touchscreen shows to the driver in real time the distance which can be driven in the car's all-electric 'Zero emission' mode or where charging stations are available nearby. This E-TENSE model's battery can be charged in two hours using a 32-amp wall-mounted terminal with a 6.6 kW charger; or in 8-hours with a traditional 3-pin domestic socket. What else? Well, a little annoyingly, the fuel tank is 20-litres smaller than it is in a conventionally-engined DS 7: blame battery packaging for that. Still, enjoy the tech. Through a provided 'MyDS' app, you can programme or switch on charging and follow your car's state of charge on your smartphone. The warranty is an unremarkable three year/60,000-mile package.

This car will be vanishingly rare. But then so are its direct competitors from Volvo and Audi. Perhaps incredibly, we're still some way from the financial tipping point that sees plug-in petrol engines make more sense than smoky diesels. Which is a pity because cars like this ought to be selling in greater numbers by now. Governments should be incentivising them. And manufacturers should by now have worked out a way to produce the technology more cheaply. But none of this has yet been sorted, so we are where we are. And where we are in this case is in a slightly different space than that occupied by competitor models from Audi and Volvo in this segment. The DS 7 Crossback E-TENSE has a more distinctive feel than those cars. Not one that'll suit everyone, but if you're sold into plug-in tech, want a luxury 'D'-segment SUV and likely the thought of something a little different, then this is where you might like to start your search. 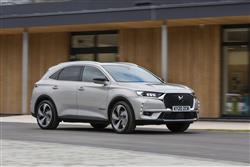 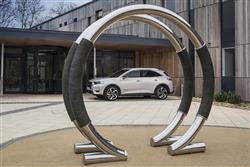 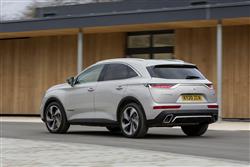 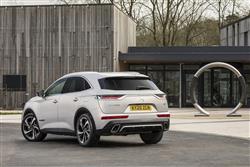 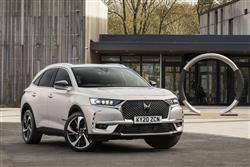 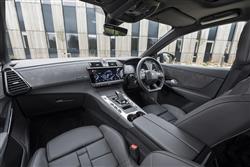