Ford aims for continued leadership of the supermini-shaped hot hatch segment with this car, the third generation Fiesta ST. Jonathan Crouch takes a look at what's on offer.

Want to know just how much fun it's possible to have in a ferociously fast small supermini? Then try one of these - Ford's Fiesta ST. It's been developed like a proper performance car - and drives like one, ready to paint a smile upon your face corner after corner. This time round, a 1.5-litre three cylinder engine replaces the old 1.6-litre 'four', but power's up to 200PS as standard and we're told the handling's sharper too. Of course, for not much more than the affordable prices Ford asks, you can buy more power. But after a drive in one of these, you probably won't want to.

We've never had a truly great sporting Ford Fiesta. The Blue Oval brand has tried of course, building up a hot hatch legacy around this model that goes all the way back to the XR2 of 1981, with a history subsequently embellished by the more powerful RS1800 and RS Turbo models that followed it. All though, were eclipsed by French hot hatch rivals, first a series of small Peugeot GTis, then in more recent years, the Renaultsport Clio. Today's third generation Fiesta ST - this car - must once again take on ever more sophisticated versions of those same two rivals, along with rejuvenated versions of the VW Polo GTI and the Suzuki Swift Sport. It's going to have to be good. But it just might be. Designed by enthusiasts to be driven by enthusiasts, this fast Fiesta's poised, priced to sell and, with 200PS now on tap, plenty quick enough. Potentially, it's the best car of its kind that Ford has ever brought us.

The previous Fiesta ST suffered a little on paper against obvious rivals by not being able to claim a 200PS output - at least in its standard form anyway. An ST200 version was later launched to rectify that oversight. This third generation car has 200PS in its ordinary form from the start, courtesy of a lighter, more efficient 1.5-litre EcoBoost three cylinder powerplant which replaces the previous 182PS 1.6-litre four cylinder unit. 62mph from rest takes just 6.5s on the way to 144mph. Also new this time round are selectable Drive Modes - enabling engine, steering and stability controls to be configured to Normal, Sport and Track settings. The Drive Modes will also adjust this Fiesta's Electronic Sound Enhancement technology and active exhaust noise control valve, which amplifies the sound of the engine note. But power of course is nothing without control - which is exactly where this Fiesta should really shine. With this MK3 model, the track is wider, the steering is quicker, the brakes are beefier and torsional stiffness is up by 8%. Pay a little extra and you can get a 'Performance Pack', which includes a Quaife limited slip differential, launch control and performance shift lights.

It's easy to go overboard and get all Max Power when it comes to a car of this kind, a temptation Ford has thankfully resisted here. This isn't the prettiest junior shopping rocket you can buy but the ST bodykit makes it playfully purposeful in demeanour. There's a choice of three of five-door body styles and gorgeous angular-spoked 18-inch alloys are fitted to the top 'ST-3' version. Things aren't quite so overt once you take a seat inside. Go for a base-trimmed version and you get two of the things that most set the cabin apart - blue seatbelts and the larger 8-inch centre-dash SYNC3 infotainment touchscreen. And rear seat space? Well, it's better than the claustrophobically rising beltline of the three-door body shape might lead you to expect. True, the heavily bolstered Recaros do slightly hinder your access into the back, but once you're there, the Fiesta surprises with headroom manageable even for a six-footer - though his or her legs will be crushed pretty snugly against the seat in front. There's also a 292-litre boot, extendable to 1,093-litres by flattening the 60:40 split-folding rear bench.

As usual with the Fiesta ST, there are three trim levels from which to choose - 'ST1', 'ST2' and 'ST3'. For the 'ST1', you're looking at needing £19,000, a sum that gets you selectable drive modes - new to ST - as well as a flat-bottomed steering wheel, Recaro seats and ST sports suspension as standard. All Fiesta ST models are also equipped with electric, heated door mirrors, Ford's SYNC3 DAB radio with Apple CarPlay and Android Auto capability, cruise control and an 'NCAP Pack', which includes a Lane-Keeping Alert and a speed limiter. The 'ST-2', which costs £1,000 more in three-door guise and £1,650 more in five-door form, adds climate control, heated Recaro front seats and blue seatbelts, a B&O PLAY premium sound system and a Ford SYNC3 DAB radio with a larger eight-inch touchscreen as standard. The top 'ST-3' version gains 18-inch alloy wheels and red brake calipers, satellite navigation, automatic rain-sensing wipers, an auto-dimming rear view mirror and driver assistance features including Traffic Sign Recognition, auto high beam and driver alert. The three-door ST-3 is priced from around £21,500 while the five-door model starts from just over £22,000. All Fiesta ST models are also fitted with specially-developed Michelin Pilot Super Sport tyres, available for both 17in and 18in alloy wheels. Go for the 'ST-2' or '[ST-3' variants and you'll get the option to specify an extra-cost 'Performance Pack', which includes a Quaife limited slip differential, launch control and performance shift lights.

The whole point of sporty Fiestas has been to offer a generous slice of fun coupled with modest running costs, a trend which continues with this third generation ST. The whole point of switching from the previous model's 1.6-litre four cylinder unit to this MK3 model's 1.5-litre three cylinder unit was to boost efficiency and, sure enough, the old 182PS model's unremarkable figures - 47.9mpg on the combined cycle and emissions of 138g/km - are easily matched here, even though power has risen to 200PS. Thanks to clever cylinder deactivation technology, you're looking at 47.1mpg and 136g/km. The inherent efficiency of the EcoBoost 1.5-litre engine certainly helps this Fiesta's cause, as does Ford's recent design focus on reducing body weight despite an increase in size. There's also a shift indicator on the dash for more efficient gear changes. Keep an eye on it and, for the times when you're not behaving like a hooligan, over 40mpg should be achievable on a regular basis. What else? Well, if you're thinking of doing a few track days - and so much fun is this car that it'd be a shame not to - remember to budget for extra wear on brake pads, discs and tyres. That only leaves depreciation. If you're a prospective customer, then you'll be glad to hear that Fiesta residual values are on the up as both new and used markets respond well to the increase in quality of the latest generation car.

Ford retains market leadership in the junior hot hatch segment with this car. That's the headline news with this third generation Fiesta ST. It'll be a best seller on merit. This really is a special little car, usable every day but as focused as you could want when your favourite road opens up and you can flex your right foot, sink into the grippy Recaros and dial up a responsible amount of red mist. We'd also honestly say that it's pretty much the only car in its segment that's ultimately rewarding enough to consider taking on a trackday. Which, we think, says everything, the difference, if you like, between a supermini with skirts, spoilers and a more powerful engine - and a properly developed performance car. Which is what this is, as much a go-to choice in its market sector as a Porsche 911 would be if you were looking for a performance sportscar or a Lotus Elise might be for those in search of a Roadster. In all honesty, you'd have more fun in this little Ford on a public road than you ever could in something pricier and more powerful. Think of it as one-up for the common man, small perhaps in price and performance but big in smiles per mile. Which, at the end of the day, is exactly what a hot hatch should really be all about. 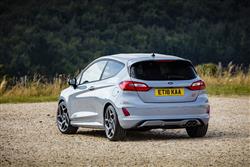 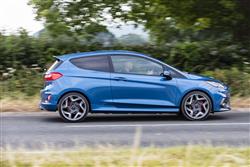 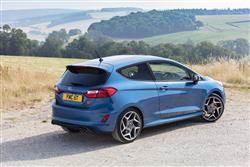 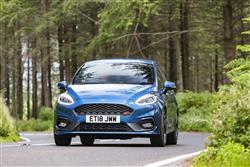 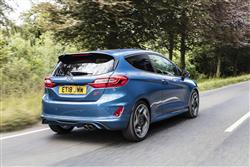