Ford's Focus ST hot hatch is back, with a mission. Jonathan Crouch drives it.

Ford's fourth generation Focus ST is now smarter, classier and more dynamically adept. In hatch or estate guise, with petrol or diesel power, it's a car that's now easier to get the most from. And a machine you can enjoy to the full on your favourite road without afterwards having to pay for it with the kind of over-firm ride you simply don't want in everyday traffic. Ultimately, so many quick cars can feel.... well, rather irrelevant. Here's one that's anything but....

'ST' is a badge that, when it comes to Ford, stands for 'quick but not concussive', a performance level that sits just above the company's fast-but-family-friendly 'ST-Line' models. But just below their track-spec RS derivatives. A badge applied to the kind of car a red-blooded racer could afford, enjoy and use every day. A car like this - the fourth generation Focus ST. The Focus ST is the kind of car that's always democratised performance, giving you something of the speed of a supercar within the body - and the budget - of something much more ordinary. Other brands promise this kind of thing but in reality, often do little more than bolt a set of spoilers and a turbo onto something more mundane. Ford though, has a different approach, the Blue Oval brand boasting a long history of developing proper performance versions of its mainstream models, designed by enthusiasts to be driven by enthusiasts. That's certainly seems to be what's been delivered with this MK4 Focus ST. Let's take a look.

There are plenty of very significant changes over the previous generation model. We'll start with the fresh engine line-up, which offers 12% more power and 17% more torque than before. There are two units on offer; an entry-level 190PS 2.0-litre EcoBlue diesel and the powerplant you'll probably prefer, a 280PS 2.3-litre EcoBoost petrol unit. Buyers choose between a 6-speed manual gearbox or a new quick-shifting 7-speed auto transmission. Selectable Drive Mode technology is introduced on a Focus St for the first time, enabling drivers to adjust the car's character to suit the kind of drive experience they want. The various settings tweak steering feel, throttle response, stability control thresholds and, on petrol models, suspension response too, courtesy of the 'CCD' 'Continuously Controlled Damping' system that's standard on the EcoBoost models to further improved the sophisticated 'SLA' multi-link suspension set-up. Go for the petrol derivative and you also get an 'e-LSD' Electronic Limited Slip Differential. The system uses hydraulically activated clutches to limit the engine torque delivered to a wheel that has reduced traction on the road surface, and redistributes up to 100 per cent of available torque to the wheel with more traction to counteract wheel spin that can hamper acceleration through, and out of, corners. You'll want to know how fast it is; well, plenty quick enough. Thanks to 420Nm of torque, the EcoBoost petrol version uses the most free-revving Focus ST engine ever and sprints to 62mph in less than six seconds.

One area where the previous third generation Focus ST clearly regressed was stance. Ask any petrolhead and they'll tell you that the way a car sits on its wheels is a pretty fundamental part of its visual appeal. Some cars look squat, muscular and purposeful. The third generation ST never really managed that. There was just too much air under its wheel arches and the front end looked high and gawky. Remedial work has very much been conducted with this latest model. The body kit gives it a lower, wider stance, the bonnet is more aggressively sculpted. A larger, more steeply angled rear roof spoiler increases downforce to support the Focus ST's driving dynamics. A twin exit tailpipe configuration borders the aggressively styled rear diffuser element, and improves practicality by delivering the towing capability that was prevented by the centre-exit tailpipes of the previous generation Focus ST. The cabin is well trimmed, featuring a great set of Ebony coloured part-leather-trimmed Recaro sports seats with cushion tilt and length adjustment. Other neat touches include a grippy sports steering wheel, an ST-embossed aluminium gear knob and scuff plates, alloy pedals, metallic hexagonal and satin silver decorative elements, plus metal grey stitching for the seats, door inserts and centre console.

Focus ST pricing starts at a fraction under £30,000, so it's no longer the bargain it once was, though Ford points out that this is explained to some extent by the fact that stripped-out entry-level trim packages are no longer offered. There's just a single spec this time round, though you do get the choice of either five-door hatch or Estate body styles, the latter requiring an £1,100 premium. Either way, there's the choice of either a 190PS 2.0-litre EcoBlue diesel engine or, for around £2,500 more, the 280PS 2.3-litre EcoBoost petrol unit that most will want. If you think that premium sounds quite high, bear in mind that it gets you not only a more powerful engine but also adaptive 'CCD' damping and an 'e-LSD' Electronic Limited Slip Differential. All variants come well equipped with 19-inch 5x2-spoke alloy wheels, Adaptive LED headlamps, LED tail lights and a full body kit including a large rear spoiler, plus there's unique ST Sport suspension. Inside, you'll find part-leather Recaro seats, a 675-watt 10-speaker B&O audio system, alloy pedals, polished stainless steel scuff plates, a heated steering wheel, keyless entry and adaptive cruise control.

Though the petrol version of this model uses a higher-capacity engine this time round, a lot of work's gone in to try and make sure that overall efficiency won't be affected. The EcoBoost powerplant uses a low-inertia twin-scroll turbocharger, which scavenges exhaust gas energy more effectively than the old 2.0-litre unit, using separated channels to minimise interference between gas pulses. An electronically actuated waste-gate allows closer control of boost pressures for optimised engine performance. In addition, a unique exhaust system that reduces back pressure, bespoke air intake system and optimised intercooler further improve breathing. Let's get to the figures. The 2.3-litre petrol version manages up to 34.4mpg on the WLTP combined cycle and 179g/km of NEDC-rated CO2. For the 2.0-litre EcoBlue diesel, the figures are 50.4mpg and 125g/km. What else? Well we'll tell you about servicing. Two pre-paid servicing plans are available and maintenance bookings can be done online through the 'My Ford' portal. This is part of the 'Ford BlueService' scheme that wraps up all of the care and maintenance of your car into one bundle that includes a free 30-point 'eCheck' of vital parts and highlights any work required with a red, amber and green traffic light warning to rank items that need attention in order of importance.

Let's be clear: the previous MK3 model Focus ST was a very good car indeed. But it wasn't as involving and rewarding as its little Fiesta ST stablemate. It wasn't the car it could have been: now it is. This fourth generation Focus ST is now the very definition of what a car of this kind should be, a guilt-free fast hatch with near-supercar performance and technology that's relatively affordable and perfectly practical. We're promised here a class-leading ride and handling balance, there's estate versatility if you want it and you get the option of low diesel running costs if that's needed. All without compromise in a car that deserves to be remembered fondly in a fine tradition of fast Fords. 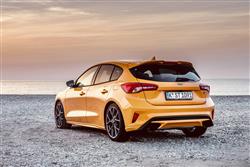 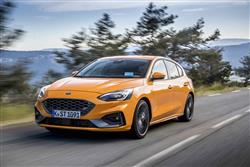 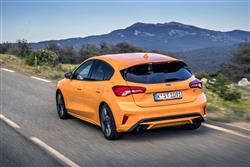 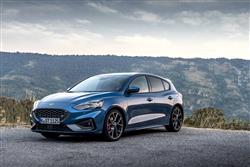 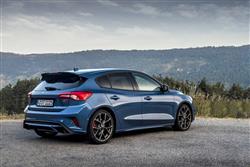 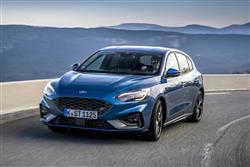