Kia has taken a further step forward in the family hatchback sector with the third generation Ceed. Jonathan Crouch checks out the improved version.

In this third generation guise, Kia's Ceed has further sharpened its proposition in the Focus-class family hatchback segment, with smart looks, extra technology and the option of clever 'level 2' camera safety technology. As before, value continues as a strong suit and there's an industry-leading warranty. Potentially then, there's a lot to like here.

If you want to better appreciate just why Kia is one of the world's fastest growing automotive brands, you've only to look at this car, the Ceed family hatchback. The Slovakian factory that builds it only opened its doors in 2006 yet already, well over a million cee'd models have been built. Automotive historians will look back at the original cee'd as a landmark design, the first to take on the European and Japanese market leaders on their own terms in the volume Focus and Golf-dominated Family Hatchback sector. Built in the heart of Europe, it was targeted at the heart of the European motor industry, hence the unusual 'cee'd' name, a combination of the French abbreviation for European Community (CE) and this car's project title (ED). It shamed the established players by matching their quality while massively undercutting their prices and offering an astonishingly long 7-year warranty. But times change - and so do market segments. So Kia has re-designed this car with a more athletic look and added more efficient engines and extra technology.

You can't fault the way that Kia has gone about this. Clearly, someone in Seoul has looked at just what makes the best family hatchbacks great and gone to much trouble to try and emulate them. In fact, the latest fully-independent suspension system is much more sophisticated than the cruder torsion beam arrangement you get on mainstream Golf and Focus models and aims to provide drivers with more agile and immediate handling responses, complemented by revised spring and damper rates and a faster steering rack. The ride has been developed on Europe's wide variety of road surfaces, remaining comfortable while giving drivers the confidence of tighter body control under cornering and stability at higher speeds. Some of this tuning happened in the UK to ensure the Ceed performs well on our unique roads. Under the bonnet, petrol options include an updated version of Kia's popular 1.0-litre T-Gdi engine, producing 118bhp, as well as a new 1.4-litre T-Gdi power unit. Replacing the earlier 1.6-litre GDI unit, the new 'Kappa' 1.4-litre T-Gdi powerplant produces 138bhp. In addition, this Ceed gets Kia's latest 'U3' diesel with 114bhp and 280Nm of torque. Every engine is paired with a six-speed manual transmission, while the 1.4-litre T-Gdi and 1.6-litre CRDi engines are also available with Kia's seven-speed double-clutch transmission.

The look of this third generation Ceed is the work of Kia's styling chiefs Gregory Guillaume and Peter Schreyer and aims to carry forward the emotional appeal of recent brand models like the Stinger GT. It's constructed on Kia's latest 'K2' platform and is lower, wider and has a longer rear overhang than previous generation model, plus there's a 'cab-rearward' silhouette that's supposed to exhibit 'a more mature sense of athleticism'. Straight lines replace the rounded-off edges of the old generation Ceed, evolving the front of the car with a wider 'tiger-nose' grille and lower air intake, and precise, linear shapes framing its 'face'. Inside the cabin, the main recent change has been the adoption of a slightly larger 8-inch centre-dash media screen for standard models - which will be enlarged to 10.25-inches if you specify navigation. Top 'GT-Line S' variants get a 12.3-inch digital instrument cluster too. Otherwise, it's as before. There's decent headroom in the front row and a low-ish driving position. High-quality materials have been used throughout and surfaces are finished with metallic or satin chrome trim, with buyers able to choose from a range of cloth, synthetic leather or genuine leather upholstery. The dash is split into an upper area - for the 'floating' touchscreen infotainment system - and a lower area, housing controls for audio and heating and ventilation. Driver-centric in its layout, the centre console is angled slightly towards the driver's seat for ease of use on the move. Out back, there's a large 395-litre boot, as well as decent shoulder room for rear passengers.

Pricing sits in the £18,500 to £29,000 bracket for the five-door hatchback body shape - there's also an alternative Sportswagon estate variant. Whichever Ceed you choose, you'd expect to find it decently equipped - it is - but the key change this time round is the addition of much more safety technology. In addition to the car's seven standard airbags, included kit runs to High Beam Assist, Driver Attention Warning, Lane Keeping Assist and Forward Collision Warning autonomous braking with Forward Collision-Avoidance Assist. Plus Kia's now moving into the realm of 'Level Two' autonomous driving technology. This MK3 Ceed is available with Lane Following Assist, which tracks vehicles in front of the vehicle in traffic, and identifies appropriate spaces in other lanes to move into safely to gain more ground in heavy congestion. It detects road markings to keep the Ceed in its lane on the motorway, and controls acceleration, braking and steering depending on the convoy of vehicles in front. Additional available technologies include Smart Cruise Control with Stop & Go, Blind Spot Collision Warning, Rear Cross-Traffic Collision Warning, Smart Parking Assist, and pedestrian recognition with haptic steering wheel warnings for the Forward Collision-Avoidance Assist system.

No car in this sector can afford to go to market with second-rate economy and emissions figures. So how does this one fare? The 1.0-litre T-GDi petrol engine delivers NEDC emissions rated at 115g/km. For the 1.4-litre T-GDi power unit, emissions are rated at 127g/km when fitted with the seven-speed dual-clutch transmission. Manual models emit 131g/km. The big news with this third generation model is Kia's latest 'U3' diesel engine. Designed to go beyond the stricter limits laid down by the latest Euro 6d TEMP emissions standard, this 1.6-litre CRDi (Common-Rail Direct injection) unit uses Selective Catalytic Reduction active emissions control technology to significantly reduce emissions. Hence a reduction in particulate matter and Nox compared to earlier Kia diesel engines. And improved CO2 readings of course. With a six-speed manual transmission, the 114bhp version emits 100g/km of CO2. Models fitted with a dual-clutch transmission produce 108g/km. As usual, there's also Kia's lengthy 7-year warranty as part of the deal.

There will still be people of course, who'll blindly buy a Focus, a Golf or some other family hatchback from a conventional mainstream brand without considering its Korean alternative. But these will largely be uninformed folk yet to fully cotton on to the way that products in this segment have changed. Thanks to the continuing success of this Ceed model line, there are fewer and fewer customers of this kind around. Of course, shortlist selection isn't the same as a sale. There are family hatch folk who'll want more powerful engines or more dynamic handling than this car can offer. But, I'd suggest, many more will enjoy this Kia's sharp looks, impressive quality, strong safety standards and low running costs. True, the asking prices may be a little higher than you might expect from a South Korean brand, but don't judge them until you've tried the product, a confident design from a very confident brand. We think you might like it. 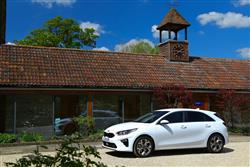 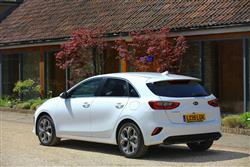 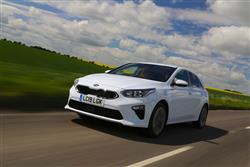 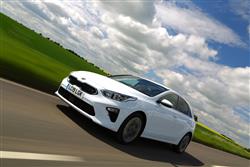 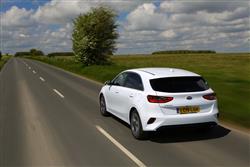 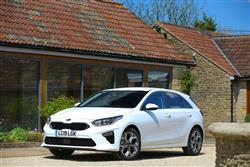