There's a lot to like about the third generation Kia Ceed, but those looking for more of the good stuff will be attracted to the now-larger Sportswagon estate model. Offering 625-litres of luggage room with the rear seats upright, it's got space aplenty. Plus there's a new diesel engine, sharper looks, improved safety and updated media connectivity.

The discipline of turning a family hatchback into a modest estate car doesn't seem, on the face of it, to be too taxing an assignment but look back at some of the designs we've been offered down the years and there have been some proper horror scenes, vehicles that look like normal hatches being mounted by an amorous propagator. Examples include the weirdly broken-backed Citroen BX estate and the unhappy looking Fiat Croma estate. There's none of that here. Indeed, the Ceed Sportswagon has turned out to be quite an elegant thing. This time round, it loses the silly apostrophe in its name as well as the relatively cramped cargo area conditions that characterised the old model. And the better diesel and petrol engines on offer are much more up to date.

The Ceed Sportswagon is a vehicle that builds on the hatchback's reputation for exceeding customer expectations. It's a Kia, so you might reasonably expect a few corners to be cut under the surface to make it that little bit more affordable, but check out the sophisticated multi link rear suspension and then look at the more rudimentary torsion beam rear ends of a Renault Megane Sport Tourer or a Vauxhall Astra Tourer Sports Tourer and consider who might have been making savings. The ride has been developed on Europe's wide variety of road surfaces, remaining comfortable while giving drivers the confidence of tighter body control under cornering and stability at higher speeds. Some of this tuning happened in the UK to ensure the Ceed performs well on our unique roads. Under the bonnet, petrol options include an updated version of Kia's popular 1.0-litre T-GDi engine, producing 118bhp, as well as a new 1.4-litre T-GDi power unit. Replacing the earlier 1.6-litre GDI unit, the new 'Kappa' 1.4-litre T-GDi powerplant produces 138bhp. In addition, this Ceed gets Kia's latest 'U3' diesel with 114bhp and 280Nm of torque. Every engine is paired with a six-speed manual transmission, while the 1.4-litre T-GDi and 1.6-litre CRDi engines are also available with Kia's seven-speed double-clutch transmission. There's also a plug-in model, which mates a 139hp 1.6-litre perol engine with an 8.9kWh battery pack and a 44.5kW electric motor.

Sharing near-identical dimensions to the five-door hatchback, this estate variant features a longer cargo area and rear overhang, plus a subtle tailgate spoiler. The rear overhang is extended by 115mm (now 1,070mm) compared to the previous model. At 4,600mm in overall length - 95mm longer than its predecessor - the new model offers significantly more cargo space. To be specific, the boot is 97-litres (18%) larger than the outgoing model, expanding to 625-litres in capacity - larger than most D-segment tourers in the next estate class up. The boot lip is also substantially lower - the lower lift-over height makes it easier to load heavier items into the boot. C-segment tourer customers' expectations go beyond cargo capacity, so Kia's designers have ensured versatility and usability are key strengths for the Ceed Sportswagon, making it one of the most practical cars in its class. The split-fold rear seats are fitted in a 40:20:40 configuration and can be folded remotely with a single touch from a lever just inside the tailgate. With the seats folded, the boot floor is completely flat. Every Ceed Sportswagon features an underfloor box to secure or hide smaller items, as well as a tonneau cover and a bag hook to prevent groceries and other items rolling around the load bay. Integrated roof rails are also fitted as standard to facilitate supplementary stowage.

It's interesting to see how Kia has managed the issue of rising costs. In order to make this model drive as well as its rivals and feel as well built as the better cars in the family hatch class, prices have had to go up. To the point where this Ceed Sportswagon doesn't really cost much less than competitors like, say, a Focus Estate or an Astra Sports Tourer. Prices start at around £19,000. To try and maintain value as a unique selling point, this has forced the Korean maker to include more standard equipment than rivals and forgo the potential revenue that might otherwise come via the sale of optional extras. That's why the Ceed Sportswagon includes a bunch of gear that you'd normally be ticking boxes for in many of its rivals. The key change this time round is the addition of much more safety technology. In addition to the car's seven standard airbags, included kit runs to High Beam Assist, Driver Attention Warning, Lane Keeping Assist and Forward Collision Warning autonomous braking with Forward Collision-Avoidance Assist. Plus Kia's now moving into the realm of 'Level Two' autonomous driving technology. This MK3 Ceed is available with Lane Following Assist, which tracks vehicles in front of the vehicle in traffic, and identifies appropriate spaces in other lanes to move into safely to gain more ground in heavy congestion. It detects road markings to keep the Ceed in its lane on the motorway, and controls acceleration, braking and steering depending on the convoy of vehicles in front.

No car in this sector can afford to go to market with second-rate economy and emissions figures. So how does this one fare? The 1.0-litre T-GDi petrol engine delivers emissions rated at 122g/km. For the 1.4-litre T-Gdi power unit, emissions are rated at 127g/km when fitted with the seven-speed dual-clutch transmission. Manual models emit 132g/km. The big news with this third generation model is Kia's latest 'U3' diesel engine. Designed to go beyond the stricter limits laid down by the latest Euro 6d TEMP emissions standard, this 1.6-litre CRDi (Common-Rail Direct injection) unit uses Selective Catalytic Reduction active emissions control technology to significantly reduce emissions. Hence a reduction in particulate matter and Nox compared to earlier Kia diesel engines. And improved CO2 readings of course. With a six-speed manual transmission, the 114bhp version emits 99g/km of CO2. Models fitted with a dual-clutch transmission produce 105g/km. There's also a plug-in model, which mates a 139hp 1.6-litre perol engine with an 8.9kWh battery pack and a 44.5kW electric motor. It's capable of 37 miles of WLTP-rated all-electric driving range. As usual, there's also Kia's lengthy 7-year warranty as part of the deal.

Kia's Ceed Sportswagon is one of those sensible choices that you might just enjoy making. If you had your eye on the five-door hatch version but felt your growing family perhaps needed a little more room, it could be just about perfect. And even if you'd had no interest in Kia but came across one of these, you might just be tempted. For a start, most small estate cars are either deathly dull to look at, not especially spacious inside or inefficient to run. Or all three. This Kia is different. The styling's smart, the practicality's sufficient and the running costs are where they need to be. It feels of high quality inside too and is better equipped than comparable rivals. In summary, this model is yet further proof that not only has Kia closed the gap on many of its European rivals but has edged past many of them. If you're looking for a small estate car, it'd be wholly remiss to deny the Sportswagon a place on your short list. 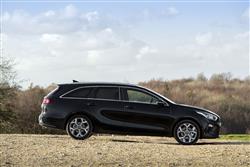 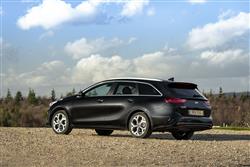 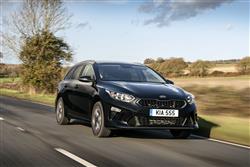 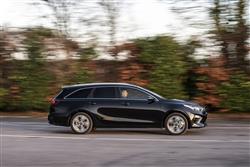 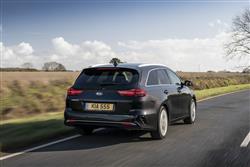 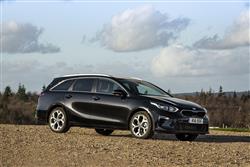