Kia's Picanto is at its most affordable - and potentially at its most appealing - in base 1.0-litre form. The experts at Car Driving look at what's on offer.

We know the Kia Picanto makes sense as a citycar, but this third generation model also adds a big dash of driving fun. That's an important factor when it comes to separating the best from the rest in this hotly contested sector. So, is the Kia among the class leaders? Let's check out the entry-level 1.0-litre version and try to find out.

Citycars are by their nature small. In the past, that's been an excuse for some car makers to ignore the driving experience and cabin quality in the pursuit of low prices. Kia thinks differently and with the third generation version of its urban orientated Picanto model, the Korean company has introduced a big dose of driving fun that aims to elevate this car firmly into contention in this keenly fought sector. Will that convince buyers to choose the Picanto over its Fiat 500-sized rivals? Given the sharp looks of this third incarnation of the Kia, it would be a brave man who bet against this Korean extending its market share. How will it do that? A drive in the base 1.0-litre version may help us find out.

City cars have to balance ease of driving around town with being able to drive on motorways with equal ability. That's no easy task, but it's one the latest Picanto manages as well as, or even better, than most of its rivals. One of the core reasons for this is the steering. It's an electrically assisted system that provides plenty of feel as you pilot the car through town or along country lanes. Just as vitally, it also imparts a great sense of stability on the motorway, so you're never left worrying about driving a city car outside of its natural habitat. nderpinning this is the way the Kia keeps the lumps and bumps of the average road at bay. Its suspension is supple and absorbs all but the very biggest potholes with grace, yet it keeps body lean in check as you corner. Add in good grip, well contained wind and road noise and you have a small car that feels very grown up. That impression is underlined by the engine range on offer in the Picanto. It starts with the 66hp 1.0-litre 'MPi' unit we're looking at here, this three-cylinder motor pulling eagerly from tick-over. There's the usual triple pot hum from under the bonnet that's pleasing to the ear, while 0-62mph in 13.8 seconds is on a par with the competition.

It may be the smallest car in its range, but Kia has packed in a lot of design thought and clever engineering to the Picanto. It's based on the firm's 'H platform' and has twice as much high strength steel than the previous generation. This makes it safer in the event of a crash and lighter to help save on fuel and emissions. Overall, it weighs 23 kilograms less than the last model, which is a lot for a citycar. Getting comfy in the Picanto is easy thanks to all but the base '1' model coming with a height adjustable driver's seat. The helm for all variants except the entry-point model features remote controls for the stereo, hands-free phone connection and the trip computer. You might be forgiven for thinking a city car isn't going to offer up much room on the back seat. Well, the Picanto shows you can fit a quart into a pint pot as two adults can sit in the rear quite comfortably. If they're taller, you may find knees rubbing against the front seat cushions, but elbows, shoulders and heads are accommodated easily. As for the boot, well the Picanto offers 255-litres of capacity, which puts it among the more spacious luggage carriers in this class.

To head off in a brand new Picanto from a Kia showroom will cost from around £9,500 for the 66hp 1.0-litre MPi in base level '1' trim. Prices for the 1.0-litre variant rise to around £12,000 for the sporty 'GT-Line' version. You wouldn't expect bargain basement '1' trim to include much more than the basics - which is pretty much what you get; things like daytime running lights, electric front windows, a trip computer, 60/40 split-folding rear seats and USB and Aux-in ports for the two-speaker audio system. With plusher '2' trim, Kia will also throw in air conditioning, Bluetooth and rear electric windows. As for safety, well Kia says that this is the safest A-segment car it has ever made, featuring double the proportion of Advanced High Strength Steel compared to the outgoing model and a selection of active safety technologies. The stronger, lighter body is supported by six standard airbags (front, front side and curtain airbags), and an optional knee airbag, as well as a range of active safety features. These include standard Vehicle Stability Management (VSM) with Electronic Stability Control (ESC) to ensure stability under braking and cornering. In addition, this Picanto is available with Autonomous Emergency Braking (AEB).

The entry point to the Picanto range is the 66hp powerplant we've been looking at here which delivers 64.2mpg on the combined cycle and 101g/km of CO2. What about other expenses you might incur? Well, regular maintenance is required every 10,000 miles or 12 months, depending on which comes round sooner. Or you could take out the 'Care-3' package that offers fixed prices on the first trio of dealer trips, and this can be extended to five check-ups with the 'Care-3 Plus' deal. You can also bundle in an MoT test with this, so you know your car is taken care of for the whole time your name is on the logbook. Couple the titchy fuel bills with free road tax and cheap insurance and you have a car that makes all kinds of sense for city drivers. It's exactly because it stacks up so well on the balance sheet that residual values look set to be very healthy. The much-trumpeted 7 year / 100,000 warranty helps in that regard since it's transferrable to future owners. However, it is worth pointing out that the 'bumper to bumper' complete car warranty is only five years, with the extra two years of cover being restricted to the engine and gearbox.

The Kia Picanto has been nipping at the heels of the class leaders ever since it was launched. Now, in third generation form, it's no longer chasing but firmly among the best in this tightly contested sector. Yes, even in this base 1.0-litre guise. It does this not so much by being radically different or brilliant in one area, but by doing everything well. It's well made, has plenty of safety kit and comes with a good amount of equipment in most versions. Simply put, the Picanto is the right car at the perfect time for Kia. It sums up what we love about citycars, from nimble driving to frugal running costs, all backed up by a generous warranty. It all makes this one of the very best models in this class we've seen in a long time. 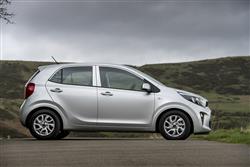 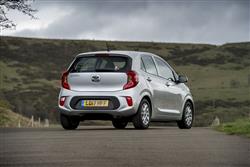 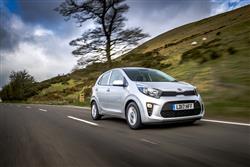 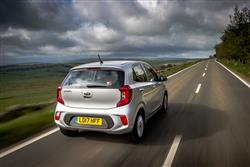 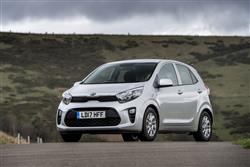 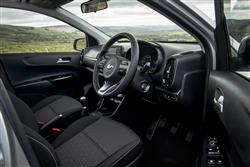