The Kia Stinger took the South Korean maker into premium brand executive territory for the very first time. Now, it's been updated. Jonathan Crouch drives it.

Yes, it's a Kia. Yes, you might want one. No, this 'Gran Turismo' model isn't merely a copy of something German. Welcome to the Kia Stinger, now usefully improved. The looks don't lie.

Back in 2017, we were offered a very different kind of Kia. The Stinger was a five-door performance GT that took on the German premium brands in the luxury sports Gran Turismo market. Since then, it's worked well as a rare but desirable halo model for the Korean brand and a respectable 10,000 global units have been sold. Enough to justify a facelift in 2021, which brought us the car we look at here, a model with some useful updates. You get a slightly smarter look, a few minor handling tweaks, much improved media connectivity and a big safety upgrade. It'll be an even rarer sight though because the range is now centred only on this priciest, most powerful V6 petrol-engined GT S variant.

With this revised Stinger model, the only variant still available is the GT S model we always most liked, fitted out with a growly potent twin-turbo 3.3-litre T-GDi petrol V6. Due to emissions updates, this unit's 361bhp output is a fraction less than before, but it still sounds great and the performance figures are little different, 62mph dispatched in just 4.7s on the way to 168mph if you're quick with the smooth 8-speed automatic transmission's steering wheel-mounted paddle-shifters. As before, this powertrain offers a lusty 510Nm of torque, starts pulling from just 1,500 revs and really gets into its sweet spot between 3,000 and 4,000rpm, clearing its throat with the aid of a mildly contrived audio system soundtrack that broadcasts responses to your right foot if you switch into one of the sporty driving modes. As is usual with set-ups of this kind, there are two dynamic settings on offer, 'Sport' and 'Sport +', though to use the second of these, you'll need to be feeling a little brave. That's because 'Sport+' restricts stability control assistance, which means it's quite easy to get the rear end squirming playfully about with a quick deliberate jab on the throttle. That reminds you of the Stinger's proper old-school rear wheel-driven configuration. The original Stinger was the first Kia ever propelled from the back axle - well it was for the UK anyway. Left hand drive markets always had the Stinger GT S with all-wheel drive, a format that continues to be unavailable here for reasons that Kia vaguely explains away by citing 'differences in packaging'. We've always felt though, that drive from the rear rather suits this Stinger's old-school feel, originally developed by a team led by ex-BMW M car engineer Albert Biermann. Thankfully, not much has changed with that apart from a slight re-tuning of the adaptive dampers, a subtle revision to the surprisingly responsive power steering and a switch from Continental Sport Contact 5 tyres to Michelin Pilot Sport 4S rubber. To compensate for the lack of AWD, the brand continues to standardise a limited slip differential across the range for our market and this, in concert with a torque vectoring system that lightly brakes the inside front wheel at speed through fast corners, means that the Stinger remains impressively adept at overcoming its rather portly 1.890kg body weight and hurling itself from bend to bend, should you be inclined to drive it in such a fashion. Ultimately, this is a GT rather than a super sports saloon - a poor man's BMW M5 if you like. The Stinger is that good: was - and still is. It's still almost everything you wouldn't expect a Kia to be.

As before, this model is a 'Gran Turismo'-style five-door sports hatch aimed at the quickest versions of slinky premium-badged models like Audi's A5 Sportback and BMW's 4 Series Gran Coupe. Not much has changed at the front where, as before, the bonnet sports fake vents and the Stinger's 'Tiger Nose' grille sits between LED headlights. From the side, you'll notice the restyled 19-inch alloy wheels with their Brembo brake callipers. And, at the rear, redesigned combination LED tail lamps stretch across the full width of the car, with a more distinctive light signature mimicking the shape of the subtle spoiler integrated into the boot lid. It certainly feels very opulent inside, where a proper level of screen tech has finally arrived for Stinger folk. If you happen to be familiar with the restricted 8-inch centre monitor of the original model, you'll welcome this much more impressive 10.25-inch centre stack infotainment screen, which resides just above these three rather unique jet engine-style centre vents. The chrome-bezeled instrument cluster remains defiantly analogue, but the two gauges are separated by a clear 7-inch screen that delivers most of what you need to know. And you view it all through a chunky flat-bottomed leather-stitched three-spoke wheel. This being a facelift, there are no changes to cabin architecture, but the dash and doors gain smarter contrast stitching, the centre console is finished in aluminium, there's a metallic finish to sections of the steering wheel, a frameless rear view mirror has been added and you now get a 64-colour mood lighting system. It's not especially easy to get in the low-slung back seat but once you do, rear seat space is acceptable by class standards, with adequate legroom for even taller adults. Out back, the powered tailgate is of the sort you can access with a wave of your foot below the bumper. And once it's raised, there's a 406-litre boot. If you flatten the 60:40-split rear bench, you'll free up a modest 1,114-litres of total capacity.

Because the previous entry-level 2.0-litre petrol and 2.2-litre diesel variants have been discontinued, this Stinger now sits quite a lot further up-market, though the asking price of around £42,600 for the single GT S V6 petrol model now offered isn't a lot different from what it was before. If you consider that a comparably-performing Audi S5 Sportback costs around £50,000, that'll put things in perspective. You get quite a lot of kit for the money as well, including Nappa leather upholstery in 'Saturn Black' or optional red. Plus a now-bigger 10.25-inch centre stack split-screen infotainment display with Bluetooth multi-connection that enables users to connect up to two mobile devices at the same time - maybe one for hands-free phone use and one for multimedia. This infotainment set-up offers 'Apple CarPlay' and 'Android Auto' smartphone-mirroring and a voice control system that can enable you to alter things like climate, audio and navigation settings. As an option, a suede package is also available for the first time, with the cabin trimmed in Saturn Black suede with contrasting red stitching and red seatbelts. New camera safety features now feature as standard, including a Blind Spot View Monitor, Lane Following Assist, Highway Driving Assist, Rear Occupants Alert and Safe Exit Warning. Already, the Stinger featured Autonomous Emergency Braking, Lane Keep Assist, Driver Attention Warning, Speed Limit Information and Rear Cross Traffic Alert.

The efficiency figures recorded here aren't bad but they still illustrate that this South Korean brand has a little way to match its German competitors in this regard. Let's get to the WLTP figures. For the 3.3-litre T-GDi GT S model, the only one now on offer, you're looking at 28.0mpg and 229g/km. As with all Kias, the Stinger is covered by a seven-year, 100,000-mile warranty that's longer than any other car in the same class. If the car is sold through a Kia Used Approved Dealership when less than 18 months old or with less than 18,000 miles on the clock, the warranty will be topped up to match that of a new model. Servicing should be affordable and the various pre-paid servicing packages you can buy will further help manage costs in this regard, with 'Care-3' or 'Care-3 Plus' packages offering retail customers fixed-cost, inflation-proof servicing for either three or five years. Insurance is group 42D.

Think of everything you expect a Kia to be. Bet you're not thinking of anything like this. But then that's just the point. The Stinger was designed to get you thinking differently. It's arguably more stylish than rival Audi A5 Sportback, BMW 4 Series Gran Coupe and Volkswagen Arteon models. It's certainly much better value, will be better equipped and will probably offer you a lot more performance for your money. True, efficiency figures aren't quite up to Teutonic standards. And the boot is a little smaller than rival trunks. But otherwise, this design is impressively hard to fault. With this revised model, we're disappointed that lower-order variants have been deleted from the range. And that you still can't have 4WD in this top V6 GT S variant that remains. But otherwise, we continue to like the Stinger very much and its upgraded cabin and much improved ADAS drive assist technology certainly now feel more appropriate to its exalted price point. This is the South Korean maker laying claim to be a world-class car manufacturer. And with a Stinger in your driveway, that claim would seem to be very credible indeed. 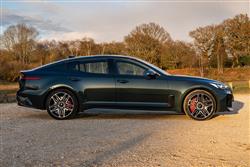 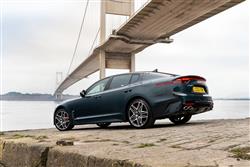 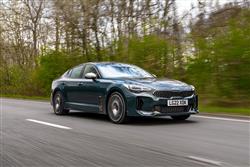 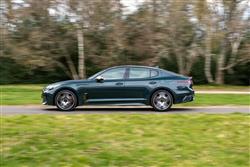 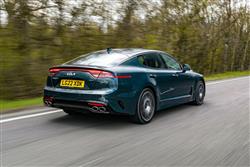 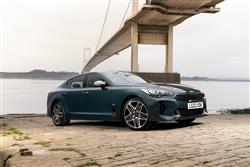