Available at Mercedes-Benz branches
From £22,998
£329 deposit
£329 per month
Finance your car with PCP
Enquire now

The fourth generation Mercedes C-Class has moved upmarket but this C200 petrol model isn't going to break the bank with its running costs. Jonathan Crouch reports.

In C200 petrol form, the most affordable Mercedes C-Class is a laid-back option that's a significant improvement on its pre-facelifted predecessor thanks to the latest application of Mercedes' EQ Boost mild hybrid technology. This enable's this variant's 1.5-litre engine to deliver the performance of the previous 2.0-litre unit - and of course do so with a much higher degree of efficiency.

One of the most liberating things you can ever do as a new car buyer doesn't cost a penny. It'll save you thousands of pounds in the long run, it might well save your driving licence and it will definitely remind you that you're confident in your own skin. It's virtually the opposite advice to every bit of car manufacturer marketing, but if you want to transform the way you look at cars, just consider this one simple truth. You don't need the really fast one. Accept this fact and you'll realise that you'll get from A to B in much the same time but you won't have to consume massive amounts of fuel, you'll pay half price or less for your car, you won't need to keep it in monster tyres and your insurance bills will be so small you'll feel like bunging your broker a tip. What's more, you might even end up in a car as good as this Mercedes-Benz C200.

With 181hp under the bonnet, the C200 gets to 62mph in 7.9 seconds, which is fast, but not quick enough not to be a liability. The optional 4MATIC version's a fraction slower. When accelerating, 'EQ Boost' system can assist the engine with an additional 14hp, bridging the brief moment until the turbocharger has built up its full charge pressure. If you really think that this variant might not be fast enough, then if you have to have petrol power, your options are limited. That's because the next step up in the C-Class hierarchy is the 367hp Mercedes-AMG C 43 six cylinder model - which costs up to £18,000 more. The C-Class has for some time been, and will continue to be, a car with a clear focus on comfort and refinement - at least in its mainstream guises anyway. It was the first model in this class to offer the option of air suspension, though most buyers stick with the standard steel springs. As before, across the range there's a standard 'DYNAMIC SELECT' driving modes system - and you can add to that with optional 'DYNAMIC BODY CONTROL' adaptive damping. All models come as standard with 9G-Tronic automatic transmission, which now features nine speeds.

Looking at the exterior of this C-Class, you'd be forgiven for thinking that this was the most conservative of styling directions. Any notionally car-literate person would be able to tell you it was a Mercedes C-Class, even if they'd never clapped eyes on the thing before. It's tidily executed, with hints of the latest S-Class in its detailing. You'd have to know the C-Class quite well - or be a Mercedes sales person - to immediately notice the exterior aesthetic changes made to this revised model. The design of the front and rear lights is defined by clear-lined contours. On both the saloon and the estate, the bumpers have been re-styled both front and rear and the sportier 'AMG Line'-trimmed models get a sleeker front apron and rear diffuser. Large wheels emphasise the rear and communicate a stylishly sporty character, while 'intelligent' Multi-Beam LED headlamps that adapt to toad conditions are now optional. Inside, the alterations are more obvious, with the introduction - as an option - of the fully digital instrument display already familiar from the brand's E-Class and S-Class models, complete with touch-sensitive steering wheel buttons. This is complemented by now-larger centre console screens that can be either 7-inches or 10.25-inches in size, the latter format used for the top 'COMMAND' multi-media set-up that many customers will want. Otherwise, it's much as before, with a broad centre console swooping between the front occupants. In the back, rear seats space isn't especially generous but there's a very class-competitive 480-litres of boot space too. With the estate, the figure's 490-litres.

C200 prices start at around £29,000 with base 'SE' trim; around £1,300 more gets you plusher 'SE Executive' spec and if you can afford a touch more, there are further 'Sport' and 'AMG Line' specs to consider. Overall, you're looking at a saving of around £1,700 over the equivalent 136hp C200d diesel. As usual, there's also an estate variant. Either way, if you go for top 'AMG Line' trim, there's the option of '4MATIC' 4WD for just under £2,000 more. Mercedes also offers the C-Class in Coupe and Cabriolet guises, but it's the four-door and station wagon derivatives that are our focus here. As for equipment, well that's more generous than it used to be. Media connectivity will be important to likely customers, so every C-Class comes as standard with an 'Audio 20' multimedia system featuring two USB ports, an SD card reader, Bluetooth connection and media interface. Many though will want to upgrade to the 10.25-inch 'COMAND Online' centre-dash screen that boasts fast 3D hard-disc navigation and access to a Concierge service that'll connect you through to help with every aspect of your journey. This can connect into a 12.3-inch digital cockpit display. Plus there are now two optional audio upgrade choices - a 9-speaker 225-watt set-up and the top Burmester surround sound system. Safety-wise, 'Active Brake Assist' autonomous braking is standard. And there's an optional 'Driving Assistance' package that delivers the 'Active Distance Assist DISTRONIC' system enabling 'level 2' autonomous driving capability.

The big draw of this C200 is its clever 1.5-litre EQ Boost petrol engine. It features a clever starter/alternator that during deceleration recuperates kinetic energy and charges the battery. For auto models, there's also a gliding mode that operates at cruising speeds, switching the engine off, before seamlessly re-starting it when you brush your foot against the throttle. And a 'recuperative brake with intelligent engine stop' function which also works when the vehicle is coasting. Mercedes says that internal friction is much reduced with this new four cylinder unit. It manages 53.3mpg on the combined cycle in a 2WD saloon model on standard wheels, while emitting 123g/km of CO2 - or 50.4mpg and 126g/km if you go for the 9G-TRONIC PLUS 9-speed automatic. Go for top 'AMG Line' trim and larger wheels mean these CO2 figures rise to 132 and 131g/km respectively. Obviously, the readings will be affected slightly by the addition of 4MATIC 4WD. What else might potential C-Class buyers need to know? Well maintenance costs will be kept down thanks to an ASSYST Plus service indicator on the dash that'll calculates precisely when a dealer visit might be needed. And residual values will be as high if not higher than anything else in the class.

Bottom line? Don't automatically opt for a diesel this time round if you've decided on a C-Class. This C200 is cheaper, faster and, in real world term, won't necessarily cost you that much more to run, once you've taken everything into account. It's also a perfect choice for those who want to cover big miles in relative comfort. Specify it on the smallest wheels possible for the best quality ride and just dial back the stress. Potential Audi customers will like the high technology - the intelligent headlamps, the autonomous driving kit and so on. Wavering BMW buyers may be tempted by the sophisticated EQ petrol engine technology. And both groups will appreciate the class-leadingly luxurious cabin and the impressively high likely residual values. Overall, it's a strong contender. 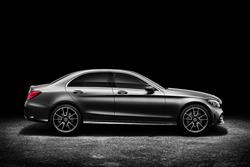