Toyota couldn't afford for their third generation Yaris to be an also-ran in the fast-moving supermini segment. So in 2017, they fundamentally revised it with smarter looks, extra safety equipment and a fresh 1.5-litre petrol engine option. A younger audience was being sought for this car in order to broaden this model's appeal. But does it make sense as a used buy? Let's see.

Today, a supermini must be more than sensible, practical, well-built and efficient. Buyers now take those sorts of things for granted and look instead for fashion, flair, innovation and technology. Back in 2017, Toyota hoped they'd be seeking something like this, the much improved version of their third generation Yaris. The original version of this MK3 Yaris model, launched back in 2011, was a decent car and quickly distinguished itself in offering the only full-Hybrid powertrain available in the supermini segment. Not every buyer in this class wants or can afford petrol/electric power though, and there simply weren't enough reasons to buy other more conventional Yaris variants when rivals offered more striking looks, more engaging design and a more dynamic driving experience. A far-reaching update in 2014 improved things though and subsequent sales gradually rose - enough in fact by 2016 to take total Yaris production beyond three million units and see the MK3 line account for 6.5% of the European supermini sector. By 2017 though, that market share was coming under considerable pressure, with the arrival of all-new versions of key segment contenders like Ford's Fiesta, SEAT's Ibiza, Nissan's Micra, Kia's Rio and Citroen's C3. Ideally, a completely new fourth generation Yaris design would have effectively countered this threat, but with that still a few years away, Toyota contented itself with the £76 million further re-development of the third generation model that we're going to look at in detail here. It was an update package designed in Europe for European buyers and one that for the first time, was also adopted by the Japanese-made 'Vitz'-badged version of this car that sold across the rest of the world. So, it was a big deal, which is something you quickly discover once you start to drill down into the detail. Over 900 new parts were added to this enhanced MK3 model to improve its design, dynamic performance and safety and, perhaps most significantly, there was a completely new mainstream petrol engine, a 1.5-litre powerplant that at last replaced the previous aging old 1.33-litre unit. For the first time, there was also a high performance race-inspired hot hatch variant, the Yaris GRMN model, which offered a supercharged 1.8-litre engine producing 205bhp. As before, the line-up's major draw continued to be the hybrid powered version that almost half of all Yaris customers in our market wanted - the opposition from this period still had nothing to counter that. As part of the updates, this variant was made even quieter and smoother to drive. In terms of the total range proposition, what it all adds up to, we were told, was supermini fashion at its most friendly, chic city motoring at its most sensible. This fresher take on Yaris motoring lasted until later in 2020, when an all-new fourth generation Yaris model was launched.

Though it's a long time since the Yaris has been seen as in any way youthful and extrovert, creating that kind of feel was the objective here. Hip without being hip replacement? Perhaps that's a little cruel, but you get the idea. To create the required effect, the French team tasked with this re-style re-designed both the front and the rear of the car with a greater emphasis on horizontal lines supposed to express a wider stance and a lower centre of gravity. The result was what Toyota described as a more 'dynamic and emotional shape' intended to deliver what the brand hoped was something of a three-dimensional look. At the wheel, it was all a lot plusher and more interesting than was the case with earlier versions of this MK3 model. The cheap glossy look that characterised previous versions of this third generation design was here replaced by classy grained textures and there were also smarter, more interesting colour co-ordinated seat trims. The thicker three-spoke wheel was also new and came complete with the buttons owners would need to operate the 4.2-inch colour TFT multi-information 'combimeter' display that was added between the two main dials in the instrument binnacle. This was a standard feature providing customers avoided entry-level trim - as was the 'Toyota Touch 2' infotainment system that, as before, dominated the centre of the dash. It works via a large, high-resolution 7-inch colour touchscreen that can be operated with the kind of 'drag-and-flick' actions you'll be familiar with from your phone. And in the back? Well you can't comfortably carry three adults in the rear for any real distance, but that's an unreasonable expectation in a car of this size. What's more important is that with knee room improved by thinner seatbacks, a couple of six footers are pretty well catered for. They'll also enjoy more head space than would normally be the case in a car from this class, that being thanks to 1,510mm of exterior body height, enough to make this one of the tallest superminis you can buy. The headroom on offer is particularly impressive given the way that the rear seats are positioned a little higher than those in the front. As for rear luggage space, there's a 286-litre boot, extendable to 768-litres if you push forward the rear bench.

As usual with a supermini, check for this like interior child damage and scratched alloy wheels. With our ownership survey, we found plenty of satisfied Yaris owners, but inevitably, there were a few issues. A rattling dash was reported by one owner. We also came across issues with creaking suspension and a clunking gearbox, while in one case, the centre console went blank occasionally. And it's been reported that the 1.0-litre petrol engine occasionally suffers problems pulling from, low revs. Look out for all these things on the test drive and, as usual, prioritise models featuring a fully stamped-up service record.

This third generation Yaris model always sold well in its petrol/electric Hybrid guise. Where the range was always lacking though, was in the provision of an affordable, efficient conventionally-engined variant able to provide a bit of extra performance and undertake the kind of longer trips the Hybrid version feels less comfortable in attempting. The four cylinder 1.5-litre petrol unit introduced as part of this MK3 model's post-'17-era changes attempted to plug that gap and, sure enough, feels usefully more responsive than the old 1.33-litre powerplant it replaced. It was also decently efficient, managing 58.9mpg on the combined cycle and 109g/km of CO2, NEDC figures that original buyers could improve further by paying extra for the optional Multidrive S CVT auto gearbox. We think this powerplant is a much better bet that the line-up's entry-level engine, a rather feeble and only slightly more affordable 69bhp 1.0-litre three cylinder unit. As we said though, a very large proportion of Yaris buyers choose the Hybrid powertrain which in this improved post-'17-era model, as before, featured Toyota's familiar Hybrid Synergy Drive system serviced by a 73bhp 1.5-litre petrol/electric powerplant and a bespoke-engineered CVT auto gearbox. This combination works well around town, able to leave the car operating in electric-only mode for significant periods. Hence the possibility of achieving impressive NEDC figures - up to 85.6mpg on the combined cycle and 75g/km of CO2. This variant struggles a little more when you put your foot down on the open road, but as part of the update changes, great efforts were made to improve ride and refinement, making this an even more agreeable short-journeying companion. At the other extreme sits the frantic 205bhp 1.8-litre supercharged GRMN hot hatch model, a variant with very different priorities in mind. If you're a typical Yaris buyer, you'll probably struggle to see the point of it.

This improved post-2017 third generation Yaris isn't the contender you'll want in this segment if ultimately, your priority lies with a dynamic drive. To be frank though, we can't imagine too many potential buyers being especially bothered by that. These people prioritise endearing looks over engaging handling and want a trusted brand that'll deliver them low running costs, a comfortable ownership experience and plenty of useful technology. All of which is on offer here, especially in the Hybrid variant that still remains a unique choice amongst used superminis from this period in this segment. So, how to sum up? Well, there are doubtless more engaging chapters in the Yaris story still to be written, but what's important is that the updates introduced here put this third generation version back on track. Toyota, it seems, knows how to right a best seller. 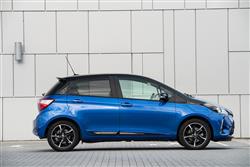 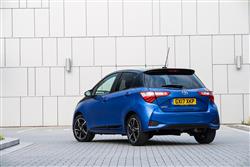 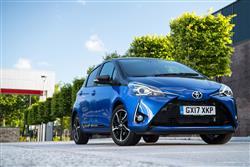 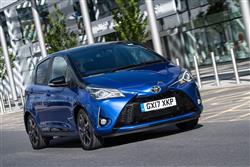 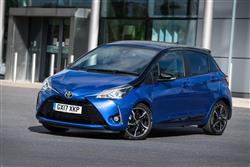 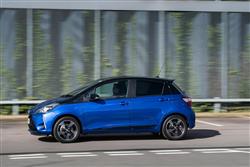