Vauxhall's family SUV, the Grandland X, will be most popular in 1.2-litre petrol turbo guise. Jonathan Crouch tries it.

Vauxhall needed competitive representation in the growing SUV C-segment and this Grandland X provides it. The drive dynamics of this 1.2-litre petrol turbo version aren't particularly involving but it's one of the most spacious and efficient contenders in the Qashqai class and sets itself apart from rivals with a clever OnStar media connectivity and concierge system. This car won't be a magazine favourite but the truth is that a lot of boxes are ticked here.

Yes, it's another family-friendly SUV and yes, this time, it's a Vauxhall, this Grandland X the largest model of this kind in the Griffin brand's newly rejuvenated crossover range. It shares all its engineering with its group cousin and close rival, Peugeot's 3008 and since that model was crowned the 'European Car of the Year' at its introduction, the prospects here seem encouraging. Products like this will be key for a manufacturer that's gradually having to re-invent itself. Of course, to realise its production objectives, this car must attract conquest sales from other more established brands in this sector, so it needs something to help it stand out. Hence the standard fitment across the range of Vauxhall's clever and still rather unique 'OnStar' personal connectivity and service assistant set-up. Add to this to the more familiar attributes of models in this segment also offered here - things like visual personalisation, efficient engines and, in this case, a neat 'IntelliGrip' system to enhance traction on slippery surfaces - and the Grandland X proposition seems, as we've suggested, to be potentially promising. Let's try this car in its volume 1.2-litre petrol turbo form.

We'd anticipate that your expectations of a car of this kind when it comes to drive dynamics will probably be pretty modest. You'll want quite a commanding driving position, a comfortable ride, reasonable refinement, decently responsive engines and, well, that's likely to be about it. If you're after a C-segment SUV that you can throw around a bit, then this one certainly won't suit. Take a more typically relaxed approach though and everything becomes much more satisfactory. It soaks up bumps and tarmac tears that would trouble many rivals. Plus it's relatively quiet and easy to manoeuvre, particularly around town where the light steering that hampers you at speed becomes a boon. That slightly raised driving position is delivered - but not to the point where acclimatisation would be required if you were moving into a model like this from something more conventional. Under the skin, this Vauxhall shares almost everything with its two PSA Group cousins, Peugeot's 3008 and Citroen's C5 Aircross. That includes its 'EMP2' platform and a range of engines that see mainstream buyers choosing between the 130bhp 1.2-litre three cylinder turbo petrol unit we're trying here or a frugal 120bhp 1.6-litre four cylinder diesel. This petrol powerplant makes 62mph from rest in 11.1s en route to 117mph and both engines come with the option of a 6-speed automatic if you don't like the not especially sweet-shifting 6-speed manual gearbox provided as standard. There's no 4WD option, but you can pay extra for an 'IntelliGrip' system that'll give you a choice of modes that'll improve front wheel traction on slippery surfaces.

It's a compliment to Vauxhall that from an aesthetic point of view, this Grandland X very much has its own identity. You certainly wouldn't initially know this car to be as closely related to its Peugeot 3008 donor design as it actually is, British styling chief Mark Adams and his team having worked hard at developing the elegant, carefully crafted SUV brand character already established in the company's smaller Crossland X and Mokka X models. We approve of the fact that this is one of the larger contenders in the SUV C-segment too, so unlike some rivals, it can offer versatile practicality that's a genuine improvement over that of the family hatchback it's based upon. And inside? Well if you were to switch to a Grandland X from, say, a comparably-priced upper-spec Astra family hatch, there'd be hardly any acclimatisation required, though you would probably note the slightly raised driving position that Crossover buyers like so much. The centrepiece of the smartly styled dash is the beautifully-integrated Intellilink infotainment screen which incorporates the usual DAB stereo, Bluetooth 'phone and informational functions. Include the optional satellite navigation system and the screen size increases from 7 to 8-inches and you'll be better set up to use this car's other key technical innovation, the OnStar 'personal connectivity and service assistant'. This includes a vehicle tracking system in case of theft, creates in your Grandland X an in-car wi-fi hotspot and will allow you to monitor key vehicle information via a downloadable 'MyVauxhall' smartphone app. As for practicalities, rear seat room is reasonable and there's a spacious 514-litre boot.

Grandland X pricing sits primarily in the £23,000 to £30,000 bracket, with this 1.2-litre 130bhp petrol fitted to more affordable model. Automatic transmission is a £1,500 option. Standard is the 'OnStar' personal connectivity and service assistant system but that's just part of a very complete specification that comes with most versions of this Vauxhall. As is often the case with the brand, there's a confusing trim structure hierarchy that sees the base trim option - 'SE' - being priced fractionally above the much better-equipped next level up - 'Tech Line Nav'. Which means that unless you get offered a really good deal on an 'SE'-spec Grandland X (which is very possible), 'Tech Line Nav' is the trim option to choose at the foot of the range. Top spec 'Elite' trim gets you leather upholstery. All models get alloy wheels of at least 17-inches in size, front foglamps, LED daytime running lamps', powered heated mirrors, rear parking sensors and auto headlamps and wipers. Inside, across the line-up, expect to find features like dual zone climate control, a leather-covered multi-function steering wheel, a trip computer, an anti-dazzle rear view mirror, a useful 230V power outlet behind the front seats and cruise control with a speed limiter. Plus there's an 'Intellilink' infotainment set-up incorporating a DAB tuner, Bluetooth audio streaming and a 'Smartphone projection' package allowing you to access music and apps from your handheld device via 'Apple CarPlay' or 'Android Auto' systems.

Let's cut straight to it: Vauxhall has never sold any sort of mid-sized SUV able to offer an across-the-board class-competitive set of running costs. Look at the models of this sort that the company's produced in the modern era; the Frontera, the Antara and, latterly, the Mokka. All have lagged way behind the segment standard when it came to fuel and CO2 returns, at least in terms of petrol power anyway. The green pump issue is significant because unless you can afford around £24,000 or more for a Grandland X with a diesel engine, you'll have to have one with petrol power. The unit in question is the PSA Group 130bhp 1.2-litre three cylinder turbo we've been testing here, a powerplant that's actually one of the standard-setters when it comes to engines of this kind in this segment. Sounds promising: let's get to the figures. This petrol-fuelled Grandland X 1.2 Turbo variant, the one most customers will buy, delivers 55.4mpg on the combined cycle and 117g/km of CO2 in manual form with 17 or 18-inch wheels, returns that are, as promised, genuinely difficult to beat in this sector. Something directly comparable like a rival Ford Kuga 1.5T looks almost recklessly extravagant by comparison, delivering 45.6mpg and 143g/km. Go for the automatic gearbox option with this Grandland X model and the figures are very little affected, falling only to 54.3mpg and 120g/km.

And in summary? Well this isn't any kind of class leader, but it's a product that's been carefully thought through, bringing together virtually all the things that family buyers prioritise in this segment in a well-judged and relatively affordable package. We also think the development team have done well to give this product a look and feel that's so distinct from that of its French cousins. Going forward, achieving that level of distinction will be vital if there's to be a compelling case for the long term survival of the Vauxhall brand. So yes, this is a useful first step towards a very different kind of future for the Griffin maker. It'll be interesting to see what happens next. 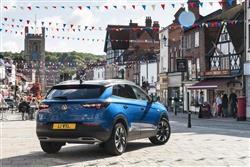 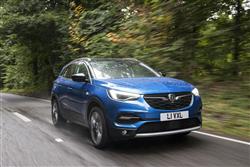 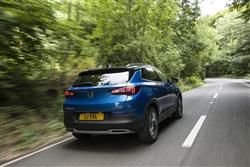 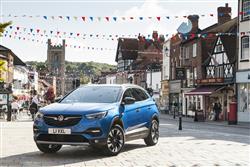 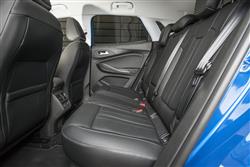 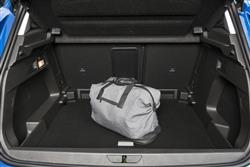