The Volkswagen Transporter has sharpened up its act in updated 6.1 model form. Jonathan Crouch takes a look.

Volkswagen's Transporter looks stronger than ever in this updated 6.1 form, thanks to a careful package of changes that include more efficient 2.0-litre TDI diesel engines, a load-through hatch and greater levels of safety and media technology, plus there's also a smarter look. As before, the interior remains one of the most polished in the medium-sized panel van class and the wide range of body options should keep most operators happy.

The Transporter story dates right back to Germany's bleak post-war era and 1949 when a Dutch vehicle importer called Ben Pon spotted workers at Volkswagen's Wolfsburg factory using a stripped-down Beetle to move parts around. Inspired, he sketched out a platform for a versatile commercial vehicle that would go on to set a template for the kind of spacious modern van we're familiar with today. That T1 Transporter sold for 17 years before a more spacious T2 model was introduced in 1967, followed by a more angular T3 version in 1979. More familiar on modern roads is the T4 design of 1990 and its replacement T5 successor of 2003. A T6 model was launched in 2015, updated to create this '6.1'-series model in late-2019. All of which should explain why the Volkswagen Transporter is pretty well established in the LCV sector, the van segment's fourth best seller overall and the second best seller in the medium sized sector, behind the Ford Transit Custom. Lots of rivals are snapping at its heels, hence the importance of this '6.1' package of updates.

As usual with a Transporter, all the engines on offer are 2.0-litre four-cylinder TDI diesels, mated to either 5 or 6-speed manual gearboxes or (further up the range) DSG auto transmission. Things kick off with a base 90PS unit (upgraded from the previous 84PS output) and a 110PS powerplant (previously 102PS), these two options making up the bulk of the sales. The mid-range 150PS unit, like those two base variants, gets the latest Euro6d-Temp efficiency modifications and if that's not powerful enough, there's also a top twin turbo 199PS unit. With the two highest outputs, there's the option of 7-speed DSG auto transmission and 4MOTION 4WD, the latter in place of the standard front-wheel-drive set-up. There's also now an all-electric version, the ABT eTransporter 6.1 which has a 110PS power output, a 0-62mph time of 17.4s and a driving range of 82 miles. Perhaps the key change in the standard range is the switch to electromechanical steering (like the rack used in the brand's larger Crafter LCV), which makes possible new safety systems like Crosswind assist and Lane-keeping Assist. Passenger Multivan versions gain a redesigned front suspension system as part of the '6.1' update package. Road noise is still a little intrusive at higher speeds. But we continue to like this Transporter model's smooth ride, which avoids the kind of over-soft bounciness that afflicts many similar vans, especially over typically broken urban surfaces.

This improved Transporter 6.1 model looks a sharper proposition, but not by much. There's a new front grille and bumper - actually, everything below the bonnet line has been restyled, plus the headlamps are narrower and now more seamlessly merge with the grille crossbar. And at the wheel? Well you'll look in vain for soft-touch surfaces, but then you wouldn't expect that kind of thing on a van. Despite this, the Transporter continues to offer the smartest-feeling interior in the segment, courtesy of a completely redesigned cabin that aims to deliver in terms of both style and functionality. The '6.1' model update changes are subtle. There's a choice of two centre-dash infotainment screens, measuring either 6.5 or 8.0 inches, and there's 'Apple CarPlay'/'Android Auto' smartphone-mirroring. As options, you can now specify a wireless 'phone charger and a fully digital instrument cluster. Cabin storage is a little better than before, with a reshaped area on top of the dash, plus the door trims have been reshaped to allow for greater stowage space. On top of the dash, there are cupholders to the far left and the far right, though they're rather shallower than we would like. In between lie a whole variety of different storage areas, though it's a little annoying that few of them are deep enough to stop small items flying out during really spirited motoring.

Excluding VAT, Transporter pricing started from just under £23,000 and for panel vans stretches up to around £38,000, with all variants based around some sort of 2.0 TDI engine. The core range is based around 'Startline' and 'Highline' trim levels, with a choice of short or long wheelbase body shapes. With 'Startline' trim, there's a base short wheelbase 'T26' variant with the 90PS powerplant, but otherwise, at each trim level you get the two body lengths spread between 'T28', 'T30' and 'T32' models, with the core 90, 110 and 150PS engine options. The 'T30' and 'T32' variants with 'Highline' trim can also be ordered with the twin turbo 199PS diesel unit. As usual there's also a Kombi crew van body style with a second row of seats and much the same range of variants on offer. Many Transporter buyers will want to find just over £1,000 (ex Vat) more for the extra cost 'Business Pack', which gives you Climatic air conditioning, rear parking sensors and an anti-theft alarm with interior monitoring. As for standard equipment, well even base 'Startline'-spec gets you a 6.5-inch centre-dash infotainment touchscreen with Volkswagen's 'AppConnect' system. This infotainment package includes two USB ports, smartphone pairing and integration capability for the company's 'We Connect' and 'We Connect Plus' connectivity features, plus the emergency eCall function. Some will want to upgrade to the brand's 'Discover Media' 8-inch screen with navigation. As for safety kit, well Crosswind assist is standard, Active Lane Assist is optional and 'Highline' spec includes Adaptive cruise control.

The key practicality change with this '6.1' model is the addition of a load-through bulkhead hatch, allowing you to push longer items like ladders through into the cabin. This allows operators to take items of up to 400mm greater length without having to put them on the roof or have them poking out the rear doors. Cargo bay length is 2572mm in a short wheelbase variant (a little longer than a Transit Custom) or 2975mm in a long wheelbase model (a little shorter than that Ford can offer). Interior roof heights measure in at 1410mm for the standard roof shape, 1626mm of height for the medium roof models and 1940mm of height for the high roof versions. Load volumes range from 5.8m3 to 9.3m3. The maximum useable width across the load area is 1175mm, while the width between the rear wheel arches is 1244mm. The payload capacity ranges from 685kg to a maximum of 1217kg. Running costs are of course very competitive. A typical 2.0 TDI 150PS T32 DSG model returns 34.4mpg (combined WLTP) and 158g/km of CO2 (NEDC). The ABT eTransporter 6.1 full-electric version can be charged via a 7.2kW wallbox in five and a half hours. Across the range, there's the usual three year/100,000 mile warranty.

As every business knows, the cheapest option isn't always the most cost-effective one. In the medium-sized Mercedes Vito and Vivaro-class van sector, this Transporter is a perfect example of that. There are certainly cheaper alternatives, but few of them can match this Volkswagen's build quality or its residual values. The changes made to this updated 6.1 model are useful - primarily the helpful load-through hatch and the upgraded safety tech. But as usual with a Tansporter, what you'll most remember after spending time with one is its quality feel. Overall, it says a lot that often on the move, you forget you're in a van at all. But then, this is a Transporter, part of the most enduring model line the commercial vehicle industry has ever seen and a vehicle with a greater history of development than any other in its segment. More efficient engines and extra technology have built upon that legacy, cementing this VW model's proposition in its sector and underlining this product's importance for potential business customers. It all means that, like the vehicle itself, this Volkswagen's market proposition remains as solid as ever. 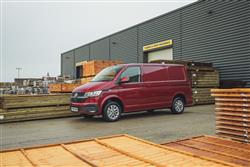 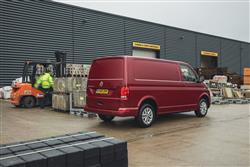 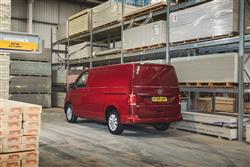 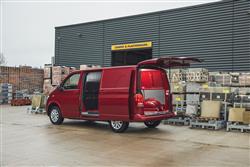 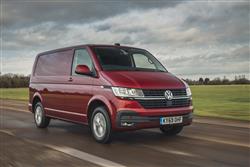 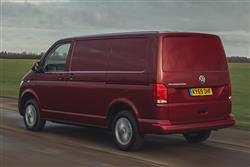