Volvo's MK3 model S60 saloon has the market's most elite mid-sized executive saloon models in its sights. If you're thinking of something 3 Series-sized, Jonathan Crouch thinks you should also consider an S60 too.

Sportier and more stylish, this more dynamic third generation S60 mid-sized sports saloon addresses the areas where previous Volvo executive cars have ultimately failed to deliver. It's engineered to be a far better driver's car than its predecessor and both quality and cabin design have taken a huge step forward. Plus it's the safest contender in its class. If you're looking for a change from your usual A4, 3 Series or C-Class, this S60's worth a look.

Does life really begin at sixty? If you're a potential Volvo owner, the answer may well be yes. The Swedish maker's third generation S60 saloon is, we're told, the most dynamic Volvo ever, both to look at and to drive, something of a departure for a brand that has built its reputation on substance and safety rather than style and sportiness. But then something pretty radical was needed to break the German stranglehold on the BMW 3 Series-dominated mid-sized executive market where this car must compete. This MK3 S60 has provided it. If in buying a Volvo, you expect all the design flair of a chartered accountancy firm, then this car will come as quite a shock, with sharp styling that sets it apart, both inside and out. The promise is that this will be matched with a greater emphasis on driver involvement than any model the company has produced in its history - a much harder thing to deliver. Particularly if, as we're promised, all this has been achieved without sacrificing the substance and safety part of the brand value proposition. Does it all add up? Let's see.

Volvos have tended to feel like the safe cars they are when you get them out on the road but with this MK3 S60, more emphasis than ever before has been placed on instilling some excitement. This third generation S60 design is the first Volvo car to be sold without a diesel offer, signalling the company's commitment to electrification and a long-term future beyond the traditional combustion engine. That's some way off yet though and for the time being, most S60 sales will be centred around the brand's usual conventional T5 petrol powerplant, which has a power output of 250hp channelled through 8-speed auto transmission. The T5 manages 62mph from rest in 6.5s en route to a maximum of 145mph. The alternative is to opt for the brand's Twin Engine plug-in technology. There are two top AWD variants of this car that use that. The standard T8 uses a 303hp version of the 2.0-litre engine and offers a WLTP-rated all-electric driving potential of up to 36 miles when fully charged. The ultimate S60 though, is the top 'Polestar Engineered' T8 flagship derivative, which tweaks that petrol powerplant out to 318hp and includes a set of adaptable Ohlins DFD dampers. Handling's improved courtesy of 5% stiffer springs and 245-section Pirelli P Zero tyres. Whichever of the T8 models you choose, you'll find the engine's total output boosted by an 87hp electric motor powered by a battery pack neatly packaged away in the transmission tunnel.

This is one of the best looking Volvos we've seen for a good few decades and it's also notable for being the first model the brand has made at its American plant in Charleston, South Carolina. Style-wise, there are elements in the design of the larger S90 saloon, but with this mid-sized model, there are much shorter overhangs, a lipped boot lid and a racy standard body kit to emphasise the point that this Volvo is aimed at people who enjoy their driving. Under the skin, as expected, sits the same sophisticated 'Scalable Product Architecture' (SPA) platform that we've already seen, not only in this car's V60 estate showroom stablemate but also in all the brand's other most recent mid and large-size models. At the wheel ('the most important part of any car' according to Volvo's Head of Design) it's all very nice indeed, with a premium feel right across the S60 range that you only really get on the more expensive versions of BMW, Audi and Mercedes rivals. The brand says that when creating interiors, it applies the same principles that you would when designing a living room. High-quality materials, intelligent use of space and attention to detail work together to create a distinctly Swedish interior that's simple and elegant. As you might expect, the cabin directly mirrors that of this model's V60 estate stablemate, with a neat dashboard highlighted by a smart and sharp looking 9.3-inch portrait central touchscreen. There's a 442-litre boot.

Around 85% of S60 sales will be accounted for by the T5 version that we tried, mostly in 'R-Design Plus' form, which costs around £38,000. For around £900 more, there's also a more luxury-oriemtated T5 'Insciption Plus' derivative. If you want the T8 Twin Engine Plug-in hybrid, you'll need a £50,000 budget for the standard model - or around £56,000 for the uprated 'Polestar Engineered' version. All S60 models come well equipped, with full-LED headlights, auto headlamps and wipers, active high beam and front and rear parking sensors. Inside, there's a 12.3-inch Active TFT Crystal Driver's instrument display to display conventional instrument binnacle dials. Plus there's 2-Zone electronic climate control, heated front seats. Infotainment's taken care of by a 9-inch portrait-style centre touch screen that gives you access to a 170-watt 10-speaker DAB audio system, Sensus navigation and a Bluetooth hands-free 'phone system, plus compatibility with Apple CarPlay, Android Auto and 4G.

The conventional T5 petrol version manages up to 39.8mpg on the combined cycle and up to 152g/km of CO2. Obviously, the best returns come from the Twin Engine Plug-in T8 hybrid variants. The 'Twin Engine' part of the name references the way that with these models, a turbocharged 2.0-litre petrol engine is mated to an 87hp electric motor driving the rear wheels and powered by a rechargeable 10.4 kWh battery pack. This delivers an all-electric driving range that's WLTP-rated at up to 36 miles for the standard T8 variant, assuming you switch into the 'Pure' all-EV driving mode that's provided with the Twin Engine powertrain. More usually though, S60 Plug-in hybrid owners will be driving in one of the other provided drive mode settings - usually 'Hybrid', which sees the powertrain switch seamlessly between petrol and electric power, as required. There's also the option to 'Hold' the battery's charge for use later in your journey - say for town driving at the end of a long trip. Until that point though, you'd be at the wheel of quite a thirsty, mid-sized estate that'd become even less economical if you were to use the option to charge the batteries up the car on the move with the engine acting as a generator. It'd be much better of course, for an S60 Twin Engine model owner to do as much charging as possible from the mains before setting off. Customers will be able to buy a wallbox from Volvo that will charge their cars on 16-amp power in about two and a half hours. If you're out and about and find a 10-amp pubic charging point, the charging time will be slightly longer - three and a half hours - while connecting up to a normal domestic three-pin 6-amp supply will take six hours.

Volvo executive cars have usually been safe, reliable and practical - but sporty and stylish? In the past, buyers with those things as priorities may have felt inclined to look elsewhere. This third generation S60 changes that kind of thinking. It incorporates the vibrant design that's been creeping into other Volvo products for a while now and accentuates it in a sleek four-door package with a driver-focused chassis and a range of high-tech engine options highlighted by the latest-generation 'Drive-E' engines. There's a roomy cabin and the bundle of advanced safety equipment we've always expected from Volvo is also in evidence. Overall then, what we have here is a less retiring Sixty, a highly impressive package that's an intriguing alternative to the mid-sized executive mainstream. You should try it. 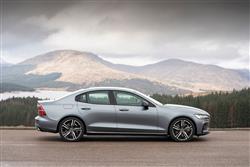 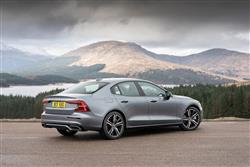 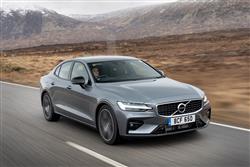 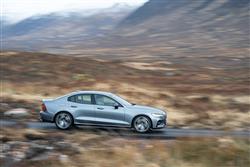 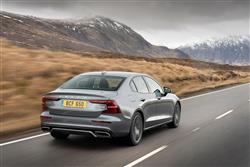 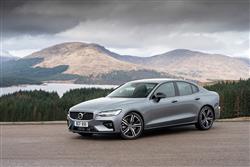