With BMW's plug-in hybrid petrol/electric 330e model, the conventional 320i variant's 184hp 2.0-litre petrol engine has been matched with an electric motor and a larger battery to create quite a package. There's the choice of either a saloon or a Touring estate and both can be specified with an xDrive powertrain. And this updated model range gains smarter looks and gets a much more sophisticated cabin.

Not everyone wanting futuristic engine technology wants their car to also look futuristic. To look like BMW's i3 for instance. If you're buying from this Bavarian brand and want a petrol/electric powerplant, the 330e Plug-in hybrid offers a more subtle way to go. You get 37.3 miles of all-electric driving range when the car's charged up, which enables the creation of some impressive overall stats - up to 217.3mpg on the WLTP combined cycle and as little as 30g/km of WLTP-rated CO2. Those figures fall only fractionally with the Touring estate body style. Take some time to understand BMW's thinking here and it's hard not to be impressed.

With this mid-term update, nothing about the engineering of this 330e has changed; but nothing really needed to. At its original launch, this 'G20'-era 330e Plug-in hybrid model took a big step forward over its previous generation predecessor, the main difference being the measurement of all-electric driving range. This was rated at only 21 miles in the previous generation 3 Series plug-in but in this current 330e design, the addition of a larger 12.0kWh battery increased the range up to 37.3 miles of zero emissions motoring when fully-charged. In other words, if you've a pretty typical daily commute, you might never have to fuel up this car to complete it. As you might expect, this kind of cleverness comes courtesy of a very advanced powerplant indeed, in this case a combination of the 184bhp 2.0-litre petrol unit from the 320i mated to an electric motor incorporating an 'XtraBoost' function. This can increase power to as much as 293hp, reducing the 62mph sprint time to six seconds exactly. The hybrid system's extra weight drops maximum speed slightly over that of the ordinary 320i, but it's still rated at 143mph. The brand's xDrive 4WD system is available on this variant.

This isn't the kind of Plug-in hybrid model you'll buy if you want to make an eco-statement. Unless you really know your BMWs, there's almost nothing to visually differentiate a 330e from any other 3 Series saloon unless you happen to spot the side panel charging flap. This enhanced model has had a useful visual update here for both Saloon and Touring estate body styles. If you know this 'G20'-series seventh generation design, you'll notice the updated front end, which offers slimmer LED headlights, a resculpted grille and gloss black brake cooling vents. M Sport variants get a distinctive hexagonal lower air intake too. There are reshaped bumpers at the rear and colour-coded trim elements, plus M Sport models feature a chunky diffuser. The major changes though, have taken place inside, where this improved 330e gets the new-look curved instrument panel that we first saw on the iX luxury EV. this incorporates a 12.3-inch digital gauge cluster and a 14.9-inch infotainment screen with the brand's latest eighth generation iDrive interface. This all allows for a big step forward in media functionality, with things like real-time mapping, a parking space locator and wireless smartphone-mirroring. Other cabin updates include slimmer air vents, a redesigned gear shifter, standardised gear shift paddles and new touch-sensitive buttons for the centre console. Otherwise, things are much as before. There's reasonably comfortable space for a couple of adults on the rear bench - it'd be a bit of a squash for three. And out back? Well the 330e saloon's luggage bay measures 375-litres - that's 105-litres down on a conventional four-door 3 Series model. The Touring estate 330e derivative has a 410-litre boot, extendable to 1,420-litres - which is 90-litres down on a conventionally-engined 3 Series Touring model.

The 330e comes in both saloon and Touring estate guises, plus there's a choice of either rear-driven or 4x4 xDrive formats. Prices start from around £43,000 and there are now just two trim levels, 'Sport' and 'M Sport'. The xDrive set-up commands an extra premium of around £1,500. There's a premium of £1,500 for the Touring estate body style. All models now include the 'BMW Live Cockpit Plus' screen set-up, which includes cloud-based BMW Maps, over-the-air updates and an improved version of the brand's 'Intelligent Personal Assistant' voice control system. The company's 'Parking assistant' is now standard, steering you automatically into spaces. And you can upgrade it with Park View, Panorama View and 3D View functions. M Sport customers are being offered a choice of exterior upgrades, including a carbonfibre rear diffuser, a large rear spoiler for the saloon and individual wheel designs of up to 20-inches in size. As for safety, well as before, an optional across the range is the brand's 'Driving Assistant Professional' pack, which includes Active Cruise Control with a Stop&Go function. There's also a 'Steering and Lane Control Assistant', which helps the driver maintain their position on motorways where the lane narrows. The 'Active Navigation' function detects when a lane change for a motorway exit is required and prepares to steer the car into that lane. The system also comprises a 'Lane Keeping Assistant' with active side collision protection and an 'Evasion Assistant'.

Despite the fact that these days there's no longer the government contribution towards the purchase price that helped to boost sales of earlier versions of the old 'F30'-series 330e, BMW still reckons this plug-in derivative will be a strong seller. The installation of a more capable 12.0kWh lithium-ion high-voltage battery in recent times has nearly doubled its potential electric driving range - to as much as 37.3 miles. And increased the all-electric top speed potential to 68mph. Charging time for the 12.0kWh battery is around two and a half hours from a conventional 7kW garage wallbox or plug-in public charge point. Hook up to a domestic 3-pin socket and the charging time will be just under five and a half hours. As usual with Plug-in hybrids, the official WLTP combined cycle fuel figures - up to 217.3mpg for the saloon and up to 201.8g/km for the Touring version - need to be taken with a pinch of salt, but the important thing is that the government believes the quoted CO2 return - which can be as little as 30g/km in the saloon or up to 32g/km in the Touring. Either way, this means a super-low Benefit-in-Kind taxation rating of as little as 12%. Of course it's unlikely that you'd ever achieve the quoted mpg and CO2 figures in the real world, but the important thing is that the government believes them, hence the attractive tax breaks that'll come as part and parcel of 330e model ownership.

In this enhanced 330e, BMW has brought us a hybrid 3 Series model that makes real world sense. There's excellent real world EV driving range, now matched to a much smarter cabin with extra technology that customers will really like. The pricing though, inevitably reflects the improvement. If you were thinking of a high-spec diesel-engined version of this Bavarian contender, we think you really have to look at a 330e as a realistic alternative. The waiting lists for this variant suggest that many potential customers already are. 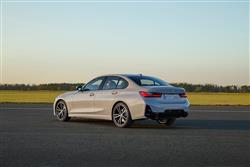 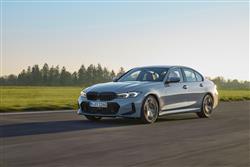 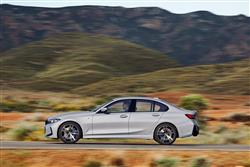 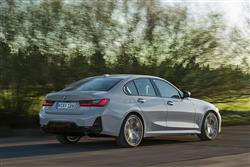 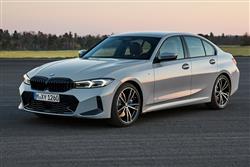 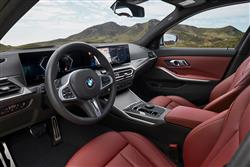