BMW's M5 is the yardstick against which all serious performance saloons are judged, a car that's now in its sixth 'F90' generation and is only these days offered in top 625hp 'Competition' guise. It's recently been lightly updated, both inside and out. And as before, features a throaty 4.,4-litre V8 beneath the bonnet. There's xDrive 4WD, a trick rear diff gets the power to the tarmac, there's a track-style paddleshift auto gearbox and you get a myriad of drive mode settings to make this the most configurable performance car on the planet. Munich, it seems, has thought of almost everything.

BMW invented the executive super saloon with their M5 and though Audi's RS6 and AMG versions of Mercedes' E-Class have offered stiff competition in recent years, for many, this remains the definitive motorsport-bred business blaster. Time to rate the improved take on this 'F90'-series sixth generation version. From the outset in 1984, this model line was all about straight six power, normal aspiration and rear wheel drive but over the years, all these original staples have evolved as BMW seeks to reinterpret what the ultimate super saloon should be. A V8 engine arrived for the 'E39' third generation version in 1998. And turbocharging was adopted for this current car's fifth generation 'F10'-series predecessor in 2011. With this 'F90'-series car, we at last got 4WD too, though BMW reassures us that you can turn it off if you want and slide the back around. Which is nice... The main reason all-wheel drive traction is needed lies with the news that engine output from the twin turbo V8 unit that's carried over here has now reached 625hp in this 'Competition' guise. We're here to put it all to the test - and enjoy a fresh chapter in the history of one of our favourite high performance standard-setters.

We've tested every generation of M5 over the last thirty five years - but nothing quite like this sixth 'F90'-series incarnation. When it first arrived in 2018, the big news was the addition of 4WD to the package, an M xDrive system incorporated in such a way as to only activate additional drive to the front wheels in extremis, so keeping this BMW's essentially rear-driven character. There's a selectable track-orientated 2WD-only driving mode if you really want to throw the back around. Power is provided by a revised version of the 4.4-litre V8 unit used by the previous 'F10'-series model. In standard form, thanks to a sharp set of twin turbos, a sophisticated cooling system, a free flowing exhaust and high injection pressures, it puts out 750Nm of torque and 625hp - 65hp more than the previous pre-2018-era generation model for reference. That's in this uprated 'Competition' form, this now being the only variant now on offer. Power's transmitted via a torque-converter 8-speed 'M Steptronic' auto transmission. The V8 powerplant doesn't quite have the thundery bluster of the AMG V8 used in this M5's Mercedes E 63 arch-rival, even if the optional M Sport-tuned tail pipes are fitted. But its output is now certainly a match for that Stuttgart saloon, as are the performance figures, which see 62mph from rest taking just 3.3s in this Competition model en route to a top speed that when de-restricted will take you to 190mph. That's Ferrari-fast. But of course a two-tonne super saloon isn't going to change direction with the agility of that Maranello model. Or so you'd think. Actually, the M5 does an astonishingly good job of disguising all that bulk, aided hugely by the Active M differential that varies torque across the M-specific back axle. A selectable 'M Dynamic Mode' holds the key to controlled drifts and entertaining handling, and offers another three modes (with DSC deactivated) which have been optimised for track driving: as well as 4WD and 4WD Sport, drivers also have the choice of 2WD mode (also automatically disabling DSC) for the traditional BMW M5 rear-wheel drive experience. BMW has tweaked the suspension dampers and the M Performance chassis for even sharper handling and there are bespoke engine mounts and special M Compound brakes. You'll need them.

This improved M5 Competition model does of course feature the most recent visual changes made to less exalted 5 Series models, so there's a redesigned front kidney grille and a smarter front apron. As before, you'd have to know your BMWs to recognise this one's exalted status. The wheel arches are gently teased over M Double-spoke 20-inch alloys, through which you glimpse the high performance braking system. In addition, there are M-specific mirrors and M5-branded side gills - but that's about it for the model-specific changes. Unless you happen to be admiring the car from an upper window. Then you'll be able to take in the lovely 'CFRP' 'CarbonFibre Reinforced Pastic' roof. It says a lot about the quality of the seventh generation 'G30' BMW 5 Series that it's only taken a bit of fairly minor fettling to make this cabin feel entirely appropriate to a car with a six-figure price tag. And to a supersonic saloon with Ferrari levels of performance. The primary contributor to that lies with the M multifunctional sports seats, which grip you tightly, use soft fine grain Merino leather and feature an 'M5' logo beneath the headrest. Changes made to this revised model include the introduction of a larger 12.3-inch central infotainment screen. And two new buttons on the centre console - like those found in the BMW M8 - provide more direct access to system settings and the various readouts in the instrument cluster and Head-Up Display. As before, you also get a red starter button and anthracite-coloured alcantara headlining. And the main controls are nicely finished - the bespoke red-striped stick you get for the new eight-speed M Stepronic auto gearbox and the thick three-spoke M leather steering wheel with its important two red Memory-setting buttons you'll want to programme to your preferences at the earliest opportunity. Through it, you view an M-branded set of graphics in the standard 'Digital Cockpit' instrument binnacle screen. In the rear, there's a fraction less space than you'd get in a rival E 63, but the difference isn't very great. Out back, there's a decent-sized 530-litre boot.

Pricing's taken quite a leap for the improved version of this sixth generation model, which now lists at around £101,000 in this 625hp Competition form, the only variant available. Back in 2011, the previous 'F10'-series rear-driven MK5 version launched at around £70,000, but of course this time round, you get AWD, more power and more kit. In case you were wondering, there's only a saloon body style on offer; some previous generation M5s have also been available in 'Touring' estate guise. BMW says it's looked at that for this 'F90'-series car, but because the rear axle and wheel travel is quite different on a 5 Series wagon, quite a lot of redevelopment would be needed. It'd be a great car though. Few commentators have questioned this car's value proposition, but we're going to by pointing out that the asking price here is vastly more than you'd pay for the top model in the conventional 5 Series range, a 550i xDrive M Sport. That variant may only put out 523hp, but it still has AWD and is only a fraction slower from rest to 62mph. Visually, it doesn't look much different. And you can get it as an estate..

BMW's quick to tell us that the kerb weight of this sixth generation 'F90'-series M5 has dropped by 15kgs over the previous model, but not so keen to remind us that this car still weighs the best part of two tonnes, despite its 'cluster architecture' underpinnings and composite carbonfibre-style roof. Still, delivering 4WD and a lot more equipment this time round without any really significant drop in fuel economy or CO2 returns has to be seen as something of a result. Let's get to the figures, though of course they're pretty irrelevant because if you were to regularly replicate them, we'd have to wonder why you bothered buying an M5 in the first place. It's interesting though, to see how they slightly shade those of its closest competitor, the Mercedes-AMG E 63. For the M5 Competition, the WLTP-rated CO2 reading is 253-255g/km. And the combined cycle fuel figure is around 25mpg.

With this improved 'F90'-series model, the development team has proved that an AWD M5 can still retain a rear-driven, enthusiast-orientated character. And delivered a super saloon that's as happy collecting your dry cleaning as it is on the Nurburgring Nordschleife. If you are on a circuit, it's good that you don't have to have all-wheel traction unless you want it, but unless you're an expert or intent on showing off, we're guessing you'll really value that extra tractional help in extremis. And on a wet, icy morning, it'll give you the small but crucial extra dose of confidence that'll allow you to enjoy this car even more. This would be our fast four-door of choice if money were no object - and, we suspect, probably yours too. We wish it wasn't so expensive, but it's more engaging than its predecessor and more real-world usable too. In short, this car is, more than ever, everything an M5 should be. 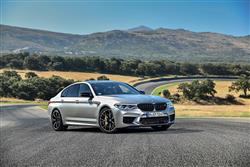 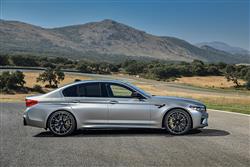 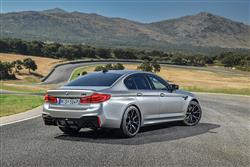 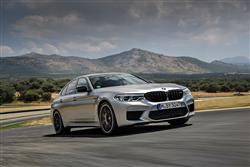 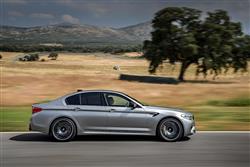 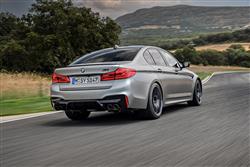