The electrified version of Citroen's Berlingo small MPV has remarkably few compromises if you're looking for a family EV. So if you can afford the price premium and cope with the 174 mile driving range, it might be tempting a option if you're looking for a full-electric compact family car and don't want a compact SUV. Here, there's the option of a 7-seat cabin too, which is rare to find in an EV at present.

Courtesy of EV power, the segment for compact People Carriers may be about to get a fresh lease of life. What used to be called the PSA Group has doggedly continued to sell small MPV as sales in this sector have declined and now may reap the benefit, with fully electrified versions of the Peugeot Rifter, the Vauxhall Combo and the subject of this test, Citroen's e-Berlingo. Like those two in-house rivals, it gets the 50kWh battery that Peugeot, Citroen and Vauxhall seem to fit to every EV they make, even the biggest MPVs. Here of course, a battery of that size is far more appropriate and it's been built into the car in a way that doesn't compromise cabin space. Sounds interesting.

As usual with Citroen EVs, the e-Berlingo offers three driving modes - 'ECO', 'Normal' and 'Power'. You won't want to spend too long in 'ECO', unless you really are eeking out battery capacity because it reduces the powertrain's normal 134bhp output to just 80bhp and also restricts the climate system to conserve power. Citroen recommends that you do most of your driving in the 'Normal' setting, which increases the motor output to 107bhp. The top 'Power' mode isn't really intended for sporty driving but for situations when you're carrying heavy loads. The powertrain also has a 'B' setting which increases the level of regenerative braking to a point where the car slows so much when you come off throttle that you'll very rarely need to use the brake, unless you're coming to a complete stop. You will want to know about driving range, which is claimed at 174 miles, around 30 miles less than the full-electric Vauxhall Corsa and Peugeot 208 superminis that also use this battery. But is much closer to the range figure of the Citroen e-C4, which also uses it. Like all electric vehicles, this one has a bit of a weight problem - that drivetrain adds over 300kgs of bulk, but that arguably helps the e-Berlingo when it comes to ride quality; you'll feel things like speed humps keenly, but at speed on the open road, it handles tarmac tears a little better than its combustion cousins.

There's very little outward differentiation to identify this particular Berlingo's all-electric status. Unless you notice the lack of tailpipes and the addition of a charging flap, blue badging and trim accents are the only giveaways. This third generation Berlingo does a better job than its Peugeot Rifter and Vauxhall Combo class counterparts in visually differentiating itself as an MPV rather than a van with windows. As usual with a Berlingo, you get a choice of wheelbases - 'M' (for 'Medium'); or 'XL', the latter enabling the fitment of a third row of seats. Like its Vauxhall and Peugeot cousins, this car sits on the PSA Group's EV-compatible e-CMP platform. Because the battery pack is mounted beneath this MPV model's floor, cabin space is not compromised at all over comparable combustion engined Berlingo models. Which means that there's simply loads of luggage space. Even the 5-seat short wheelbase 'M' model can swallow 775-litres in its boot, while the long wheelbase 'XL' version has a capacity of up to 1,050-litres. In addition, if you're taking really long items, the front passenger seat can be folded flat, allowing items like surfboards of up to 3,050mm long to be taken inside 'XL' models. The parcel shelf at the back can take up to 25kg of weight (so you can put the dog on top of the shopping). And dotted around the cabin are a multitude of storage areas which have a combined capacity of 167-litres. At the wheel, it's much as in a conventional Berlingo, except that the 8-inch central display offers various EV specific display modes and there is an EV drive toggle switch in place of the usual gear selector.

There are two trim levels on offer - 'Feel' and 'Flare XTR'. Both use the same 50kWh 100kW battery and there's the choice of standard (5-seat) or 'XL' (7-seat) body shapes. With base 'Feel' spec, pricing starts at just under £31,000. If you want the 7-seat XL 'Feel' model, you'll be looking at around £32,000. The top 'Flare XTR' model in 'M' medium length form costs around £32,000 - or around £33,000 on 7-seat 'XL' form. All 'Feel' models are delivered as standard with a capacitive eight-inch touchscreen featuring both 'Apple CarPlay' and 'Android Auto'. Inside, 'Feel' models also come with a 'Nemo' grained interior ambiance, Green Mica Cloth, a folding front passenger seat and a 1/3-2/3 folding second row bench. All models come with tray tables on the back of the front seats too. The e-Berlingo's safety tally's reasonable too, all models fitted with Citroen's Safety Pack that features Active Lane Keeping Assist, Active Safety Brake, Cruise Control with a Speed Limiter, Speed Limit Recognition and Recommendation, and Driver Attention Alert. Plus all 'Feel' models also come as standard with rear parking sensors.

We mentioned the WLTP-rated range in our Driving Experience section - 174 miles. To optimise range, you'll need to make full use of the car's regenerative braking system, regularly activating the provided 'B' mode via the central console to maximise energy recovery during braking. As you'd want, the e-Berlingo supports up to 100kW rapid (DC) charging, with an 80% re-charge taking less than 30 minutes, while a full charge from a 7.4 kW single-phase wallbox takes 7.5 hours thanks to the 7.4kW on-board charger. Customers with access to three-phase power can specify an optional 11kW on-board charger that will charge the e-Berlingo in 4 hours 45 minutes, when using a wallbox that also supports this faster home-charging solution. As usual with a compact zero emissions EV model, there's a Benefit-in-Kind first year tax rate of just 1%. And exemption from London congestion and ultra-low emissions charges. Maintenance intervals are much as they would be for a combustion model, but there'll be less for the workshop to do, so costs should be lower. There are plenty of Citroen outlets to choose from, so you should never be too far from one. So you can budget ahead, the French maker offers its 'Citroen Maintenance' scheme that lets you pay either a one-off fee or monthly instalments to cover the cost of the routine upkeep of your car for as long as three years and 35,000 miles.

There must be plenty of people out there who want a family-shaped compact electric vehicle - maybe as a second car - but don't want an SUV. It would have to be realistically priced, have an acceptable driving range and not look too van-like. The e-Berlingo, to our eyes anyway, ticks all these boxes. For whatever reason, there's a bit less of a whiff of LCV here than there is with this model's two Stellantis Group cousins, the Vauxhall Combo-e Life and the Peugeot e-Rifter. And the option of having 7 seats gives this Citroen a big advantage over a comparably sized (and probably pricier) all-electric compact SUV. Plus this Berlingo can be a van if you need it to be. Jack of all trades then; and master of one - the art of by-passing fuel stations. 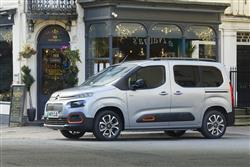 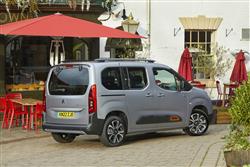 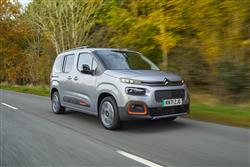 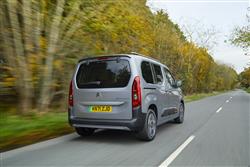 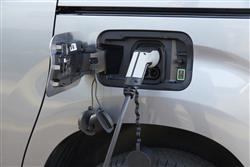 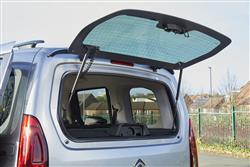