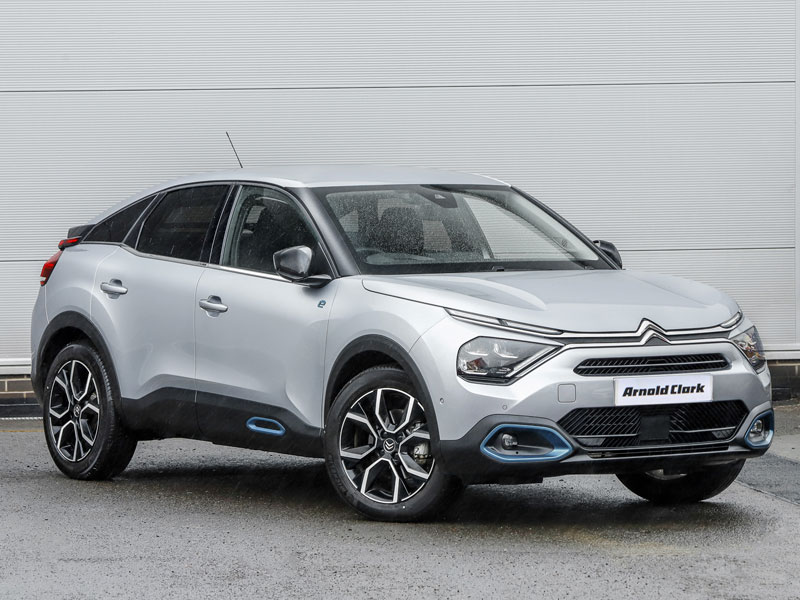 The e-C4 adds a bit of colour to the EV part of the family hatch segment, thinks Jonathan Crouch.

The looks have a crossover vibe, the range is a reasonable 217 miles and the cabin is the most comfortable in the class. If you're fed up with clinical family EVs, here's one that might charm you.

Citroen is a company with a reputation for trying to do things differently. Unfortunately though, the reality is that it's not always been a company able to do things differently from sister brand Peugeot. In the last few decades, a depressing cloak of PSA Group conformity has characterised family offerings from the double chevron marque. But gradually things seem to be changing and Citroens are being set apart once more. First, with details things like Airbumps and squashier seats. And now with more fundamental engineering. For an example of that, take the subject of this test, the e-C4. It's all-electric - which is significant because electrified versions of Peugeots bigger than supermini-size usually prefer a plug-in petrol/electric PHEV drivetrain. PSA apparently now gives its brands a choice between PHEV and BEV and Citroen wants to be different. But how different in this case? That's what we're here to find out.

Rather interestingly, this is one EV that doesn't spear away from rest like a scalded cat. That attribute's a bit pointless, it cuts across this car's laid back Gallic demeanour and it needlessly depletes battery reserves, so Citroen hasn't bothered with it here. The e-C4's a bit like Mazda's rival MX-30 in that respect. Not that the e-C4 is slow; the 134bhp electric motor allows 62mph to be dispatched in 9.7s on the way to a maximum you'll never bother with (97mph). What you'll notice more is the relaxed gait. It's inevitably not as light on its feet through the corners as a combustion-engined C4: the weight of the 50kWh battery has to tell somewhere. Your driving position is somewhere between that of a family hatch and an SUV and you get a couple of pedals, along with a small straightforward gear selector. There's no 'one pedal' driving option, like you get in a Nissan LEAF, but there's an extra B mode, which gives greater lift-off deceleration, so boosting the battery's energy-harvesting efforts so that you can get somewhere close to the claimed 217 mile range figure. The ride is very comfort-orientated, as you'd expect from a Citroen thanks to the clever Progressive Hydraulic suspension set-up. Here, the car's springs and shock absorbers work in concert with hydraulic compression and rebound stops, which are supposed to slow body movement over bumps and tarmac tears.

Citroen isn't one of those brands who think that a full-EV needs to look radically different from a combustion hatch, so you'll struggle to tell this e-C4 apart from its combustion-engined C4 showroom counterparts, unless you happen to notice the badging or the charging flap. Like other C4 variants, this one confirms that the delineating line between family hatch and compact SUV design is being ever more blurred. Which many folk in search of a compact hatch will think to be no bad thing. Citroen says the crossover cues aren't for crossover purposes. The higher-than-Focus-class-average 156mm ride height is there to offer a high vantage point and better all-round visibility. The matte black-finished wheel arches aren't for arduous tracks but to prevent supermarket car park dings. And there's plenty of signature Citroen design, with stylishly-shaped signature lights and chromed Chevrons that stretch across the car's width. Plus there's and an air intake grille featuring a pattern first seen on the brand's recent 19_19 concept car. If you want an alternative to this e-C4 hatch, Citroen also offers an e-C4 X saloon. Inside, the dash gets the kind of big 10-inch centre touchscreen that's in current vogue. And a fully digitalised instrument binnacle. Thankfully, the climate controls are separated out from the screen on the centre stack. Six interior colour schemes are on offer, all aimed at making you feel as 'if you're in your living room' - though it's a pity we don't get some of the more interesting colour packages offered in Europe. For the rear seat, the brand claims best-in-class knee room and offers a wide range of storage compartments. Plus there's a decently-sized 380-litre boot (extendable to 1,250-litres) which is exactly the same size as that of the combustion-engined model.

Prices for the e-C4 sit mainly in the £31,000 to £35,000 bracket and there are three trim levels to choose from - 'Sense', 'C-Series Edition' and 'Shine Plus'. There's also the option of an alternative e-C4 X saloon body shape. All variants offer a tablet computer holder for front seat passengers, LED interior lighting, a rear parking camera and adaptive cruise control further up the range. But you'll need to stretch to top 'Shine Plus' trim to get the brand's premium hi-fi system featuring uprated speakers and the addition of a subwoofer. All e-C4 models get the brand's Advanced Comfort seats, which offer extra support and can be enhanced with optional heating and massaging systems. Various interior colour scheme packages allow you to personalise the cabin. And wheel sizes range from 16 to 18-inches, with the e-C4 featuring an exclusive 18-inch 'Crosslite' alloy wheel design. The freshly designed 10-inch digital dashboard and instrument binnacle comes as part of the standard package, as does wireless 'phone charging and 'Apple CarPlay' and 'Android Auto' smartphone-mirroring connectivity. A nice optional touch you might well want to consider is a full-HD camera built into the rear view mirror which can take photos or video stored on a 16GB memory card. Safety-wise, there's no fewer than 20 different driver assistance features, including Highway Driving Assist and a 'level 2' semi-autonomous drive system incorporating Adaptive Cruise Control and Lane Keeping Assist.

You might struggle to replicate that claimed 217 mile range figure we quoted earlier, unless you habitually drive like Miss Marple (it's 224 miles with the e-C4 X saloon), but that's hardly an issue exclusive to Citroen when it comes to EV mileage claims. We found that in urban use, it's much easier to get closer to that target figure. Especially since Citroen made changes to the drive system so that range in a variety of conditions is said to be improved, though the stated WLTP mileage reading we just quoted hasn't officially changed. The e-C4 is fitted with an 11kW charger, which can charge from empty in around 7.5 hours using a 32amp home wallbox. It also has 100kW fast charger, which can achieve an 80% charge in around half an hour using a public fast charger. From launch, all customers will be offered a Pod Point Solo Smart Charger included in the price. As usual with an electric car, you can control charging via your smartphone and take advantage of lower cost off-peak electricity tariffs. You'll properly want to keep garage costs in check by opting for the affordable 3 year servicing plan that is available at point of purchase. Finally, there's the usual Citroen three year / 60,000 mile warranty. The insurance group for all variants is rated at 22P.

You might not be quite ready to make the step from family hatch to SUV. You also might not be quite ready to make the step from combustion engine to full-electric. This Citroen e-C4 makes either of these sizemic steps a good deal more plateable to folk wavering on the edge of a crossover culture or a nightly charging regime. You get most of the visual cues associated with an SUV. And enough driving range to make the switch from combustion power to EV realistic enough to consider. Let's be honest, all of this isn't going to be enough to allow this car to out-sell the two family hatch EV models it's primarily targeted at, the Nissan LEAF and the Volkswagen ID.3. But the e-C4 has a much more individualistic charismatic feel than either of those two cars. It's a proper Citroen, which means it's interesting, stylish and extremely comfortable. And a proper Citroen is something we always welcome. If you're looking for a wider choice in the EV part of the family hatchback segment, you should too. 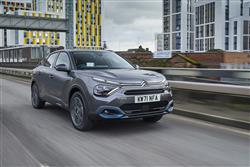 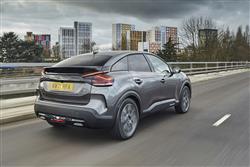 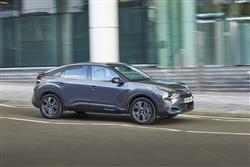 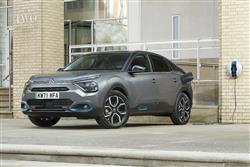 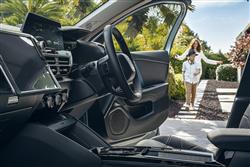 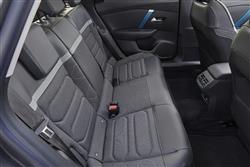