Here's a car that taps into a couple of the fastest growing trends in the automotive market: those for full-electric vehicles and small SUVs. The DS 3 Crossback E-TENSE might have an awkward name but on paper at least, it promises to bring buyers some of the best things from both of these market genres. And it's another model that should really move the DS brand forward.

DS uses 'E-TENSE' branding for its electric variants; the larger DS 7 Crossback E-TENSE is a 'PHEV' or 'Plug-in Hybrid Electric Vehicle', which uses a 1.6-litre petrol engine combined with a battery. A DS 3 Crossback E-TENSE though, dispenses with combustion engineering altogether and is a 'BEV' (or 'Battery Electric Vehicle'). At its launch in 2019, this was the first full-battery-powered small SUV on the market. And certainly the first of many. It uses the same all-electric engineering we've subsequently also seen in other PSA Group products, the Vauxhall Corsa-e and Peugeot's e-208 and e-2008 models.

This all-electric 'E-Tense' variant is made possible due to the fact that the CMP platform that the DS 3 Crossback sits upon has, rather cleverly, been engineered to accept both conventional and full-battery powertrains. This 'full-battery' set-up sees a 136hp electric motor linked to a 50kWh lithium-ion battery and a system for recovering energy during acceleration and braking, with effectiveness you can maximise via two driver-activated energy recovery settings - 'Normal' and 'Brake'. A DS 3 Crossback E-Tense also offers three main selectable driving modes - 'Eco', 'Normal' and 'Sport', the last of which delivers the powertrain's maximum 260Nm torque figure to the tarmac the instant the wheels begin to turn. Which is why, despite the fact that this electric derivative tips the scales at over one and a half tonnes, rest to 62mph can be dispatched in just 8.7s. Of course, drive like that too often and you're not going to get anywhere near the quoted WLTP-rated driving range of around 200 miles. The battery weighs 350kg, but the car's kerb weight has risen by only 300kg - all of this mass low and centralised - because the engine and its ancillaries are no longer needed. All EVs are quiet but many suffer from wind noise and tyre roar; there's little of that here. What you do get - to meet the current trend - is plenty of semi-autonomous driving technology on offer (most of it optional). The 'DS Drive Assist' package combines 'Active Cruise Control' and 'Lane Keeping Assist' in a form that sees the vehicle managing both steering and speed.

At first glance, there is not much to mark this 'zero emission' model out from other variants in the DS 3 Crossback range. It's all very subtle, key visual differentiation points including this derivative's exclusive Pearl Crystal paint finish, extra satin-chrome exterior touches and E-TENSE badging. Otherwise, this variant is exactly like its petrol and diesel showroom stablemates, so it's 4.17-metres long, 1.79-metres wide and 1.53-metres high, measurements which position this car amongst the bigger contenders in the segment for small premium SUVs. At the front end, subtle angled bonnet crease lines flow into a diamond-effect grille that can be finished in matt or gloss black. It's separated from the glistening headlamps by distinctive trimming strips - the brand calls them 'DS Wings' - that can feature either in chrome or more gloss black. And it's all set off by vertically-beaded LED daytime running lamps, which frame the corners of the bumper. At the rear, this E-TENSE variant has a uniquely-styled rear bumper - one of course that doesn't have to incorporate an exhaust pipe. Inside, the EV changes include dedicated information displayed in the digital instrument binnacle and an auto gear lever embossed with the 'E-TENSE' emblem. As with any other DS 3 Crossback, the cabin features an over-riding diamond-shaped theme - the digital instrument pack, the dashboard switches, the air vents and many other interior fitments all bear this shape. There's a 7-inch centre-dash screen - which grows to 10-inches in size (as here) if you get a variant fitted with navigation. In the rear, the window line in the rear is rather high, so if you've got kids, you might want to make sure they're OK with that. Because this EV model's batteries are housed within this design's clever multi-energy CMP architecture, the boot capacity (350-litres) is exactly the same as what you'd get in a petrol or diesel version of this model. Push forward the 60:40-split backrest and 1,050-litres of space is revealed.

Make the most of the two driver-activated energy recovery settings ('Normal' and 'Brake') and consistently drive with the car in its most frugal 'Eco' drive mode setting and you might potentially get somewhere close to the quoted WLTP-rated driving range of 206 miles (that on the cycle's 'low' rating); it's 191 miles on the 'High' rating. Like most full-EVs, the DS 3 CROSSBACK E-TENSE carries a high-capacity on board charger, available in single phase 7kW guise or in three phase 11kW form - the single phase 7kW on board charger is the standard offering for the UK market. As usual with a car of this kind, there are a host of charging options. Charging at a dedicated wall box or standard public terminal will take 8 or 5 hours respectively. Additionally the car can of course be charged from a standard domestic socket. At a public 100kW rapid charge terminal, 80% of the battery can be recharged in just 30 minutes, which represents an average range of 5.5 miles per charging minute. You might expect a newly-established brand to make an extra effort with warranty provision, but there's only the usual unremarkable three year/60,000-mile package. The electric 'E-Tense' model gets a separate eight year / 100,000 mile warranty for its electrical powertrain.

The DS 3 Crossback E-TENSE is hardly inexpensive but in compensation it's a satisfyingly desirable take on full battery-powered small SUV motoring. The design is individual, the cabin feels special and it's reasonably well equipped. Plus the full-electric technology works unobtrusively and the cabin's supremely quiet. Are there issues? Well the driving range being offered here is competitive, but some way from being at the forefront of the class - both a Renault ZOE and a BMW i3 are small EV models that'll take you much further. If that's not really an issue, you want an SUV body style and you'd like something a little showier than this car's cousin, the Peugeot e-2008, then this E-TENSE model should figure on your wish list. This car, like its brand, is aspirational. If you are too and you're shopping in this segment while looking for something a bit different, you might well like it. 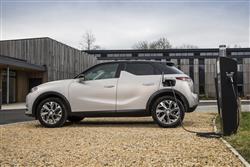 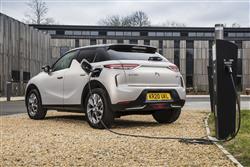 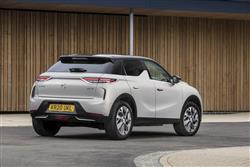 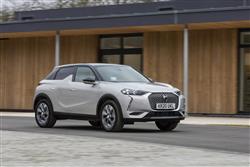 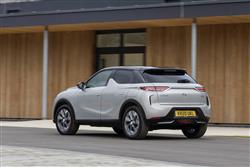 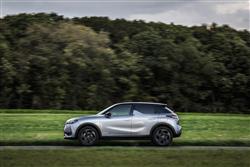