The Fiat 500L MPV has sharpened up its act. Jonathan Crouch looks at what's now on offer.

The 500L is a five-seater compact MPV that doesn't feel like one, taking care of people and baggage-carrying chores with a practical dash of Italian flair. In this improved form, it's safer, smarter and better connected. And it's more personalisable than any other contender in this class.

Fiat has its own 'fortune 500', a little family of cars on which present and future hopes of the brand are these days almost exclusively based. The 500 we all think of is the cheeky little three-door citycar that started this model's retro revolution but Fiat always felt that this should be merely the starting rung on an ownership ladder designed to be fine for families as well as fashion-conscious urbanistas. A ladder encompassing seven seats and SUVs as well as the model we're going to look at here, the spacious and now much improved 500L. Fiat's fame of course has traditionally been founded on much smaller cars than this - but the brand needs to get better at being bigger if legions of owners of the 500 citycar are not to be lost to other makers as their needs and families grow. Launched originally back in 2013, the 500L aimed to give these people a model to trade up to - but it needed a bit of polishing. That's what's taken place here.

You get an urban confidence with the 500L, something encouraged by the light lock-to-lock steering. A car you might enjoy on the school run. If not quite so much pushing on beyond the city limits. Here, you might wish that the steering offered you a little more feedback, a pity because in other respects, this is one of the more dynamically able five-seat mini-MPVs on the market. Unfortunately, only one engine is now on offer, a 95bhp petrol 1.4 that's one of Fiat's older efforts and which, thanks to limited pulling power, doesn't really feel as fast as the performance stats suggest (rest to 62mph in 12.8s on the way to 111mph). Beyond the city limits, the 500L feels a little out of its comfort zone. Here, you might wish that the steering offered you a little more feedback and that there was a bit less body roll through the bends. That probably won't bother most likely owners too much but on longer trips, they might wish that the issue of refinement had been slightly more thoroughly addressed. We highlighted this when we first tested this car back in 2012 and nothing's been done to improve things since, which is a touch disappointing. It isn't something you really notice at lower speeds, but when you're pushing or are cruising at or around the legal limit on the highway, there's simply more road and wind noise than you'd normally expect from a car of this kind. If you choose your 500L in 'Cross' form, you get some mild off road ability, thanks to the inclusion of a 'Mode Selector' with a choice of 'Normal', 'Traction+' and 'Gravity Control' settings.

You tend to approach this 500L expecting it to be a pumped-up version of the 500 citycar - which of course it isn't. To make this model as big as it needed to be - fully 60cm longer and 18cm taller than an ordinary 500, so in Fiat terms, longer than a Punto supermini and as wide as a Tipo family hatch - Andreas Wuppinger's styling team had to use a Punto floorplan as the basis for something quite different. Then give the end result a recognisable '500'-style twist, hence the familiar wide-eyed front end. As BMW found when trying to super-size the MINI to create the MINI Countryman, that isn't a recipe for aesthetic elegance - and it certainly isn't here - but it has left room for some very clever touches. Just look at the flow of the wraparound windscreen for instance, designed to give almost 360-degree vision. This improved model has in recent times been lightly re-styled and now features LED daytime running lights. Plus the revised front bumper and a chromed-studded three-dimensional lower grille mesh now give the car a more elegant look. Inside, the instrument binnacle you view through the re-styled steering wheel has been re-designed too. As before, this is one of the most practical models in the compact MPV class. Three adults can comfortably sit on the back seat, plus standard models have a 455-litre boot.

It isn't only the concept, the size and the styling of this model that's different from the 500 citycar. The price is very different too. The asking figures start from just under £17,000 and run to just under £19,000. Buyers are presented with the choice of four main variants - standard 'Urban', the 'City Cross', the SUV-like 'Cross' model and the sportier 'S-Design'. Has any five-seater compact family five-door ever offered more scope for buyer personalisation than this one? We doubt it. There are decal packs to suit every taste and a wider range of paint colours than any compact car has ever offered. Whichever shade you choose, you can contrast it with a different finish for the wheels, the door mirrors - oh and the roof too. Inside, there's a body coloured-painted dashboard offered in five different shades or with beautiful suede trim. You can also specify a two-tone steering wheel and there's a choice of red or grey seat inserts. But of course that's just the start. Fiat promises buyers a choice of over 100 unique accessories in a list that goes far beyond the usual bodykit, stereo and towbar choices. So your 500L might come with a bespoke PC bag, a steel clothes hook, an iPod holder or even a key in your own personal colour. It could even have a coffee maker. Yes really.

The running cost returns of the 95bhp 1.4-litre 16v petrol unit aren't especially eye-catching - 46.3mpg on the combined cycle and 143g/km of CO2. Still, you can do your bit on the frugality side thanks to the clever 'eco:Drive LIVE' system that's built into the centre-dash infotainment screen in most variants. Fiat says it's a bit like having a personal trainer on board. This electronic coach isn't looking to fight the flab, but instead is looking to trim your figures rather than your figure; specifically those for fuel and CO2 efficiency. Earlier versions of the 'eco:Drive' system did this by monitoring your driving style, then producing a report you had to download onto a USB stick, then view on your home PC - which was all a bit nerdish. Here, it's all done with live assistance, analysing your driving in real time and making suggestions instantly displayed on the dash-mounted UConnect infotainment screen. Your progress is graded in four areas - acceleration, deceleration, speed and shifting - and there's a little leafy tree graphic and a continually updated 'current trip index score' to show you how effective your efforts towards frugality have been. What else? Servicing? Well that will be needed every 18,000 miles.

So, a compact MPV based on the underpinnings of a small family runabout. Nothing new there. Unless you apply fashionable thinking to the purchase of such a thing - in which case, this Fiat 500L remains a refreshingly different choice. It's certainly different from the 500 citycar we all know - but then of course, to suit the intended family role, it has to be. Not everyone will like the styling approach necessary to achieve this but it's surely one that sets it apart from rivals. A unique look, just as every 500 should have. Fun, cheeky and cool, this Fiat claims to suit the sort of people looking for a car to be an extension of their personality: a car that reflects their passion for life. We're not sure if any compact people carrier can really do all that but of all those available, there's little doubt that this 500L is the one that gets closest to hitting the mark. It's a sensible family car you can really feel good about. 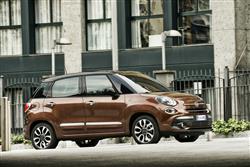 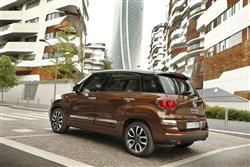 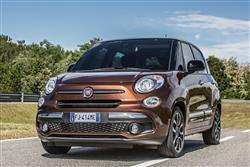 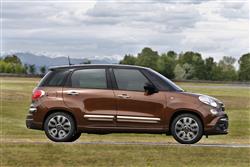 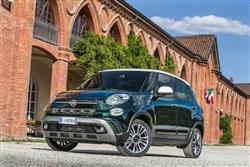 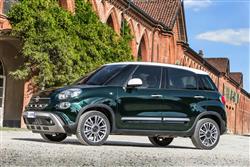