Ford hopes its petrol/electric hybrid Mondeo can convert enviro-conscious buyers in the medium range segment. This isn't a hybrid of the fashionable Plug-in sort, but it can still return over 50 to the gallon in regular use and offer a tax-busting sub-100g/km CO2 rating. And you can have it in either saloon or estate guises.

Today, Ford offers all kinds of electrified powerplants in its cars, but the first such engine dates back to 2014 and it was this self-charging full-Hybrid unit fitted to the fourth generation Mondeo. It's based around one of the brand's older petrol engines - a 2.0-litre TiVCT unit - and combines it with two electric motors, one to drive the wheels and another to supply regenerative charging, these being powered by a 1.4kWh lithium-ion battery. To start with, because this confection was primarily targeted at American buyers, it was only available with a four-door body style that few in our market wanted. But in 2019, as part of a package of updates made to this car, Ford widened the hybrid engine's availability to include this estate body shape. And at the same time made the powertrain smoother and improved its regenerative braking capability. Let's put this rather unique Mondeo to the test.

Unlike the hybrid options offered in this segment by Volkswagen, Skoda and Peugeot, this Mondeo's HEV set-up isn't one of the pricey plug-in sort, which means you don't get astonishing all-electric style fuel returns. But then you do without the outlandish asking prices that those brands will ask for their full-hybrid models too. Instead, a Mondeo Hybrid has the more conventional type of 'self-charging' petrol/electric set-up you'd find in a slightly cheaper but smaller and less powerful model like Toyota's Prius, where the engine cuts in and out to assist electric propulsion as and when required. Ford's third generation Kuga SUV offers this kind of hybrid too, but this Mondeo's set-up is a much older design based around an aging 2.0 TiVCT petrol powerplant that was long ago deleted from the company's portfolio in its conventional form. Here, that unit is mated to an 88kW electric motor and a 1.4 kWh lithium-ion battery that both sit at the back of the car but drive the front wheels via a power-split 6-speed automatic auto transmission. That auto 'box decides at any given time whether power should come from the engine, the electric motor, both at once or neither. Plus it includes an extra 'L' setting that forces the engine to rev harder and is intended to help control your speed in tricky downhill conditions. The whole self-shifting package works like the kind of CVT rubber band auto transmission that Toyota and Lexus hybrid products use. Which means that, like those cars, there's often a tendency for the engine not to feel very interested in what your right foot is asking from it. Rest to 62mph is supposed to take 9.2s en route to 116mph, but this car actually doesn't feel anything like that fast. Much of the energy that charges the battery is harvested through the regenerative braking process, now achieved much more smoothly in this car without the kind of 'grabby' brake pedal that afflicted this package in its earlier forms. Plus more energy is harvested when coasting, when it's common for the engine to cut out completely, even at motorway speeds. And the system's ability to allow you to pull away silently on battery-only power always tends to fill you with a smug sense of eco-friendliness. But we're disappointed by the way that the whole package kills any real sense of driving pleasure, which was the thing that always used to set a Mondeo apart.

Unless you knew this Mondeo was a hybrid, you probably wouldn't pick up on the fact. It's low key and is offered in both saloon and estate forms, both of which feature subtle green and blue badging. Like the rest of the Mondeo range, this one gets Ford's Aston Martin lookalike grille with laser-cut headlamps and a power dome bonnet, while the fuselage is sculptured and sophisticated in its design. Ford calls the saloon's roofline 'a sports coupe profile' which might be pushing it a bit, but it's quite a handsome thing. Inside, Mondeo drivers are met with a digital analogue instrument cluster, while a wrap-around centre console design delivers a cockpit-like feel. There are touchpad-style buttons for the major functions. Materials quality is higher than you might expect, with a soft-touch instrument panel and flock-lined central front storage area and glovebox, but it's still a little shy of the premium German marques. Unfortunately, the electric motor and its lithium-ion battery robs much of the boot space compared to a conventional Mondeo. The estate offers 403-litres (the saloon boot is just 383-litres).

Ford has pitched the Mondeo Hybrid at around £28,000: that's for the saloon. You'll pay £1,420 more for the alternative estate body style. These kinds of figures seem reasonable given that you'd pay about this much for a top-spec Toyota Prius, a smaller car that's got over 50PS less power. Equipment from the base 'Titanium Edition' trim level offered includes climate control, cruise control, heated seats and Bluetooth, plus there are a bunch of interesting options to choose from. If you want more, this drivetrain is also offered from around £31,500 with the top 'Vignale' level of Mondeo trim. A key Mondeo safety technology feature is Pedestrian Detection, which identifies people and reduces the severity of collisions at speeds of up to 50mph. If a pedestrian is detected in front of the car and a collision becomes imminent, the driver will first receive an audible and visual warning. Should that driver not respond, the system then shortens the time required to apply the brakes by reducing the gap between brake pads and discs. If there is still no response from the person at the wheel, the brakes will be applied autonomously and the vehicle speed reduced. Active City Stop, a spin-off of this technology, operates at speeds of up to 25mph and aims to prevent you rear-ending the car in front in stop/start traffic. A radar system also drives the Distance Indication feature and Adaptive Cruise Control technology. Cameras support a Lane Keeping Aid and Traffic Sign Recognition, which provides the driver with the speed limit, cancellation signs and overtaking regulations flashed up on the instrument cluster display. There are also full adaptive LED headlights on offer, as well as Active Park Assist featuring Perpendicular Parking.

The Hybrid set-up on offer here can't be plugged in - it's of the older-tech 'self-charging' sort - but you'd still think that all the ingredients would be here for impressively low running cost returns. A 2.0 TiVCT petrol unit is mated to an 88kW electric motor and a 1.4 kWh lithium-ion battery that both sit at the back of the car but drive the front wheels via a power-split 6-speed automatic transmission. That auto 'box decides at any given time whether power should come from the engine, the electric motor, both at once or neither - and you can monitor what's being powered by what via a selectable energy display in the 'apps' section of the SYNC3 centre-dash screen. From start-off, the car always reverts to battery power only and it often also does so not only in urban motoring but also at cruising speeds - even quite high ones. Which is why Ford is able to quote a tax-busting NEDC-rated CO2 figure for this car - just 98g/km if you've a 'Titanium'-spec version with 18-inch wheels. For the top 'Vignale' variant with 19-inch wheels, the figure is 103g/km. As for fuel consumption, well unless you were to drive this car exclusively in urban conditions, it wouldn't be as economic as the diesel variant but it still supposed to manage up to 52.3mpg on the WLTP combined cycle, whichever trim level you select. In this test, we managed returns somewhere in the forties.

So, how to summarise? Well Ford's trying hard here to promote this car's hybrid powerplant, but we think it unlikely the brand will gain the kind of customer take-up it's seeking from models equipped with this unit, even with the addition of the extra Estate body style. Certainly, the fact that this engine's restricted to the more expensive leather-lined trim levels and can't be had with the hatch body shape won't help. Ultimately, in this form a Mondeo is a bit pricey for someone considering a 'Prius'-style self-charging hybrid. And it won't interest many business buyers in the larger 'D'-segment because it lacks the clever Plug-in tech that more direct rivals use. The bottom line is though, that this Ford offers by far the cheapest petrol/electric option in the class. That's got to count for something. Now the Blue Oval brand just needs to work on its marketing proposition. 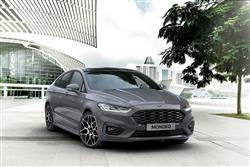 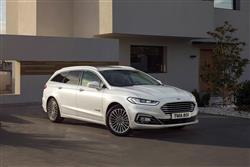 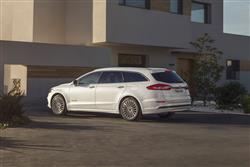 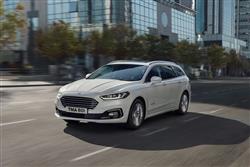 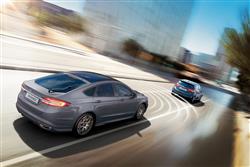 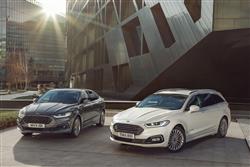