Ford's improved MK4 model Mondeo looks to revive the flagging medium-range family hatch sector. Does it have what it takes to break the spell of the premium marques? Jonathan Crouch reports on the improved range.

The revised fourth generation Ford Mondeo pulls out all the stops in a bid to convince British buyers that the medium-range 'D'-segment family hatch isn't a thing of the past. With tight pricing, comfort-orientated drive dynamics, the sort of cabin tech you might expect to be the preserve of the premium German marques and the option of hybrid power, there looks to be life in the Mondeo yet.

A lesser manufacturer than Ford might well have given up. After all, sales of mainstream 'D'-segment medium range family saloons and hatches have collapsed in recent years, falling to around a third what they once were as recently as ten years ago. The Mondeo had the unfortunate distinction of being a car that got markedly better with every consecutive generation but which was rewarded with progressively worse sales. Can this current improved MK4 model turn things around? It has market conditions on its side. The economy has improved and the love affair with premium badges couldn't last forever. As the used market became flooded with BMWs and Audis, resale values crumbled. If Ford could step in with a genuinely convincing reason to buy something bigger and more luxurious, buyers might return to the fold. To that end, the Blue Oval has pulled out all the stops with this improved fourth generation model.

Ford's has slimmed down the engine choices on offer. Most customers choose a 2.0-litre EcoBlue diesel engine good for either 150PS or 190PS, both variants featuring single variable geometry turbocharger technology. The 150PS and 190PS diesels are available with Ford's Intelligent All-Wheel Drive system, which offers a seamless transition between front-wheel drive and all-wheel-drive performance to automatically enhance traction and road-holding when needed. Buyers can alternatively opt for a Mondeo Hybrid. Unlike the hybrid option you get in a rival Volkswagen Passat, this set-up isn't one of the pricey plug-in sort, which means you don't get astonishing all-electric style fuel returns - but then you do without the Passat's outlandish asking price too. Instead, a Mondeo Hybrid has the more conventional type of petrol/electric set-up you'd find in a slightly cheaper but smaller and less powerful rival like Toyota's Prius where the engine cuts in and out to assist electric propulsion as and when required. In the Ford's case, that powerplant is a 187PS 2.0-litre unit whose efforts are supplemented by a 88kW electric motor driving the front wheels. There's another electric motor for regenerative charging only and a lithium-ion battery pack with an output of 35kW and a capacity of 1.4 kWh, the whole set-up operating via the kind of CVT auto gearbox that's a normal feature in hybrids of this sort.

Ford has subtly updated the look of this fourth generation Mondeo, revising the upper and lower front grille, re-styling the bumpers, introducing more stylish 'C'-shaped tail lights and incorporating fresh fog light and LED daytime running light designs. As before, the range is primarily based around hatch and Estate body shapes, the station wagon version order-able with a retractable panoramic glass roof. Inside, the dash now gets the brand's SYNC 3 communications and entertainment system, which allows Mondeo drivers to control audio, navigation and climate functions plus connected smartphones using simple voice commands. Supported by an 8-inch colour touchscreen that can be operated using pinch and swipe gestures, SYNC 3 is compatible with Apple CarPlay and Android Auto smartphone-mirroring. As before, there's a digital analogue instrument cluster, while a wrap-around centre console design delivers a cockpit-like feel. Materials quality is better than you might expect from a mainstream brand, with a soft-touch instrument panel and flock-lined central front storage area and glovebox. Smart-design front seats feature a thin seat back - enabling rear seat passengers to enjoy additional legroom without sacrificing space for driver and front passenger.

Prices start at around £22,000 and range up to around £35,000 across a range of five-door hatch, saloon and estate body styles. Trim levels now start with 'Zetec Edition', then buyers have the choice of something sportier ('ST-Line Edtion') or plusher ('Titanium Edition'). For something truly luxurious, you'll need the flagship 'Vignale' variant. As standard, all models have navigation, a DAB tuner, front and rear parking sensors and cruise control with a speed limiter. 'ST-Line' variants introduce extras including a body styling kit, lowered sports suspension, a Ford Power start button, a darkened headliner, privacy glass and 19-inch alloy wheels. Safety technology is a strongpoint. All derivatves get 'Active City Stop' autonomous braking to mitigate or avoid low-speed collisions at under 31mph. Plus there's Pedestrian Detection, which identifies people and reduces the severity of collisions at speeds of up to 50mph. A radar system also drives the Distance Indication feature and improved Adaptive Cruise Control technology. Cameras support a Lane Keeping Aid and Traffic Sign Recognition, which provides the driver with the speed limit, cancellation signs and overtaking regulations flashed up on the instrument cluster display. There are also full adaptive LED headlights on offer, as well as Active Park Assist featuring Perpendicular Parking.

The Mondeo can't succeed in its particular sector with off-pace economy and emissions. Despite fleet sales falling as a proportion of total Mondeo registrations, Ford cannot afford to overlook this target market segment, especially if it wants to resurrect its company car client base. Fleet managers will like the look of what they're seeing here though with the WLTP figures. The Hybrid saloon version, for instance, can record up to 94g/km of CO2 or up to 99g/km in Estate guise. The Hybrid can manage up to 52.3mpg of WLTP-rated economy. Most company folk though, will continue to want a diesel and Ford's black pump-fuelled units have followed the downsizing trend of the petrol engines, delivering better fuel efficiency and emissions at the same time as power has increased thanks to advanced technology. According to WLTP figures, the latest 2.0-litre EcoBlue diesel engine delivers up to 116g/km of CO2 in 150PS form and 56.5mpg on the combined cycle. And 127g/km of CO2 and up to 51.4mpg in 190PS auto guise. That's down to quite a lot of clever engineering. An integrated intake system with mirror-image porting for optimised engine breathing; a low-inertia turbocharger that enhances low-end torque; and a high-pressure fuel injection system that's more responsive, quieter and offers more precise fuel delivery than the outgoing 2.0-litre TDCi diesel engines. All of it helps this Mondeo meet the latest stringent Euro 6d Temp emissions standards. Standard SCR emissions after-treatment contributes to improved NOX reduction too.

For most of its customers most of the time, the fourth generation version of Ford's 'one world' medium range family car is a better bet than ever in this improved guise. Today, a car of this kind must be a more luxurious and more technologically-advanced thing, so this Mondeo is. You could pay more than twice as much for something with a prestigious German badge and still fail to match this car's refinement and much of the kind of high-tech kit that really sets this Ford apart from slightly cheaper rivals like Vauxhall's Insignia. And it's certainly a closer match and arguably a more interesting option in this sector than Volkswagen's classy eight generation Passat. In short, this is a model rejuvenated. It's worth your attention. 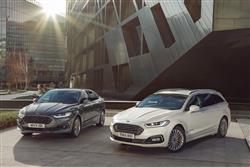 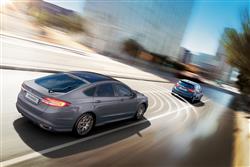 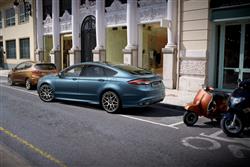 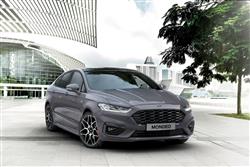 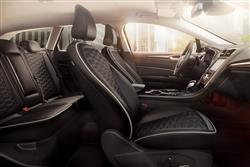 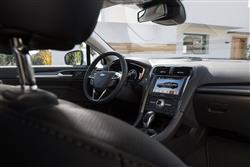