Ford's Mustang Mach-E should recharge customer interest in the upper part of the family EV segment. Jonathan Crouch drives it

Electric cars are often rather dull. But this one, Ford's Mustang Mach-E, very definitely isn't. The use of that famous name - and the styling cues that go with it - has certainly divided opinion, but it's also inspired the Blue Oval brand to give this family-sized sporting SUV a charisma its obvious rivals lack. Plus if you go for the larger 'Extended Range' battery option, you'll get yourself an EV offering a very decent all-electric driving range too. It all sounds quite promising.

It's difficult to think of a much less environmentally-friendly automotive model line than that of the Ford Mustang. Yet this is the nameplate Ford has chosen for the all-electric cars it will make in the coming era, this being the first of them, the Mustang Mach-E. This sporting SUV model is, we're told, about fast, fun freedom and it aims to please a whole new generation of Mustang owners. The 'Mach' name was apparently inspired by the 'Mach 1' variant of the first generation Mustang and fits with the remit given to the car's creators, Ford's 'Team Edison', who were tasked with creating 'an EV with soul'. Is that what we've got here? You might wonder. After all, this model's supposedly all-new 'GE1' ('Global Electrified 1') platform is actually a revised version of the C2 chassis used in the brand's current Focus and Kuga models. But the product itself couldn't be more different from those conventional cars. As we're about to find out.

There's a bit more bite to the drive dynamics than is common in this class, with well-bridled body control and keen grip through the turns. All mainstream versions have a top speed limited to 111mph. And there's a single toggle switch for regenerative braking called 'One-Pedal Mode'. The line-up kicks off with two rear-driven models, one using the 'Standard Range' 75kWh battery (70kWh usable), which puts out 269PS and can take you up to 273 miles. The other uses an 'Extended Range' 98kWh (91kWh usable) battery pack, which ups power to 294PS and increases the car's potential driving distance between charges to 372 miles in rear-driven form. There are also two all-wheel drive versions, both using the bigger 'Extended Range' battery, which feature an electric motor at each end of the car, with torque applied independently to each axle. The standard 98kWh AWD model puts out 351PS, 565Nm of torque, will get you to 62mph in 6.2 seconds and has a 341 mile WLTP range. If you want more, there's a performance-orientated Mustang Mach-E GT model, which uses the larger battery and AWD, puts out 487PS and 830Nm of torque and makes 62mph from rest in just 4.1 seconds on the way to 124mph. That top version goes 304 miles between charges and comes with MagneRide adaptive damping. As with most EVs of this size, kerb weight is substantial, in this case between 1,993 and 2,218kgs depending on variant. Whatever your variant of choice, the Mach-E road experience is dependent quite a bit on your choice between the three drive modes Ford offers here - laid back 'Whisper' (with its super-light steering), all-out 'Untamed' (with its sharper throttle and rumbly propulsion sound) and the compromise 'Active' setting you'll probably use most of the time. There's also a '1-Pedal Drive' feature, which as on other rival EVs, ramps up the regenerative braking to the point where you hardly ever need to use the brake pedal. Recent changes include a towing upgrade for the 98kWh version - to 1.5-tonnes. Plus the standard fitment of Ford's 'Intelligent Automated Cruise Control 2.0' package, which can use information from the navigation system and forward-facing camera to automatically adjust vehicle speed not only according to speed limit signs but also to upcoming curves, turns and roundabouts.

In terms of size, this Mexican-built model is 4,712mm long, 1,881mm wide and 1,597mm high, which places it size-wise somewhere between a Jaguar I-PACE and a Mercedes EQC. Clever styling tricks mean it doesn't actually look that big on first acquaintance, but it is immediately recognisable as a Mustang, thanks to signature elements like its long, powerful bonnet, distinctive rear haunches, aggressive headlights and trademark tri-bar tail lamps. Neat design and engineering deliver surprising rear seat roominess and ample cargo space. There are no conventional door handles: just buttons that pop open the doors. It's possible to use your smartphone as an entry key: or you can use a keypad built into the B-pillar. Inside, there's an interior nothing like anything you'll have previously seen on a Ford, dominated by a Tesla-like portrait-style 15.5-inch centre free-standing infotainment touchscreen incorporating a lower rotary dial. This works using Ford's latest SYNC 4 operating system that is able to accept over-the-air updates and can quickly learn your preferences. There's also a further 10.2-inch screen in front of the steering wheel for all the main driving gauges. A floating, flip-up armrest doubles as a place to store purses or bags. Two adults can be comfortably accommodated in the back. And there's a 402-litre boot (extendable to 1,420-litres if you fold the rear bench). Plus there's a further 81-litre space beneath the bonnet, which is provided in the form of a drainable compartment which would be good for wet or muddy clothing or footwear.

The Mustang Mach-E's starting price point is pitched from around £51,000. Across the range, you'll be choosing between single-motor Rear Wheel Drive and twin-motor All-Wheel Drive formats; and, in either case, between two battery sizes, which we'll quote in terms of usable capacity. There's a 75kWh (70kWh usable) 'Standard range' pack with 288 cells offering 115kW High Powered Charging; or an 98kWh (91kWh usable) 'Extended Range' battery with 376 cells offering 150kW High Powered Charging. The range starting price we just quoted is for the entry-level rear-driven 'Select' 'Standard Range' 75kWh battery model, which will see your Mach-E put out 269PS. Most Mach-E customers though, choose their car with mid-range 'Premium' trim, which also gets you the bigger 98kWh (91kWh usable) 'Extended Range' battery pack. That comes with a power upgrade - to 294PS for the Rear-driven model, priced from just under £60,000; or to 351PS for the AWD model, which is priced at around £65,500. 'Premium'-spec gives you standard 19-inch alloy wheels, Adaptive LED headlamps with Glare-Free Auto High Beam, eight-way powered driver and passenger seats and red brake callipers combined with black exterior detailing. If you're set on AWD and the bigger battery pack, Ford also want you to consider the manically fast flagship GT model, which includes both paired to a considerably higher output - 487PS, along with more torque (860Nm) than any car the brand has ever sold in Europe. This top version costs just under £75,000. Across the range, core cabin features include an absolutely huge 15.5-inch Central Touch Screen, incorporating next-generation 'SYNC 4' media connectivity with an embedded 'FordPass Connect' modem, Connected Navigation and Natural Voice Search functionality. There's also wireless 'Apple CarPlay' and 'Android Auto' smartphone-mirroring - the sort of thing you still can't get in a Tesla.

As electric vehicle owners do 80% of their charging at home, Ford offers Mach-E buyers a 'Connected Wallbox' option which delivers up to five times the charging power of a typical domestic socket - meaning customers can add an estimated average range of 38 miles per charging hour, based on extended-range, rear-wheel drive configuration. The Ford Home Charge Cable, included with the vehicle, can add an estimated average range of nine miles per charging hour using a typical European domestic outlet. And when you're out and about? Well with peak charging power of 150kW, a Mustang Mach-E variant fitted with rear wheel drive and the 98kWh (91kWh usable) 'Extended Range' battery could add driving range of up to 57 miles within 10 minutes of charge time on a DC fast-charging station. At the same kind of DC public power point with a Standard Range 68kWh Mustang Mach-E, you could charge from 10 per cent to 80% in approximately 38 minutes. All Mach-E models come with ultra-rapid charging capabilities courtesy of a Type 2 CCS inlet: the extended range models can charge at up to 150kW, while the standard range battery charges at up to 115kW. Whatever your choice of variant, the car's connected navigation system will identify up-to-date public charging locations during trips and prompt owners to charge at the most convenient points on each drive - all to help ensure they don't have to be anxious about how much range they have. The brand also gives customers access to the FordPass Charging Network, Europe's largest network of more than 200,000 public charging stations in 21 countries. A Mach-E owner will be able to access any of these and pay for their power from a single account.

At the first-ever Detroit auto show, Henry Ford said he was working on something that would 'strike like forked lightning': that was the Model T. With the Mustang Mach-E, Ford aims once again to 'strike like forked lightning', this time with a more interesting, charismatic interpretation of what a family-sized full-electric car can be. The coming years will bring us dozens of new electric vehicles but most will be sensible, worthy and rather boring. This car - and the various electrified Mustang family models that'll follow it - offers something more appealing and charismatic in a way that we think may well strike a real customer chord. Just perhaps, as the original Mustang sports car did back in the Sixties. Who says lightning doesn't strike twice? 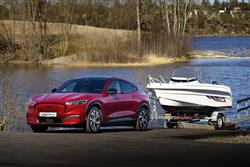 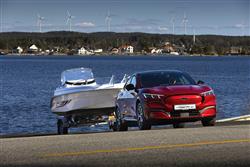 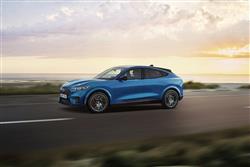 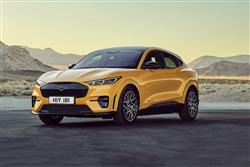 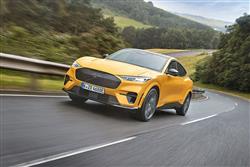 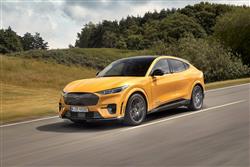