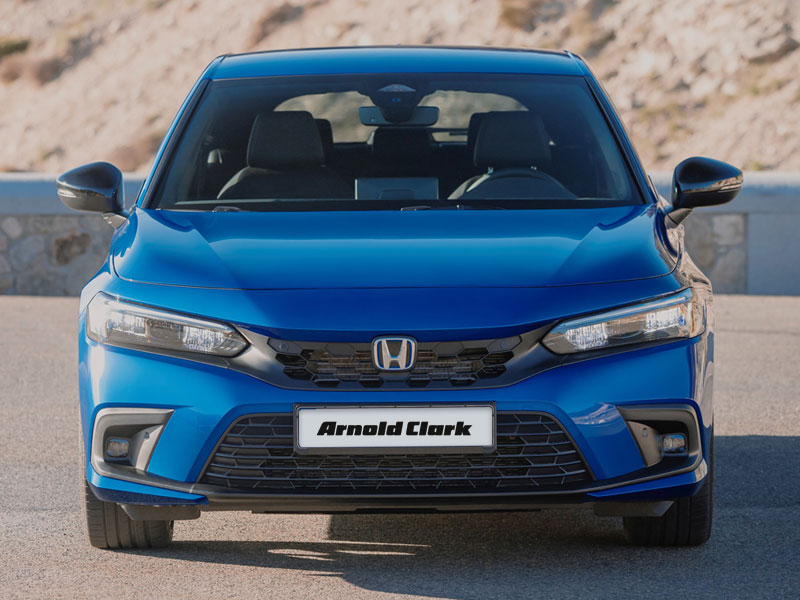 Available at Honda branches
From £29,095 Save £500 on current list price
£750 Deposit
£399 Per month
Available to pre-order
Enquire now
WhatsApp

This eleventh generation Honda Civic switches to e:HEV full-Hybrid power in its mainstream form - and adopts a lower key look. It's slightly larger than its direct family hatch rivals and delivers everything its brand knows about petrol/electric technology. Which turns out to be quite a lot.

The Honda Civic, one of the global motor industry's most enduring model lines, has moved on. It's no longer built in Swindon. And mainstream versions of this eleventh generation version no longer use a conventional engine, instead adopting a 2.0-litre e:HEV full-Hybrid petrol powerplant. There's been a return to the more mature look of earlier generation Civic designs too; gone are the slashes and fake vents of the old MK10 model. Instead, the replacement liftback 5-door hatch design adopts a more conservative, but still sophisticated look. This car completes the shift of Honda's entire model line to e:HEV Hybrid technology. Well, almost the entire model line anyway. The company, thankfully, couldn't quite bring itself to abandon the Civic Type-R hot hatch, so that continues with an evolved version of the previous model's 316bhp 2.0-litre turbo powertrain. But the Civic e:HEV is our focus here. Take a look before you sign up for the Toyota Corolla it's directly aimed at.

The Civic e:HEV is a curious confection: an EV - but not an EV. There's certainly an engine - a 2.0-litre normally aspirated petrol unit - but its main role is to generate energy for a little 1.05kWh lithium-ion battery that drives two electric motors. Unlike Toyota or Hyundai full-Hybrids, this one has no gearbox between the powertrain and the wheels. Instead, the e:HEV system itself shifts seamlessly between 'EV', 'Hybrid' and 'Engine' drive phases as you move along. 'EV' drive propels you from start off and at low speeds and 'Hybrid' drive cuts in when extra acceleration is called for. Only at steady high speeds does 'Engine' drive kick in, but that happens only briefly because as you approach top speed and the required drive energy becomes higher again, the system switches back into the 'Hybrid' phase to re-unleash the full output of the electric motors. Honda promotes this as a 'driver's Hybrid', based around the fact that a lot of the stuff you can't see was engineered around the high performance needs of the new 'FL5'-series generation Civic Type R hot hatch, a 315hp manual gearbox shopping rocket which is determinedly un-electrified and isn't our focus here. This Hybrid Civic is of course a very different kettle of fish but it's still decently rapid, making 62mph in around eight seconds if you engage 'Sport', the most urgent of the three provided drive modes. You might want to as well because unlike other Honda e:HEV models we've tried, this one actually responds to your right foot, instead of merely considering your request with infuriating slowness, as is the case with brand's Hybrid SUVs. Thanks to a stiffer chassis, a wider rear track and revisions to Honda's 'Agile Handling Assist' torque vectoring system, it goes round corners with surprising agility and we've appreciated Honda's re-tuning efforts with the more feelsome steering rack.

Clearly customers have told Honda that they want the Civic to look a little more conservative because that's what we've got here. The previous model's prominent rear wing disappears and this replacement car adopts a fastback style sloping silhouette across a rear hatch that's lighter and features smaller hinges for a cleaner roofline. Up-front, the A-pillars are set 2-inches further back than on the previous car and if you take a look in profile, you might notice that the wheelbase is 35mm longer. Inside, Honda has adopted the minimalistic and 'human centred' cabin design approach it pioneered with its current HR-V and Jazz e:HEV models. There's a honeycomb-style trim panel with integrated air vents which runs the width of the dashboard and the company has at last upgraded its infotainment set-up, with a much more sophisticated freestanding 9-inch centre screen which of course incorporates 'Apple CarPlay' and 'Android Auto' 'phone connectivity. Through the wheel, you view a 10.2-inch digital dial display. On the back seat, passengers get 1.4 inches more legroom than was possible before and there are larger side windows to increase the feeling of spaciousness, while the different rear hatch design improves headroom. Previous Civic models always had spacious boots and this one continues that trend: the 410-litre capacity isn't quite up to the level of a Kia Niro Hybrid, but it's way bigger than the 313-litres you get in a comparably-priced Toyota Corolla 2.0-litre Hybrid.

Expect your Civic e:HEV to start from just under the £30,000 mark. That's a little more than you'd pay for Toyota's rival Corolla Hybrid. Here though, there's just a single 5-door body style. Honda has no plans to re-introduce the estate model of the MK9 Civic generation. There won't be a return for the saloon body style of the MK10 design either. There are three trim levels to choose from - 'Elegance', 'Sport' and top 'Advance'. The flagship 'Advance' variant gets a 10.2-inch driver's display LCD panel and a BOSE 12-speaker audio system. All versions of this Civic get the latest version of Hondas 'SENSING' camera safety package. This gives you a 100-degree front wide view camera, enhanced recognition technology, blind spot information, low speed braking control and Lane keep assist. Infotainment and connectivity benefit from a much improved voice command system, the Honda 'Personal Assistant', first seen on the little Honda e. This is basically a next-generation voice control system in that it can respond to multiple commands: for instance "OK Honda, find me an Indian restaurant with WiFi and free parking". With this car, Honda is also offering the latest version of its Honda+ smartphone app, which includes remote vehicle locking and unlocking, plus 'intelligent geofencing', which alerts an owner if the vehicle breaches a pre-set 'geofence' zone. Plus there's the ability to send journey information from the app to the car's navigation system.

Honda's e:HEV technology has clearly progressed a lot in the short time since the HR-V e:HEV was launched. As you can see from the fact that this faster, larger-capacity 2.0-litre 181hp Civic e:HEV easily betters its smaller sibling's showing, in base 'Elegance' form recording a combined cycle figure of 60.1mpg and 108g/km of CO2. It's 56.5mpg for the 'Sport' and 'Advance' versions with their larger 18-inch wheels, variants which record 113 and 114g/km of CO2 respectively. Either way, that's in the same ballpark as this model's closest rival, the 2.0-litre Hybrid version of the Toyota Corolla (which manages bests of 57.6mpg and 111g/km of CO2). Basically, you're probably looking at the kind of real life running cost figures that you'd have got from the previous generation Civic diesel model. But without the kind of tax disincentives that apply to lap pump fuelled cars these days. Many customers will want to budget ahead for scheduled maintenance with fixed-price scheme called 'Five'. It includes five years' worth of maintenance, an extended warranty for this period and roadside assistance breakdown cover should the unexpected happen. This can be transferred to a new owner if you sell the car before the service plan has expired. The three year 90,000 mile warranty is better than the package you get from many competitors too. In addition, surface corrosion is covered for three years, exhaust corrosion is covered for five years, chassis corrosion is covered for ten years and structural corrosion for twelve years.

In half a century of Civic model line history, it's difficult to remember as much of a shift of emphasis as is evident with this eleventh generation design. It seems difficult to believe that this is the first Hybrid Civic hatch available in the UK - the sort of thing rivals Toyota have been offering for over a decade. Yet history suggests that when Honda does eventually catch up to a prevailing market trend, it does so in a way that introduces something new - something better. Which might just be what we have here. The Civic e:HEV feels like a slightly larger, more mature car than its direct rivals. It's priced at the kind of level that with quite a few other brands in the family hatchback sector would only get you relatively ineffectual mild hybrid technology (think Focus or Golf). It promises to be safer too. All of which might be enough to allow this MK11 Civic to reach out beyond its traditional customer base. But will that happen? It'll be interesting to see. 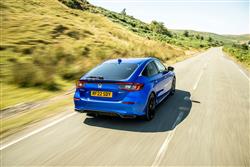 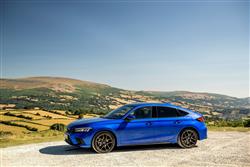 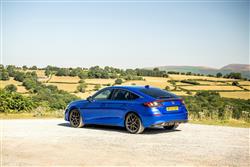 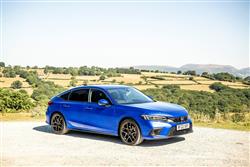 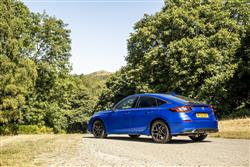 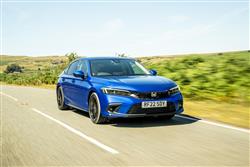