This new generation Honda HR-V is part of a new generation of far more efficient small SUVs. It's a self charging full-Hybrid with a fiendishly clever powertrain. And there's a sophisticated interior that retains the previous model's neat 'Magic' folding seats. In short, there's lots to like here. A large number of HR-V owners buy another and this MK3 model aims to keep them loyal.

It's taken some time for small SUVs to fully get on board with the current electrified automotive zeitgeist, but things are gradually changing. Take this car, Honda's third generation HR-V, now only available in 'e:HEV' hybrid form. Self-charging hybrid form that is. Honda doesn't seem to be bothering with petrol-powered Plug-in hybrids. Instead, it's devoted its attention to making ordinary full-Hybrids work as efficiently as possible. These being hybrids of the sort that can occasionally allow the car to run independently on full-electric power, rather than the rather ineffective Mild Hybrid powerplants you'll find in segment rivals like Ford Puma and the Kia's Stonic. Let's take a closer look.

This MK3 HR-V shares both its 'Global Small Car' platform and its 1.5-litre four-cylinder Hybrid petrol engine with the current Jazz supermini. As there, a pair of electric motors, based alongside the engine, are at lower speeds responsible for most of the propulsion, the petrol powerplant serving mostly as a generator. Only at high speeds does the engine take over, with an output of 131PS - slightly more than the Jazz because of the HR-V's larger size. The powertrain works in either of three selectable drive modes - 'Eco', 'Normal' and 'Sport' - all of which offer different levels of electric-combustion input. The powertrain itself automatically switches between three settings as you drive - 'Electric Drive', 'Hybrid Drive' and 'Engine Drive' - to maximise efficiency. When driving at a constant high-speed, such as on the highway, the system operates in 'Engine Drive' form, as that is most efficient for cruising. If further acceleration is required, such as when overtaking, the car will switch to 'Hybrid Drive' to gain the necessary extra performance boost. Despite a bigger battery pack than that used on the Jazz - 60 cells rather than 48 - the car can't drive very far in all-electric form. Instead, it's all about how efficiently the electric power can be provided - and then deployed for as much city driving as possible. There's 253Nm of torque and 62mph from rest takes 10.6s.

This third generation HR-V may closely match the dimensions of its predecessor but it looks significantly different. Slim LED headlights flank the redesigned front grille at the end of the long bonnet. Move to the side and a more rakish profile is emphasised by roof line 20mm lower than the previous model. Plus Honda has added a straight-edged shoulder line and raised the ride height by 10mm, while fitting larger 18-inch wheels. Inside, the cabin's been designed to maximise the feeling of spaciousness, aided by the adoption of the same minimalist design language first used in the little Honda e. The dashboard incorporates a 9-inch centre touchscreen and a 7-inch TFT display in the instrument cluster. Interestingly, in place of traditional dashboard air vents, there are instead two L-shaped outlets by the A-pillars - Honda's 'Air Diffusion System' - which directs air down the inside of the windows and provides a curtain of air to cool or warm passengers. We were pleased to see that the brand has retained its 'Magic Seat' system at the rear, which allows the seat bases to flip up like cinema chairs. The compactness of the new hybrid drivetrain has released an extra 35mm of legroom at the back and the backrests recline by an extra 2-degrees. There's a decently-sized boot too: Honda says that two adult mountain bikes could be carried if their front wheels were removed.

Prices start from around £27,000 for the entry-level 'Elegance' variant. You'll need a further £2,200 or so to get the mid-range 'Advance' version, while the plushest 'Advance Style' derivative costs just under £32,000. Standard features fitted across the range include LED headlights, heated front seats, 18-inch alloy wheels and media connectivity through a 9-inch centre dash touchscreen with 'Apple CarPlay' and 'Android Auto' smartphone-mirroring. The mid-range 'Advance' variant adds a powered tailgate with hands-free access, a heated steering wheel and upgraded synthetic leather and fabric interior trim. With the top 'Advance Style' derivative, you get a premium audio system, a 2-tone exterior paint finish and orange detailing in the cabin. Infotainment and connectivity benefit from a much improved voice command system, the Honda 'Personal Assistant', first seen on the little Honda e. This is basically a next-generation voice control system in that it can respond to multiple commands: for instance "OK Honda, find me an Indian restaurant with WiFi and free parking". All variants are equipped with the 'Honda Sensing' package of safety technology and driver aids. Plus there's Hill Descent Control that'll help you on steep slopes and low grip surfaces. With this car, Honda is also offering the latest version of its Honda+ smartphone app, which includes remote vehicle locking and unlocking, plus 'intelligent geofencing', which alerts an owner if the vehicle breaches a pre-set 'geofence' zone. Plus there's the ability to send journey information from the app to the car's navigation system.

You'd hope that with all that hybrid technology on board, this HR-V would be a frugal thing and, by and large, it is. The standard model has claimed WLTP-rated combined cycle economy and emissions figures of 52.3mpg and 122g/km. That's pretty impressive, even if it is some way away from the figures you'd get from Honda's Jazz supermini with basically the same powerplant (62.8mpg and 102g/km); such are the downsides that come with the greater weight and inferior aerodynamics of a crossover. Many customers will want to budget ahead for scheduled maintenance with fixed-price scheme called 'Five'. It includes five years' worth of maintenance, an extended warranty for this period and roadside assistance breakdown cover should the unexpected happen. This can be transferred to a new owner if you sell the car before the service plan has expired. Residual values are expected to be significantly better than most other small SUV segment rivals. And the three year 90,000 mile warranty is better than the package you get from many competitors too. In addition, surface corrosion is covered for three years, exhaust corrosion is covered for five years, chassis corrosion is covered for ten years and structural corrosion for twelve years.

This MK3 HR-V has a level of sophistication that makes both its predecessor and most current small SUV rivals look rather old-fashioned. But you pay a price for that; it'll be interesting to see how many segment customers are prepared to front up for that. Those that are will get themselves one of the most advanced and practical small crossovers on the market. With something old (the clever rear 'Magic' seats) and quite a lot that's new (the Hybrid powertrain and the minimalist dash). After trying this car, you might decide that buying into this level of tech is worth a bit more spend. And/or makes more sense than choosing an SUV of this kind with a premium badge. And if that's your conclusion, we wouldn't argue. 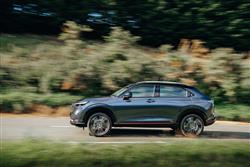 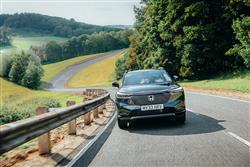 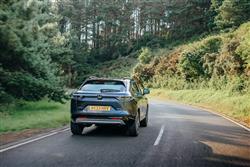 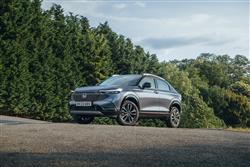 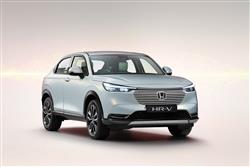 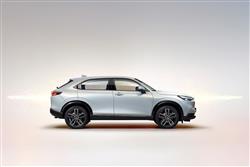