Hyundai has almost fully electrified the engine line-up used with its fourth generation Tucson mid-sized SUV, but you'll need a full-Hybrid powerplant of some kind to see a real efficiency benefit. Probably the one used in this front-driven Hybrid HEV variant.

For some time now, the established brands have been unable to ignore Hyundai - and they certainly won't be able to ignore this fifth generation version of its Tucson mid-sized SUV. The Tucson has yet to break into the top five sellers in its class, where cars like Nissan's Qashqai, Volkswagen Tiguan and Ford's Kuga tend to dominate, and it isn't going to unless it dresses itself in a form that's going to make people really sit up and take notice. Well this 'NX4'-series MK4 model certainly does that. This fourth generation model offers a token conventionally powered unit at the foot of the range, but otherwise everything on offer is in some way electrified: mild hybrid, full hybrid, plug-in hybrid - take your pick. It's the full-Hybrid HEV version we try here.

For electrified engine technology that'll really make a difference to your Tucson, you'll need some sort of full-Hybrid powertrain, your options for that beginning with the 2WD-only HEV Hybrid model we look at here. With this variant, a 'Prius'-style self-charging petrol/electric engine working with a 6-speed auto gearbox is mated to a 60PS electric motor powered by a 1.49kWh battery, which provides sufficient extra urge to this powertrain's combined power output to 230PS. Enough to deliver a 62mph sprint stat of 8s and a top speed of 120mph. Although the battery on offer in a Tucson HEV isn't very big, it's very good at constantly replenishing itself with regenerative energy, so that much of the time in town travel, you'll be able to cruise through the urban sprawl in a dignified silence. You can leave the powertrain to do its own thing, or use the centre console HEV/EV button to make your own choice between full-Hybrid or full-Electric motion - though the latter won't last for very long. You might not be quite so impressed out of town. The self-charging full-Hybrid system adds 73kgs of weight, enough to see a well equipped Tucson HEV model tipping the scales at nearly 1.7-tonnes. Combining that with the electric motor's relatively feeble output can only have only one result: a frequent propensity for the 1.6 T-GDi petrol unit to kick in (sometimes quite vocally) virtually all the time in usual driving. Once it has, should there be a need for more urgent forward thrust, then a prod of the throttle is accompanied by a pleasing initial stab of electrified torque, but this doesn't last for long because torque is more restricted than it would be with a comparably-powerful diesel-engined rival.

There's little to differentiate this HEV Hybrid Tucson variant from other derivatives in the range. This fourth generation 'NX4'-series model, based on the previous Vision T concept, has represented what Hyundai calls 'a design revolution'. Even Hyundai's European exterior Design Chief Eduardo Ramires admits it's 'quite brave'. 'We felt free to innovate' he says, hence the bold grille with its 'Parametric Hidden Lights'. This designates the way that the LED headlamps and the 'jewel-like' running lights are integrated into the sides of the 3D grille and can't be distinguished from it when switched off. This MK4 model is bigger than any previous generation Tucson too, at 4.5-metres long. Complementing that are big wheels of between 17 to 19-inches in size. Inside up-front, to suit the current trend, most of the physical controls have been removed in favour of two screens, both 10.25-inches in size. One is for the instrument cluster; the other is for the centre stack and incorporates Hyundai's latest Bluelink telematics. There's decent space on the back seat - and lots of headroom. The boot is hardly compromised at all in this HEV form, with a 616-litre capacity that's just 4-litres less than the base un-electrified 1.6 T-GDi model. The MHEV Mild Hybrid variant, in contrast, only offers 577-litres and the Plug-in version is 558-litres.

From launch, the full-Hybrid version of this mid-sized SUV was priced in the £32,500 to £37,500 bracket, offered only in front-driven form and available across five trim levels - 'SE Connect', 'N Line', 'N Line S', 'Premium' and top 'Ultimate'. This model's two key rivals are Honda's CR-V and Toyota's RAV4: those two models these days only come in self-charging full-Hybrid form. All Tucson HEV models include lots of kit. Tick off roof rails, auto headlamps and wipers, LED tail lights, cruise control, Hyundai's 'Drive Mode Select' drive mode system, rear parking sensors, rear privacy glass and an alarm. Plus a wide range of camera safety features too. Standard cabin items include a rear view camera and dual zone climate control, plus you can also tick off an auto-dimming rear view mirror and powered lumbar support for the driver's seat. Along of course with plenty of media tech. The standard GPS system works on a 10.25-inch 'Touchscreen Satellite Navigation' display screen that includes Hyundai's Mapcare and 'LIVE' traffic services. In addition, there's the usual 'Apple CarPlay' and 'Android Auto' smartphone-mirroring features; a DAB audio system with a couple of front and rear speakers, plus two tweeters; and a 'Bluelink' connectivity section, offering a calendar, weather info and a vehicle diagnostics menu. Through the leather-stitched multi-function steering wheel, you view a 'Supervision Instrument Cluster Screen', also 10.25-inch in size, that can be customised with individual drive mode layouts and various informational features. Features specific to the base 'SE Connect'-grade of trim include 17-inch alloy wheels and Halogen projector headlamps.

The efficiency figures reveal that Hyundai's MHEV mild hybrid tech gives you hardly any benefit over the standard version of the brand's 1.6 TGDi petrol engine. It all merely illustrates what we've been saying for some time, which is that mild hybrid tech doesn't really have much to offer the modern motorist. To start seeing more of an efficiency benefit, you'll need a full-Hybrid engine - one that is able to run independently on battery power. The HEV self-charging unit fitted to the Hybrid petrol model can certainly do that. Though not for very long, thanks to the combination of a near-1.7-tonne kerb weight, a relatively feeble 60PS electric motor and the small size of the 1.49kWh lithium-ion polymer battery pack that powers it. Still, this front-driven HEV model's efficiency showing - 49.6mpg combined and 127g/km of CO2 - is much better than you'd get from a diesel rival, even a more feebly-powered one. A Volkswagen Tiguan 2.0 TDI DSG model with just 150PS for instance (80PS less than a Tucson HEV), manages up to 46.3mpg and a smoky 160g/km - with a higher tax exposure, running on pricier fuel. These days, unless you're planning to tow with your mid-sized SUV, it's really hard to make a case for choosing a diesel with it - and those figures clearly illustrate just why. With a full-Hybrid engine, it's all good.

Hyundai still has to work out a way to make all Tucson variants - including this one - ride and handle with the polish common to the best of this car's mid-sized SUV rivals. The marque also needs more of a brand identity, though with future models all now slated, like this one, to carry a more distinct and individual personality, it seems likely that the days when people primarily chose a Hyundai merely on the basis of price and value will soon be behind us. And if you're looking for efficiency, then this HEV Hybrid model has far more to offer than its MHEV Mild Hybrid range stablemate. Overall, there's no doubt that this Korean maker has turned quite a corner here - a switch from delivering the kind of mid-sized SUV you might need to providing one you might genuinely really want. Which of course, as every modern brand knows, makes all the difference in the world in such an over-crowded segment. The Tucson model line needed a bit of a spark to really ignite its appeal. Well that's been delivered here - in every sense. 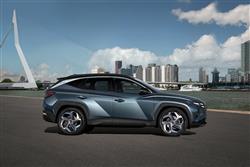 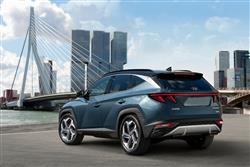 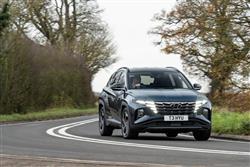 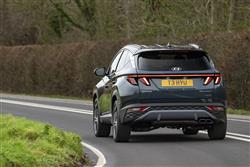 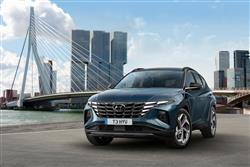 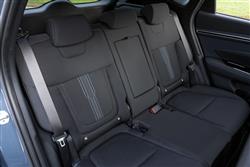