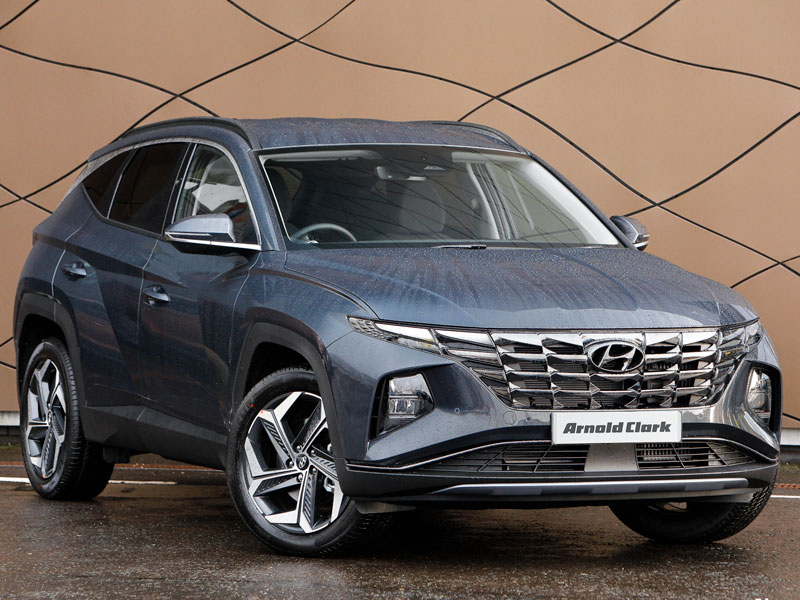 Available at Hyundai branches
From £39,100 Save £580 on current list price
£5000 Deposit
£425 Per month
Finance your car with PCP
Available to pre-order
Enquire now
WhatsApp

Hyundai's Tucson Plug-in Hybrid is hardly inexpensive, but you get a lot in return. Jonathan Crouch drives it.

Hyundai's mid-sized SUV, the Tucson, looks more sophisticated in fourth generation form - and certainly is beneath the bonnet. Especially in this Plug-in Hybrid form, which can go up to 38 miles on a single charge and, unlike some rivals, includes four wheel drive, so you'll be well set in the Winter. If you're looking for a PHEV crossover of this kind, it's a car you can't afford to ignore.

Hyundai has pushed its Tucson mid-sized SUV further up-market in this model's fourth generation. Which means the need for more technology; like the plug-in hybrid powertrain used in the flagship model we're going to look at here. It completes what Hyundai claims is the widest range of powertrains available from any model in this class. Well, there's no full-EV variant - the brand doesn't need to provide that as it has its latest IONIQ 5 offering a full-battery option in the Crossover class. But you can certainly have just about everything else in a Tucson; anything else petrol-powered anyway. Hyundai doesn't do diesels in SUVs any more. What you can have with mainstream Tucsons is a choice of 1.6 T-GDi petrol variants; a conventional un-electrified option; or a version with MHEV mild hybrid tech; or one with full-Hybrid HEV tech that can run independently on full-battery power, though only for short periods. This PHEV Plug-in version though, can be battery-sustained for far longer. Let's take a look.

All Tucsons these days are powered by a 1.6-litre T-GDi petrol engine wedded to some form of electrification - and this one's no exception. In this case, the turbocharged combustion unit is mated to a 91PS electric motor powered by a 13.8kWh battery which, when fully charged, can take you up to 31 miles before the engine cuts in. Drive is sent to all four wheels - unlike some obvious rivals, the Ford Kuga PHEV and Hybrid versions of the Vauxhall Grandland and the Citroen C5 Aircross for instance, which are 2WD-only. And it's all marshalled via an 8-speed auto gearbox with proper cogs, unlike the belt-driven CVT transmission you have to have in rival Toyota RAV4 Plug-in and Suzuki Across models in this class. Typical customers are unlikely to ever want to take this car off road, but should the need for extra 'off piste' traction ever arise, there's a 'Terrain Mode' system which provides settings that vary power delivery to each axle according to the surface you're travelling over. On tarmac, a combined 265PS output gives sprightly performance, despite this PHEV's prodigious 1.9-tonne kerb weight; 62mph from rest takes 8.6s en route to 120mph and the stab of electric torque you get when you put your foot down makes it feel faster, particularly when you activate the provided 'Sport' setting.

Aside from altered badging and the addition of an extra charging flap, there aren't really any significant visual differences to mark this Plug-in Hybrid Tucson variant apart from its less electrified showroom stablemates. Still, in all its forms, the fourth generation 'NX4'-series version of this design has enough about it to set High Street tongues wagging. It's based on the brand's previous 'Vision T' concept and represents what Hyundai calls 'a design revolution'. Even Hyundai's European exterior Design Chief Eduardo Ramires admits it's 'quite brave'. 'We felt free to innovate' he says, hence the bold grille with its 'Parametric Hidden Lights'. This designates the way that the LED headlamps and the 'jewel-like' running lights are integrated into the sides of the 3D grille and can't be distinguished from it when switched off. Complementing that are big 19-inch wheels. Inside up-front, to suit the current trend, most of the physical controls have been removed in favour of two screens, both 10.25-inches in size. One is for the instrument cluster; the other is for the centre stack and incorporates Hyundai's latest Bluelink telematics. The PHEV powertrain doesn't impinge on rear seat space - there's just about enough room for three on the rear bench. But it does affect boot capacity, which falls from 620-litres with a conventional model to 558-litres here. Push forward the split-folding rear bench and you can extend that to 1,737-litres.

The Plug-in Hybrid version of this Tucson comes in all the usual Tucson trim options, bar entry-level 'SE Connect'. That means prices starting at just over £39,000 for either the 'Premium'-spec model or the alternative sportier-looking 'N Line' variant. That's a figure which represents a premium of just under £5,000 over the alternative full-Hybrid HEV variant - and almost £7,000 over the MHEV mild hybrid model. So you've really got to want plug-in tech, especially if you're to stretch to one of the plusher trim levels - there's a choice of 'N Line S' or a top 'Ultimate' trim level that could set you back as much as around £42,000. Still, across the range, you do at least get plenty of kit for your outlay. The twin 10.25-inch interior screens are one example of that, the central infotainment monitor not only including 'Android Auto' and 'Apple CarPlay' connectivity but also Google and Apple calendar integration, along with selectable user profiles. And of course there are up-to-the-minute driver assistance safety features, including the company's latest 'Highway Drive Assist' semi-autonomous capability. This can brake and accelerate the Tucson to keep it a pre-set distance from other motorists, using a 'Lane Follow Assist' system to keep the car in lane on major roads. At the top of the range, there's even a 'Remote Smart Parking Assist' feature, allowing the car to be summoned from a parking spot via a button on the key.

If you're comparing the Plug-in Hybrid Tucson with its HEV self-charging Hybrid showroom stablemate, you'll find that this Plug-in variant's provision of a larger 91PS electric motor powered by a considerably larger 13.8kWh battery makes all the difference. It facilitates the usual PHEV three-figure combined economy reading - think in terms of around 180mpg. And an enviro-conscious CO2 figure of 31g/km. Which in turn makes possible a super-low Benefit-in-Kind taxation rating of just 10%; with the HEV, it'd be around 29%, depending on trim. The WLTP combined economy figure is 201.8mpg. A Tucson Plug-in Hybrid owner qualifies for a low VED tax band B, so there'll also be no VED road tax to pay in year one (the self-charging HEV models are in VED bands H or I). Servicing is every 10,000 miles. And insurance is rated at group 21E. Let's finish with charging time figures. This model has a 7.2kW on board charger and can be charged from a 3-pin ICCB supply in 6 hours and 30 minutes (empty to 95%). Use the kind of 7kW wallbox you'd obviously install at home if you were to choose a Plug-in Hybrid and that time drops to 1 hour and 42 minutes. When fully replenished, the battery can take you up to 38 miles on a single charge. A strong buying incentive, as usual with Hyundai, is the five year unlimited mileage warranty that comes as standard. It's backed up by breakdown cover that last the same length of time and free annual vehicle health checks over this duration. True, rival brand Kia claims to better this package by offering a similar seven year deal, but there, you're limited to 100,000 miles.

As usual, Hyundai has taken established technology and made it available slightly more affordably. What's different with this Tucson Plug-in Hybrid though, is that the packaging makes the end confection genuinely desirable. There's real pavement presence here - and the neighbours will take a second glance over the fence. No previous Tucson was ever like this. No previous Tucson ever delivered a three-figure fuel return or a sub-35g/km CO2 reading either. In short, there are plenty of ways that this top version of the fourth generation model will surprise you. Unfortunately, pin-sharp involving driving dynamics don't number amongst these. There's nothing particularly rewarding about driving this car, but then you can't really say that about any of its direct rivals either. Also common with the competition is the kind of premium pricing that will have a potential Tucson Plug-in Hybrid customer wondering whether he or she might not be equally happy with the more affordable HEV Hybrid or MHEV Mild Hybrid models further down the range that can't be plugged in. If you want cutting-edge technology to match this fourth generation Tucson's cutting-edge looks though, this PHEV variant has, as Hyundai puts it, 'the power to surprise'. 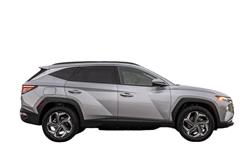 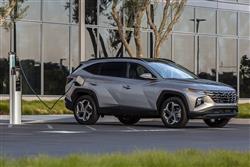 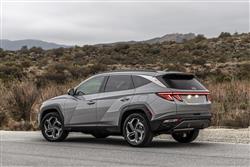 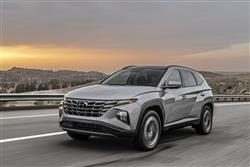 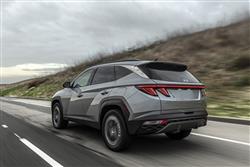 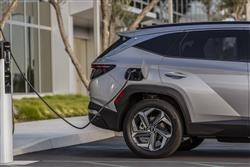