It's hard to think of a much more inoffensive car than a Kia Ceed, so in order to inject a shot of charisma, Kia has developed the warmed-over GT version. In this guise, we get the usual host of go-faster styling addenda and a useful 204PS turbocharged engine with 265Nm of torque. It's a bit off-pace when it comes to fuel economy but it's absolutely packed with standard equipment for the money.

The ingredients certainly sound beguiling. A handsome five-door family hatch with sporty styling that sends over 200PS to its front wheels. Suspension fettled in Europe, deeply-bolstered sports seats, a seven-year warranty and a price tag not too far over the £25,000 mark. That's the sort of thing many new car buyers have been wanting for some time, but few manufacturer are able to deliver. Well now you can buy such a car; the Kia Ceed GT. The Ceed is one of those cars you see everywhere but probably don't register. It's sold extremely well since being introduced back in 2007, with a second generation model fast-tracked into existence in 2012 and a MK3 model announced in 2018. Kia is looking to reduce the anonymity of the Ceed with this GT model. It's undeniably good-looking but is it a model that can go head to head with the better cars in its class?

The Ceed GT is built of the right stuff. Even the entry-level Ceed comes as standard with a slick multi-link rear suspension rather than the usual cheap torsion beam rear ends that Volkswagen, for example, will fit to its base Golfs. The steering's got a decent amount of heft to it by modern standards and the control weights are nicely calibrated. To this, the Ceed GT adds quite a bit of engine. The 204PS (or 201bhp if you prefer) turbocharged four-cylinder 1.6-litre T-Gdi petrol powerplant cranks out a chunky 265Nm of torque, which seems right on the money. There's a paddleshift auto DCT gearbox option this time round too. The sprinting figure of 7.2 seconds to 60mph isn't slow, but neither is it enough to have you hyperventilating at the next set of lights. It delivers a useful 265Nm slug of pulling power at just 1,750rpm and there's a maximum speed of 143mph. This performance hatchback sits 5mm lower than the standard Ceed and Ceed Sportswagon, reducing the centre of gravity. Stiffer front and rear springs reduce body roll, improve responses to steering inputs, and aim to give the car a firmer, more assured ride in all conditions. Furthermore, softer front and rear anti-roll bars ensure the inside tyre remains in contact with the road under heavy cornering, enhancing traction and grip. These changes to the suspension enable GT drivers to enjoy faster cornering speeds than they might in a number of more powerful front-wheel drive 'hot hatches'.

The styling of the Ceed GT suggests that it's going to offer the keen driver a little more than it can possibly deliver. Still, we're struggling to think of many better-looking cars in its class. At the front, there's a sportier bumper design, incorporating larger air intakes and gloss black trim along the base. The standard 18-inch aluminium alloy wheels feature a castellated centre cap finished in red, and house red brake calipers. A small roof spoiler helps channel air cleanly off the top of the car. Drop inside and it's as if Kia has raided the big book of how to remind people they've chosen the sporty option. You'll get no complaints from us about the excellent Recaro sports seats finished in part leather, part manmade suede, but we could probably do without the red stitching everywhere. A black roofliner, enveloping and cocooning occupants, replaces the grey cloth found in standard Ceed models. Every GT model features a D-shaped steering wheel bearing the 'GT' logo, as well as aluminium driver pedals. Models equipped with Kia's double-clutch transmission feature new metal alloy shift paddles behind the steering wheel. The gloss black bits look good and there's little faulting the car's basic practicality, with five doors, respectable rear legroom and a 395-litre boot. If you need more room, there's a ProCeed estate version.

Kia offers only a manual version of this hot hatch. Plus you can get the same drivetrain in the ProCeed 'shooting brake'-like stylised estate version of this model. Prices for the five-door hatch start from not too far over the £25,000 mark. Standard kit includes an 8.0-inch touchscreen satellite navigation system, with navigation and Kia Connected Services powered by TomTom. The system enables full smartphone integration with Apple CarPlay and Android Auto. Plus through it you can access a powerful JBL Premium sound system with Clari-Fi music restoration technology. A wireless smartphone charger, plus heated front and rear seats are also included. Standard camera-driven safety technologies include High Beam Assist, Driver Attention Warning, Lane Keeping Assist with Forward Collision-Avoidance Assist. Lane Following Assist is also included and detects road markings to keep the car in its lane on the motorway. The system controls acceleration, braking and steering, using radar sensors to maintain a safe distance from the vehicle in front. Additional available technologies include Smart Cruise Control with Stop & Go, Blind Spot Collision Warning, Rear Cross-Traffic Collision Warning, Smart Parking Assist, and pedestrian recognition for the Forward Collision-Avoidance Assist system.

The previous Ceed GT's old-tech GDi engine struggled to produce decent efficiency readings, but this improved T-GDi unit does a little better - though its figures are still hardly stellar. Expect 38.2mpg on the combined cycle and 155g/km of CO2. Naturally, you'll claw some of that back with the healthy resale value that's virtually guaranteed by the excellent seven-year warranty. Fixed price servicing is on offer but do bear in mind that Kia quotes a 10,000 mile/1 year service interval for this car. As usual with a Kia, you can budget ahead with pre-paid servicing plans, courtesy of the brand's 'Care-3' package that offers a fixed price deal covering your first three garage visits, a package that can be extended to include five visits if you go for the upgraded 'Care-3 Plus' option. In addition, a customer can now purchase services up to and including the seventh one, so matching the full length of the warranty. An even stronger buying incentive is much-trumpeted 7 year / 100,000 warranty which, like the 'Care-3' servicing packages, is transferrable to future owners. However, it is worth pointing out that the warranty only offers unlimited mileage for the first three years you own the car; thereafter, you'll have a 100,000 mileage restriction.

There's a lot to like about the Kia Ceed GT. It's a lovely-looking thing and it's absolutely rammed to the gunwales with standard equipment. The pricing is keen, the fit and finish is good, the seven-year warranty is a major attraction and the thought of a 204PS turbocharged engine in a Kia always raises a smile. Kia has priced and positioned this car carefully and with some skill. As a consequence, identifying direct rivals isn't easy. You either settle for something less powerful and less overtly sporting or you pay a lot more for a rival that's less well-equipped but which is quicker. That sweet spot of value, pace and specification is one that Kia could well make its own. No, this car isn't perfect. It ought to be a bit quicker and it should be more economical, but there's so much that's right about this package that it's possible to overlook those shortcomings. Kia's star has been on the rise for some time now. The Ceed GT isn't about to change that. 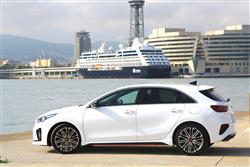 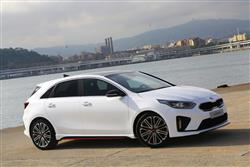 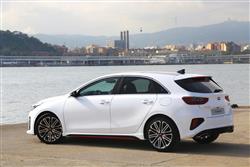 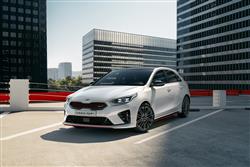 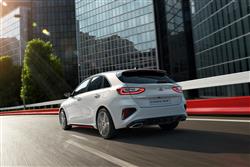 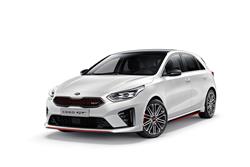