The Mercedes GLE can be had in a very sensible form indeed. Jonathan Crouch takes a look at the 350 de plug-in variant.

The second generation Mercedes GLE makes most sense in this four cylinder 2.0-litre diesel/electric 350 de plug-in form. A much larger battery than you'd expect a PHEV model to have means a far longer all-electric driving range than any Plug-in car has previously offered. Sounds promising.

The second generation version of Mercedes' GLE took a big step forward, but it's still a 2.2-tonne leviathan. Could a large SUV like this really ever make sense for someone with one eye on the environment? Someone wanting a combination of performance and low running costs? Surprisingly, the answer is yes, or at least it is in the case of the variant we're looking at here, the clever GLE 350 de PHEV plug-in diesel-/electric model. It specifically takes on plug-in versions of BMW's X5, Porsche's Cayenne and Volvo's XC90, but those are all petrol-powered and they've got nothing like the electric driving range of this Mercedes. Let's take a closer look.

A little unusually, this is a diesel-based PHEV, using a 194hp version of the ordinary 300d model's 2.0-litre unit. The electrified element is taken care of by a 100kW electric motor able to take the car to a battery-powered top speed of 100mph. This rises to 130mph when the engine joins in, at which point 62mph from rest is achievable in only 6.8s. Of course, pushing on like that isn't going to help this PHEV model's potential NEDC-rated all-electric driving range, rated up at 66 miles thanks to the use of a lithium-ion battery that's one of the biggest we've ever seen in a plug-in model - 31.2kWh in capacity. The transmission here is the same nine-speed 9G-TRONIC automatic gearbox used across the rest of the range, which in the GLE works as seamlessly as it does in the many other Mercedes models in which we've tried it. Change times of that paddleshift auto 'box are one of the things influenced by the standard 'DYNAMIC SELECT' driving modes system - the others being throttle response, steering feedback and suspension feel. This set-up, accessible via a rocker switch on the centre console, doesn't unfortunately provide an auto' or 'adaptive'-style mode to make all the drive set-up decisions for you, but as usual, there is an 'Individual' setting allowing you to programme in your own parameters.

You expect a contender of this kind to make a big pavement statement - and of course this second generation GLE model does, courtesy of its larger dimensions and imposing front end. That's embellished by the twin power domed bonnet flowing down into an upright radiator grille flanked by piercing 'LED High Performance' headlamps. Inside, we're served up an interior that in our view, sets a fresh benchmark for quality and sophistication. Some features are of course familiar from other large Mercedes models - primarily the distinctive widescreen cockpit layout with its twin 12.3-inch virtual displays, which can be activated by the provided 'Hey Mercedes' voice-activated functionality. And of course, there's an exemplary standard of fit, finish and materials quality, with a very high-end blend of leather, open-pore wood and aluminium accents. Second row seating is more spacious than was the case with previous GLE models. And there's a third row too, though the pews there are strictly for kids. Out back in a GLE 350de, with all the seats folded, there's up to 1,915-litres of luggage space. Which is only fractionally less than the ordinary models.

You'll need a budget of around £62,000 for a GLE 350 de plug-in. That's for base 'AMG Line' trim. There's also mid-range 'AMG Line Premium' and top 'AMG Line Premium Plus' trim, the latter taking you up toewards the £70,000 mark. All versions come with a 9G-TRONIC 9-speed auto gearbox and a 7-seat cabin. Inside, where the upholstery is trimmed with soft nappa leather and the front seats are heated with lumbar support, an interior highlight is the 64-colour ambient lighting system which bathes the cabin with soft, soothing shades at night. You also get THERMOTRONIC climate control, a multi-function leather-stitched sports steering wheel, cruise control with a speed limiter and a reversing camera, Decor touches include anthracite open pore oak wood trim, a dash top stitched with ARTICO man-made leather, AMG floor mats and brushed stainless steel sports pedals. The real cabin talking point though, is the 'MBUX' ('Mercedes-Benz User eXperience') multimedia infotainment system, which is controlled by two 12.3-inch screens, one for the instrument cluster and another in the centre of the dash. The 'MBUX' system doesn't give you smartphone-mirroring as standard, but it does include hard-disc Navigation, a DAB radio, Bluetooth, voice activation and a 'Live Traffic Information' feature that's free for the first three years of ownership.

The electrified element of this GLE 350 de model's powertrain is provided by a 100kW electric motor activated by a lithium-ion battery that's one of the biggest we've ever seen in a plug-in model - 31.2kWh in capacity. This promises a WLTP-rated all-electric driving range of 61.5 miles (NEDC 66 miles) and that facilitates an overall CO2 figure of 29g/km. The NEDC combined cycle fuel reading is 256.8mpg. This would be our variant of choice in the range, provided you don't mind the fact that you'll need a fast charger for really quick plug-in turn-around times with a GLE 350 de; Mercedes talks of a 50kW DC public fast charger (of which there are over 1,000 around the UK) delivering a zero-to-80% rapid charge in about 30 minutes. From a wallbox, this car will take 90 minutes for a full charge, while from a conventional power socket, it will require about five hours. What else? Well, we'll tell you that the comprehensive three year warranty is built upon by Mercedes' Mobilo scheme which delivers breakdown cover for up to thirty years, as long as you continue to have your car serviced at a Mercedes main dealer. And it's worth knowing that your maintenance outlay can be kept a little in check by going for the optional Service Care package that takes care of routine maintenance, spreading the cost of regular servicing, guaranteeing the price of parts and labour for up to four services and covering the cost of all recommended service items such as brake fluid, spark plugs, air filters, fuel filters and screen wash.

Ultimately, the Stuttgart brand builds more SUVs than anyone else and there's a reason why globally, the GLE is the most popular model of that kind that the company makes. It's true that there are sportier, more dynamic models of this kind you could buy. But we're struggling to think of many that offer a better all-round package. Especially in the case of this GLE 350 de plug-in variant. Capable, practical and luxurious, it's our favourite version of the best mainstream large SUV we've yet seen from the Three-Pointed Star - by far. Mercedes is now at last fully credible in this segment. 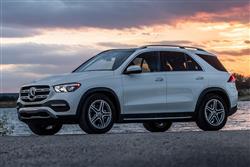 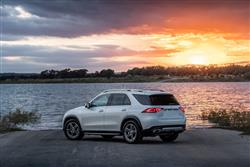 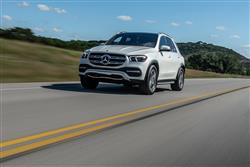 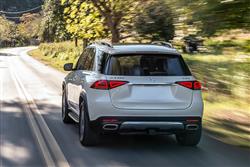 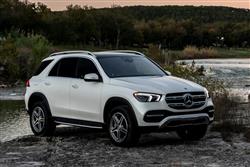 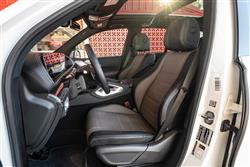