Available at Mercedes-Benz branches
From £84,180
£7999 deposit
£749 per month
Finance your car with PCP
Enquire now

The Mercedes SL has long been the definitive luxury sportscar. So can this improved sixth generation version deliver that concept afresh for the modern era? The experts at Car & Driving check it out.

Luxury sportscar buyers traditionally sold on the charms of a Mercedes SL will certainly be sold on this significantly revised sixth generation version, now improved with more powerful engines, a 9-speed auto gearbox, a 'Dynamic Select' drive dynamics system and Active Body Control. They'll like the lithe proportions and smarter styling - and the luxurious technology. But there's so much more to this car than that. It is, in every respect, a landmark machine for its maker. As every SL should be.

There aren't many truly iconic cars in the modern motor industry - but this is one of them: the Mercedes SL. The fundamental thinking behind standard setters of this sort doesn't tend to alter very much, but here it's different. Over six generations spanning as many decades, everything has changed about this car - yet in many ways, nothing is different. For Three-Pointed Star buyers, it's still the ultimate expression of sporting opulence and remains perhaps the definitive face of this legendary luxury brand. Yet one that over more than sixty years has changed from supercar to sports roadster and from there through boulevard cruiser to autobahn bruiser. A design, in other words, that through its lifetime, has managed at different times and in different forms to define everything a sportscar should be. Here, we have the improved sixth generation version, a car that, like the 1952 original, properly lives up to its name. 'SL', after all, stands for 'Sport Leicht' and this car, like that one, is made almost entirely from lightweight aluminium. Only this way, Stuttgart seems to think, can a modern luxury sportscar makes sense in the modern era and meet the contradictory demands of smarter speed and frugal fuel returns. Are they right? We're going to find out.

A touch upon the silver starter button reveals a muted muffled roar from beneath the enormous bonnet that stretches out before you, tonally tuned by the size of the engine you've specified. Almost all are more powerful now. Perhaps the 367bhp 3.0-litre twin turbo V6 of the entry-level SL400. Or the 455bhp of the 4.7-litre twin-turbo V8 SL500. There are AMG options beyond this to try and snare the supercar set and act as stepping stones to the awesome SLS gullwing and roadster models: namely the 5.5-litre V8 of the SL63 AMG which can put out as much as 585bhp. Or if you really must, the 6.0-litre V12 of the SL65 AMG which, with 630bhp, is arguably the fastest thing Mercedes makes. The SL400 and SL500 models get a new 9G-TRONIC 9-speed auto gearbox but the AMG variants stay with a sharper AMG SPEEDSHIFT 7-speed set-up. Across the range, SL drivers benefit from 'Dynamic Select' adjustable damping, a set-up you can tweak via 'Eco', 'Comfort', 'Sport', 'Sport Plus' and 'Individual' modes to suit the mood you're in and the road you're on. Another option is 'Active Body Control' with a curve tilting function. This reduces body movement through the bends in a way that's almost eerie. These changes do much to make the SL a more involving driver's proposition. Dynamically, this car has always sat rather uneasily somewhere between a Porsche 911 Cabriolet and a BMW 6 Series, not as sharp as the 911, not as luxurious as the Six. With this improved sixth generation SL, the difference is fundamental. In this, we've a car arguably able to offer much of the best of both worlds.

Let's start with the fineries of fashion - classic SL proportions that have evolved through six generations and nearly half the history of this famous brand: the long bonnet, the compact passenger cell set well back within the wheelbase and a muscular, racy-looking tail. Changes to this improved MK6 model include a re-sculpted radiator grille that harmonises with the now standard AMG bodystyling. Two powerdomes on the bonnet invoke the sporting heritage of the SL, while light-catching contours give additional structure to the bonnet. Also adding to the revised appearance of this SL is the standard-fit LED Intelligent Light System with its headlamp housing extending far to the outside and an integrated torch-shaped unit comprising the daytime running lamp/position lamp and direction indicator. The side view of this SL reveals enlarged cosmetic air outlets with wing-like chrome inserts in the dynamic, broad vehicle wings. But it's what you can't see that's important here. 'SL' may stand for 'Sport Leicht' but historically, this model has always been something of a sporting heavy hitter. That changed when this sixth generation version first arrived in 2012 and the decision was made to construct the car entirely from aluminium. Of course, this car could have been a lot lighter still if the designers had dispensed with the bulky electrically operated Vario metal folding roof that only Mercedes now provides in this segment. It eats into boot space and makes it impossible for this car to offer the pair of occasional rear seats you'll find in competitors from Jaguar, BMW and Porsche but it's also one of the things that most appeals about this car to city-based buyers. The mechanism is still slower than a fabric hood would be but in this model has been speeded up to raise or lower the elaborate metal panels in a respectably rapid 20 seconds. And it can now be used at speeds of up to 25mph. When up, if you've specified what Mercedes calls 'MAGIC SKY CONTROL', you'll get a neat system that uses electro-reactive particles to switch the roof panel from light to dark at the press of a button.

As before, most standard SL models will be sold in the £75,000 to £85,000 bracket, but you'll need around £115,000 for the Mercedes-AMG SL63 version and around £175,000 for the SL65 AMG flagship variant. Pricing at the bottom end of the range isn't unreasonable for what you get. You'd expect to pay a premium, both for a metal-folding rather than a fabric roof - and for the legendary history and segment-leading hi-tech lightweight aluminium design and technology of this car. Especially as so many equipment features you might expect to have to pay extra for are included as standard. All models get the AMG Sports package that runs to 19-inch alloy wheels, lowered sports suspension with revised damper settings and AMG bodystyling. You also get adaptive dampers, a powered glass sunroof, Parktronic with Active Park Assist, a voice-activated HDD satellite navigation system and intelligent bi-xenon headlamps with auto-dipping full beam. That's in addition to a rosta that runs to 18-inch lightweight alloy wheels, metallic paint, heated leather seats, a multi-function sports steering wheel finished in Nappa leather and a COMMAND online infotainment system that, depending on the apps you load upon it, will be able to tell you anything from weather reports to car park locations - and even share prices. More conventionally, it allows acess to a 6-disc CD autochanger, an eight-speaker surround sound stereo and a Bluetooth interface. Plus of course, you get the Vario electric folding metal roof and (on SL400 and SL500 variants) the silky-smooth 9-speed 9G-TRONIC auto gearbox. There's now Apple Carplay connectivity as standard. And an optional 'Driving Assistance' package uses a stereo camera to deliver the latest safety electronics.

If you're thinking of buying this car, then you probably won't be worrying too much about its running costs - but Mercedes has. Efficiency comes courtesy of an aluminium structure, making this one of the lightest cars of its kind ever made as well as being one of the most aerodynamic, with a slippery Cd factor of just 0.27. Combine that with the benefits conferred by an adjustable radiator shutter, an eco-gearshift programme for the 9G-TRONIC transmission, intelligent alternator management and a start-stop system that cuts the engine when you don't need it, stuck in traffic or waiting at the lights, and you've the potential for efficiency improvements. Not bad, considering that across the improved sixth generation SL line-up, power and torque figures have increased. The result of all this efficient thinking is that the SL400 manages 36.7mpg on the combined cycle and a CO2 figure of 175g/km, scarcely believable figures from a 1.7-tonne luxury convertible sportscar capable of sixty in under six seconds. It's a variant I'd be very tempted by as it doesn't lose much in performance to the biturbo V8 SL500 yet is much more efficient to run. SL500 buyers are promised a combined cycle fuel return of 31.4mpg and a CO2 figure of 205g/km. Of course, you'll need slightly deeper pockets to run one of the AMG models and though the V8 SL63 AMG version's combined cycle 28.8mpg figure is better than I expected, the CO2 showing (up to 229g/km), though much better than before, is still nothing to write home about. Better though than the 23.7mpg and the 279g/km you'd get in the V12 SL65 AMG flagship model.

Like all Mercedes SLs, this improved sixth generation version is a special car. The range didn't really need more power but Mercedes has provided it anyway. More significant is the addition of Active Body Control and the more advanced 'Dynamic Select' adaptive damping system with its curve-tilting cleverness. For all that, this car still isn't really suited to a track - yet it's more than just a very grand GT, a combination that won't suit if your preferences lie at either of these extremes. For many though, this will be the perfect way to reward themselves for a lifetime's endeavour, a car that feels genuinely coupe-like with the roof up and roadster-ready, top-down. Nothing else in this segment manages that quite as well. Nothing else can offer the security of a hard-top folding roof and, rather surprisingly, nothing else comparable is either as well equipped or as efficient to run. All compelling reasons to support an expectation that this modern instalment in SL history will be as successful as its predecessors. This is then, an enduring but very modern take on luxury sportscar motoring. And every inch a Mercedes-Benz. 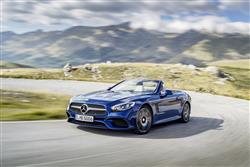 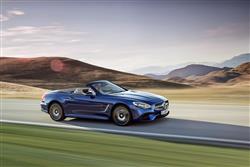 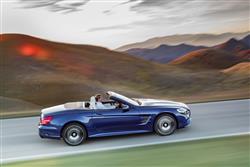 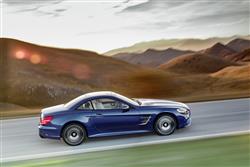 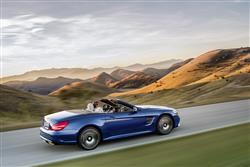 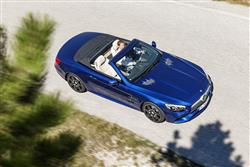