Available at Mercedes-Benz branches
From £37,129
£469 deposit
£469 per month
Finance your car with PCP
Enquire now

Having re-badged its compact roadster as the 'SLC', Mercedes is continuing to evolve it. Does it all add up into an appealing package? The experts at Car & Driving decide..

After two decades of selling its SLK model in the compact roadster segment, Mercedes re-launched the car in 2016 as the 'SLC', the name change acknowledging this model's traditionally close relationship with the brand's C-Class saloon, a car with which it shares most of its technology. Fresh additions to the model line-up have revitalised the range: the sporty top-of-the-line Mercedes-AMG SLC 43 variant for example - and the entry-level SLC 180 derivative. In visual terms, stand-out SLC features include the standard-fit diamond radiator grille and the optional LED Intelligent Light System.

The third generation SLK roadster proved moderately successful for Mercedes. Launched in 2011, it generally out-sold its key rival, Porsche's Boxster, two to one but that wasn't enough to satisfy the Stuttgart brand. Hence the move in 2016 to re-name and re-style the car, the 'SLC'-tag positioning it as the 'sporty' option for a Mercedes C-Class buyer wanting a roadster-style car for weekend or holiday use. Strip away the marketing flam though and to be frank, things are much as before. Visually, this car continues the SLK recipe that's been stablished since 1996 - long bonnet, compact cockpit and folding hard top roof - but adds to it a raft of fresh technology that should play well with potential buyers.

The mainstream engines start with the SLC 180 which features a 1.6-litre turbo petrol engine developing 156bhp. Next up are the 2.0-litre petrol variants, the SLC 200 which offers 184bhp and the SLC 300 which delivers 245bhp. The efficiency champion remains the 204bhp diesel model, the SLC 250d. For high performance, there's a fresh range flagship, the Mercedes-AMG SLC 43. This car mates a 367bhp, 3.0-litre V6 biturbo engine with a modified version of the AMG sports suspension familiar from the old Mercedes-AMG SLK 55, and the combination is reflected in the sporty performance figures, with the SLC 43 accelerating from rest to 62mph in 4.7 seconds. The SLC 180 and SLC 200 models are fitted with a 6-speed manual gearbox. The brand's latest sport/comfort-oriented 9G-TRONIC automatic transmission is available for these models as an option and fitted as standard in the SLC 250d, the SLC 300 and the AMG SLC 43. Mercedes thinks that a big SLC selling point will be its 'DYNAMIC SELECT' vehicle dynamics system, one of those that enables you to alter your car's engine, transmission, steering and suspension characteristics at the touch of a button. The five modes - 'Comfort', 'Sport', 'Sport+', 'Eco' and 'Individual' are easy to select using the DYNAMIC SELECT button in the upper control panel on the dashboard console. The selected mode is shown on the colour multifunction display and also appears as a pop-up message on the head unit display. DYNAMIC SELECT is a standard feature in the SLC 300 and SLC 250d. In the SLC 200 with 9G-TRONIC, transmission mode selection is available as an option. The SLC 43 features an AMG Sport exhaust system as standard and uses the two adjustable exhaust flaps to adapt the sound to the mode selected via DYNAMIC SELECT. This is optional on some other models and keen drivers will also want to look at the extra-cost 'Dynamic Handling package' which features a 10mm lower chassis, an adaptive damping system, a direct steering system and the brand's clever 'ESP Dynamic Cornering Assist' package.

As part of the facelift that's transformed the SLK into this SLC model, the Mercedes-Benz designers have tried to further hone this roadster's sporty look. There's a re-styled front section that sees the steeply raked diamond radiator grille elongate the appearance of the arrow-shaped bonnet. In addition, there's a bumper which features striking air intakes, dynamically modelled contours and high-quality chrome trim at the lower edge, along with distinctive headlights incorporating LED daytime running lamps, plus there's the option of an LED Intelligent Light System. The side view of the SLC reveals the typical features of a roadster, with a long bonnet, a passenger compartment that is set back and a short rear. The silhouette is defined by a variety of things; the gently rising beltline, the sweeping curve of the roof, the powerfully moulded wheel arches, sporty 16 to 18-inch light-alloy wheels and the ventilation grilles in the front wing. Inside, Mercedes has tried to give the cabin a higher quality feel, with extra flashes of aluminium and carbonfibre, plus electroplated control elements for the electrically adjustable seats and gearshift paddles. The instrument cluster looks smarter too, with the tubular instrument surrounds now featuring black dials and red needles. A large, multifunction, colour TFT display with a 4.5-inch screen sits between the two dials, with a black-dialled analogue clock available as an option. The main central infotainment display between the two ventilation outlets in the centre console goes up in size from 5.8 to 7 inches. There's also a smarter flat-bottomed steering wheel trimmed with DINAMICA microfibre. As with the old SLK, you get an electrically-operated panoramic folding hard-top vario-roof that you can operate at speeds of up to 25mph. This can come with a 'MAGIC SKY CONTROL' option allowing you to lighten or darken the glass top at the touch of a button. Plus we'd also want to pay extra for the 'AIRSCARF' neck-level heating system. The 335-litre boot continues to be the biggest in the segment.

Prices haven't changed much over those of the SLK, which means that most SLC sales will continue to be made in the £30,000 to £46,000 bracket. Equipment levels are much as before, though it is worth pointing out that the Audio 20 entertainment system can be combined with a Garmin MAPPILOT navigation system. If you want to go further, Mercedes' full-house COMMAND Online infotainment system is available as an option, complete with hard disc navigation, a DVD player, internet access, internet radio, Bluetooth connectivity, LINGUATRONIC voice control, an EMERGENCY Call service and an Integral Media Interface for your iPod or iPhone. Standard equipment on the SLC includes smart features such as Airguide. What's this? Well, rather than the clumsy mesh draught stoppers that some convertibles opt for, Mercedes-Benz aerodynamics engineers have developed a pair of pivoting transparent plastic 'petals' which are attached to the reverse of the roll-over bars. The driver or passenger can rotate them from their stowed position behind the head rest to their 'active' position and cut draughts in a flash. Onto safety. Amid the sea of standard safety features are two of particular note. The drowsiness detection system Attention Assist warns the driver to take a break when they have been driving too long or their driving patterns change. Pre-Safe uses radar to detect an impending collision and primes the brakes, seatbelts and airbags. The optional Pre-Safe Brake system takes things one step further and automatically applies the brakes if the car detects that its' about to run into the back of something.

The SLC's SLK predecessor always did well here thanks to its beefy residual values propping up what was often a not inconsequential price tag. In latter years, fuel and emissions taxation have become a far bigger part of the annual financial equation for most owners, so Mercedes has in recent years worked hard to driving down the costs of day to day ownership. Take the entry-level SLC 200. Even when paired with an automatic gearbox it will still return a combined fuel economy figure of 47.9mpg on the combined cycle, along with 137g/km of CO2. Step up to the SLK 300 and you'll hardly be penalised for the power advantage, this model eking an impressive 47.1mpg and 138g/km of CO2 in its sole auto form. The SLC 43 manages 36.2mpg and 178g/km. As you'd expect, the economy champion of the range is the SLC 250d, which manages 70.6mpg and 114g/km.

Mercedes-Benz is a company that is often underestimated. It understands its audience and knows how to develop cars that tap into their needs and aspirations with laser-guided accuracy. The latest SLC is no different. The road tests virtually write themselves but magazine writers don't have the same forensic grasp of what sells. Expect this car to continue the SLK's record of solid achievement. If anything, it's a car that's become more finely attuned to market conditions than ever before. The efficiency of the engines and the increasingly impressive technology integration mean that the SLC slides effortlessly into a position that makes many of its rivals seem from a prior generation. If you believed that the two-seat roadster was becoming a selfish and irresponsible indulgence, Mercedes clearly thinks it can persuade you otherwise. 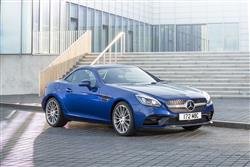 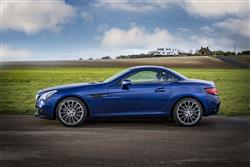 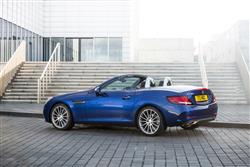 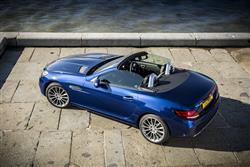 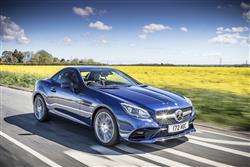 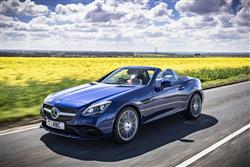