The MG4 redefines its brand - and redefines what customers should have to pay for a cutting-edge compact five-seat EV family hatchback. It probably won't be on your wish list if you're currently looking for a car of this kind. It should be.

For the first time in its long history, MG is a proper mainstream player. Proper in terms of sales (it's currently out-selling both Skoda and Land Rover). And proper in terms of product - or at least in terms of this one, the MG4. The company calls this compact full-EV hatch a 'disruptor', offering much more for much less: and that's exactly what it is. For less than the cost of an EV supermini, here's an all-electric family car that makes similarly sized rivals look hopelessly over-priced. With new Chinese-era MGs of the past, there would have been a caveat to come at this point - or several. Cheap build quality, dull road manners, naff interior plastics and, in the case of an EV, feeble driving range. None of which, on paper at least, seem to apply to the MG4, the first of several future models from the brand to use the sophisticated all-new Modular Scalable Platform that in coming years will transform what we can expect from the marque. If you're about to sign for a Volkswagen ID.3 or a Kia Niro EV, stop and read this first.

There's no key or starter button: you just get in, take a seat, press the brake and the car comes to life. On the move, there are five driving modes (Normal/Sport/Eco/Snow/Custom) and four selectable regenerative braking settings, including an Adaptive mode, the fiercest setting doing 80% of braking for you. This is the first of a series of new-era MG models that ride and handle at a similar level to pricier volume brand competitors. Being able to base everything on properly modern underpinnings helps - in this case, the brand's freshly developed Modular Scalable Platform. But there's more to the engineering here than that: a slender battery pack that occupies almost the whole wheelbase length, a compact rear-mounted motor and perfect 50:50 weight distribution. To start with, there's a choice of two powertrains, both teamed with a 168bhp motor. The base 51kWh version manages 218 miles of range and makes 62mph from rest in 7.7s. Ideally, you'll want to stretch to the 64kWh version, which is a fraction slower to 62mph (7.9s), but goes 281 miles between charges - or 270 miles if you opt for the plusher (but portlier) 'Trophy' trim spec. If that's not really enough for you, then wait until MG introduces the Extended Range model, which has a larger 77kWh battery and targets 329 miles of range. For the future, a dual motor AWD performance hot hatch model is planned, which will be the fastest MG in history, with 443bhp and a sub-5 second 0-62mph sprint time.

Think of this car as a Chinese take on a Volkswagen ID.3 and you won't be far off the mark. The two cars are similar in size and if anything, the MG4 looks more contemporary, with its 'floating' roof, heavily sculpted black lower bodywork, short rear overhangs and intricate rear light clusters. The insectoid looks could do with a larger set of wheels than the standard 17-inch rims to set them off, but aesthetically that's about it on the debit side. It feels uber-modern and a whole generation on from anything MG has ever produced inside the minimalist cabin too. At first glance, there's a curious steering wheel (flat-topped and bottomed) through which you view a 7-inch instrument screen. Plus a centre 'floating' 10.25-inch infotainment display. And not a lot else. The interior looks lacks the bright and cheery feel of an ID3. And you could nit-pick about some aspects of plastics quality. But overall, the design here lacks little in either ambition or execution. Apart from the drive selector and the parking brake, the only physical controls are a row of buttons beneath the central screen. Rear seat space is fine by the standards of Focus-sized compact hatchbacks - couple of six-footers will just about fit. And there's a reasonably-sized 363-litre boot with a false floor, the area extendable to 1,177-litres by the usual split-folding rear bench.

Prices start from around £26,000, which gets you the MG4 EV in base 'SE' trim, a variant available with either Standard Range or (for £1,500 more) Long Range batteries. The top 'Trophy' version (around £31,500) only comes in Long Range form. These figures might sound a lot if you're not familiar with EV pricing these days, but they represent a massive saving on segment rivals - and also undercut smaller EVs too. The key segment rival, Volkswagen's ID.3, starts at around £36,000: a Kia Niro EV is hardly any cheaper from around £35,000. Even a much smaller Vauxhall Corsa-e supermini cost around £29,500 at the time of this review. Most EV customers buy with finance - and there, things look even better. The volume MG4 'SE' Long Range model would, at launch, require £350 a month from you. Compare that to £564 a month for a rival Volkswagen ID.3. Or £417 a month for a smaller Renault ZOE or £430 a month for a smaller Vauxhall Corsa-e. You get the idea. It isn't as if MG has skimped on kit either. 'SE' models get automatic LED headlights and rear lights, rear parking sensors, 17-inch alloy wheels, adaptive cruise control, automatic climate control and MG iSmart app connectivity. Plus the company's MG Pilot advanced driver assistance system. Top 'Trophy' variants gain a two-tone roof, rear privacy glass, a twin aero rear spoiler, a leather interior with electric driver's seat, heated front seats and steering wheel, a Bluetooth key, satellite navigation, a 360 camera, wireless phone charging and an upgraded MG iSmart system compatible with live services. Plus there's an upgraded MG Pilot system, with the inclusion of Blind Spot Detection (BSD), Lane Change Assist (LCA) and Rear Cross Traffic Alert (RCTA).

Earlier we gave you the driving range figures: 218 miles for an 'SE' 51kWh model; 281 miles for an 'SE' Long Range 64kWh version; and 270 miles for a 'Trophy' 64kWh top variant. With the promise of 329 miles for the future 77kWh Extended Range derivative. To achieve these figures, you'll obviously have to regularly select the provided Eco driving mode and get familiar with the fiercest regenerative braking setting. As for charging, well the 64kWh variant that most will want equals the same charging speed you'd get with a rival Volkswagen ID.3, accepting rates of 135kW. That's enough to replenish the battery from 10 to 80% in 35 minutes. You might worry about depreciation from a budget brand like MG. Actually, the opposite is true. Industry experts CAP reckon that this MG4 in volume 'SE' Long Range form will retain up to 64.6% of its value after three years - which is similar to the return you'd get from premium brands like Tesla, Porsche and Land Rover. Even the top 'Trophy' version will retain 61% of its original cost. And if that doesn't convince you, then the comprehensive 7 year warranty just might. Insurance groups start at 27D for the base 51kWh 'SE' model: it's 28D for the 64kWh 'SE' variant: and 29D for the top 'Trophy' 64kWh MG4.

Since MG was taken over by the Chinese SAIC conglomerate, the cars it's sold have been good value, well equipped and practical. But never desirable or dynamically truly class competitive. All that changes with the MG4. It's one of the most surprising cars we've reviewed for ages. All the engineering stuff stacks up, it looks good and driving range and charging figures are all up to snuff. You might find the minimalist interior a bit sombre and criticise a few of the plastics. But you'll forget all that when you find that this car costs up to £10,000 less than some of its obvious rivals, is better equipped and comes with a 7 year warranty. After trying an MG4, you may well still decide you want a better-known segment rival. But make no mistake: if you're choosing an EV in this class, try one you must. 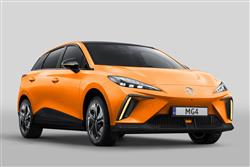 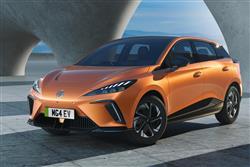 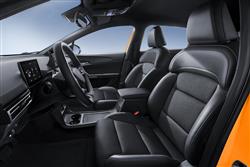 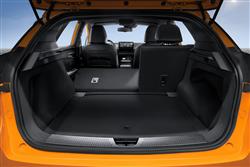 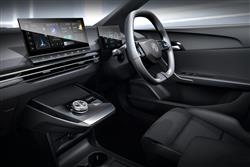