With this second generation Clubman model, the British-based MINI brand sets its sights on premium hatchbacks like the Mercedes A-Class and Audi A3. Jonathan Crouch drives one.

The first modern-era MINI Clubman was launched in 2007 as the first truly practical MINI - but came with one key drawback: you couldn't have two rear passenger doors. This second generation model not only corrects that oversight but is also smarter, better equipped, higher-tech and more efficient. But can it set itself apart from the Hatch 5-Door and Countryman models in MINI's range? Let's see.

It's hard to think of a modernday motoring success story to rival that of BMW's MINI. The Bavarians took the 60s design concept, super-sized it and made it the ultimate automotive fashion accessory for the early years of the 21st Century. But the car's cheeky compact size was both its greatest draw and its only real limiting factor. If the same design could be produced with a dash more practicality, couldn't many more customers be persuaded to join the great MINI Adventure? The prospect was tempting, but the problem for the German designers was in creating a truly versatile family car that kept the original three-door model's essential MINI-ness. They'd already watched rivals Mercedes struggle - and fail - to develop the smart brand in the same way. What they eventually came up with in 2007 was this model, the MINI Clubman, an estate car, but not as we knew it. Curious, quirky and thoroughly individualistic, it was a perfect fit for a brand that has always been all those things. Nine years later, we got that car's successor, this MK2 model Clubman. With five proper doors this time round, a smarter look, extra space and all the MINI brand's latest technology, it's an intriguing prospect. What we're looking at here is a usefully revised version of that car.

So what's it like on the road? A little different from the MINI norm is the answer - but thankfully, not too different. No, it doesn't feel quite as sharp and frisky as the 5 Door Hatch model to drive, but then this is a larger, heavier car. Anyway, compensation comes with better refinement and far superior ride quality thanks to a purpose-designed multi-link rear suspension system. If you want to tweak the damping, an optional 'Variable Damper Control' control system allows you to do it, working through the 'Green', 'MID' and 'Sport' settings of the 'MINI Driving Modes' system, another extra-cost feature. There's a familiar range of engines under the bonnet. There's a three cylinder 1.5-litre petrol unit with 136hp in the 'Cooper' version, while the Cooper S gets a 2.0-litre four cylinder petrol engine with 192hp. If you want a diesel (a rare thing in a MINI of almost any sort these days), there's a 2.0-litre powerplant with 150hp in the 'Cooper D'. Standard with all the engines is a six-speed manual gearbox - with 7-speed Steptronic automatic transmission optional on the petrol variants. There's no performance reduction if you do decide on the auto option. In fact, the eight-speed units actually reduce the 0-62mph times.

The 1.5-litre petrol 'Cooper' variant is notably economic, in manual form managing up to 50.4mpg (WLTP-rated) and up to 127g/km of CO2 (NEDC-rated). For the auto version, the figures are 53.3mpg and 120g/km. For the 2.0-litre petrol Cooper S, you're looking at up to 44.1mpg and 145g/km in manual form or up to 51.4mpg and 125g/km as an auto. For the 2.0-litre diesel, the readings are up to 65.7mpf and up to 113g/km as a manual or up to 67.3mpg and up to 111g/km as an auto. Buyers should expect a standard 3 year 60,000 mile warranty, with fixed price servicing under MINI's TLC scheme a worthwhile option. Residuals have always been a MINI strongpoint, so your Clubman should retain a good chunk of its value when you come to sell. Just make sure you don't go overboard on the extensive options list. Speaking of options, try to keep any paint combinations on the tasteful side to maximise resale value.

The designers have done their damnedest to make this second generation Clubman a distinct and desirable model in its own right. The result is characterful but distinctly MINI - just as potential buyers will want. If you need a practical car from this brand and find the Hatch 5-Door model too small and the Countryman Crossover too quirky, then the Clubman may be for you a perfect fit. It certainly makes its BMW 2 Series Active Tourer donor car look a little bland. True, the 2.0-litre engines further up the range aren't quite as efficient as those you'll find in rivals but MINI is close enough to the pace in this regard for that not to matter very much. It all means that if you want something compact but practical and a bit different, then this Clubman will probably suit. Either way, potential owners have to be people unafraid to fly in the face of convention. If that's you, then a bigger MINI adventure beckons. 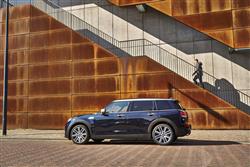 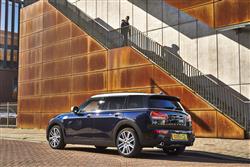 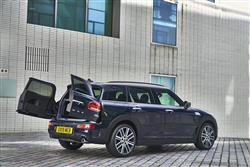 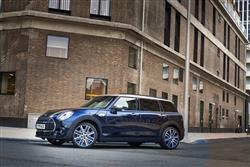 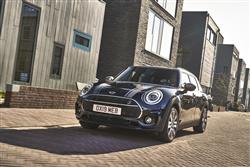 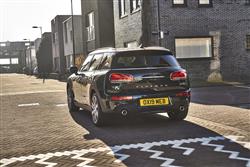