In recent years, MINI has re-invented its Clubman model as a Focus-sized family hatchback. And it makes a fun and practical choice in volume Cooper D diesel guise. Jonathan Crouch looks at the revised version.

MINI is suggesting that family hatchback buyers wanting something a little different at the upper end of the Focus and Golf segment should 'go with their gut' and choose this improved second generation Clubman model. Drawing inspiration from the MINI estates of the 1960s, it's the most accessible car the brand has ever produced and also the largest. Unique twin rear doors add a dash of uniqueness too. Here, we look at the volume 2.0-litre 150bhp Cooper D version.

MINI has never really gone mainstream. In past years, the brand's BMW-era products have been stylish, quite up-market but a little different. With this second generation Clubman model though, launched in 2015, that policy started to change. This was the company's first serious attempt at a volume market segment, in this case that for Focus-class family hatchbacks. It's a very significant car. The concept of a slightly more spacious MINI is nothing new. But the delivery of one with the practicality and sophistication to directly take on the Focus fraternity very definitely is. This Clubman model can offer this because BMW itself has also entered this market with its 2 Series Active Tourer, the company's first front-driven design. The two cars share the same engines and underpinnings - which means that Clubman buyers will get more sophisticated mechanicals than they might expect from a MINI: an engine as large as 2.0-litres in size, for example, in the volume Cooper D diesel variant we're trying here.

So what's it like on the road? A little different from the MINI norm is the answer - but thankfully, not too different. No, it doesn't feel quite as sharp and frisky as the 5 Door MINI Hatch model to drive, but then this is a larger, heavier car. Anyway, compensation comes with better refinement and far superior ride quality thanks to a purpose-designed multi-link rear suspension system. If you want to tweak the damping, an optional 'Variable Damper Control' control system allows you to do it, working through the 'Green', 'MID' and 'Sport' settings of the 'MINI Driving Modes' system, another extra-cost feature. Engine-wise, the bulk of the range is based around 2.0-litre power that gives buyers the option of an 8-speed auto 'box as an alternative to the standard 6-speed manual. Most buyers will want the 150hp Cooper D diesel we tired, a car that makes 62mph from rest in around 8.5s. A pokier 190hp Cooper SD variant is also offered. Of course you can't have everything. This Clubman's larger size will make it a touch less wieldy around town than you might expect a MINI to be; the turning circle, for example, has risen from the 11.0m reading you get in a MINI 5 Door Hatch to 11.3m here. Still, we'll take that in return for the improved ride quality, something complemented by impressive refinement that would be even better if MINI could find a way of keeping tyre roar down.

There's no disputing that from the outside, the Clubman still looks like a MINI, even though it's quite a substantial thing, almost identical in height and width to a Volkswagen Golf or Ford Focus. Changes with this revised model are minimal, perhaps the most notable one being the re-designed grille, which now extends across the entire bumper. With a sleeker structure for the air inlet, it gives the front view a more distinctive appearance. The grille is bordered by a slim frame produced from a single piece. There are also re-styled circular LED headlamps. Two distinctive side-hinged split rear so-called 'Clubdoors' mark this model out from any other on the road. They open via a dual-section chrome handle or, with the optional 'Comfort Access' feature fitted, by waving your foot beneath the bumper if, key in pocket, you approach the car, laden down with bags. Inside, you'll find 360-litres of luggage space. If that's not enough, then flattening the rear bench frees up more space than any MINI model to date has ever provided - 1,250-litres. Enough on practicality: time to move up-front. Here, there'll be a conflicting mix of impressions for those familiar with modern MINIs thanks to design that's different, yet somehow still the same. Features like decent door armrests and a centre console that, for the first time on a MINI, extends up to the instrument panel make it feel more grown-up inside. In fact, you might even talk of a 'BMW-style' feel were it not for familiar MINI touches like the column-mounted dials, the row of toggle switches below the ventilation controls, the personalisable interior light colours and, most familiar of all, the huge circular display that crowns the centre stack.

MINI isn't troubling to address the budget end of the family hatchback segment here, instead targeting this second generation Clubman at Volkswagen's Golf and better-specified mainstream Focus or Astra models in this sector. That means pricing in the £20,000 to £28,000 bracket. Here, we've been trying the volume 2.0-litre diesel Cooper D version which costs from around £23,500 in base 'Classic' trim. There are also pricier 'Sport' and 'Exclusive' trim options. Either way, we reckon that this derivative is the one to go for, offering punchy 150hp performance at a premium of around £2,300 over the 1.5-litre petrol-powered base 'Cooper' derivative. Equipment levels are pretty generous, with the Cooper receiving 16" alloy wheels, sat-nav, Bluetooth handsfree phone connectivity, a central display with LED ring and start/stop with keyless start. You also get an 'Excitement Pack' which adds extended interior lighting and projects the MINI logo onto the ground when you open the door, just in case you forgot what you were driving. Expect the usual range of MINI safety features, including ABS, stability control, traction control and optional adaptive cruise control.

Let's get one thing out of the way first: this MINI won't be the cheapest car in its class to run. The big 2.0-litre engine you get on Cooper D and Cooper S models makes sure of that. That's not to say the Cooper D won't be frugal; official figures suggest it'll get up to 65.7mpg on the combined cycle, while chucking out 112g/km of CO2. That isn't much worse than some smaller 1.6 litre rivals. Buyers should expect a standard 3 year 60,000 mile warranty, with fixed price servicing under MINI's TLC scheme a worthwhile option. Residuals have always been a MINI strongpoint, so your Clubman should retain a good chunk of its value when you come to sell. Just make sure you don't go overboard on the extensive options list. Speaking of options, try to keep any paint combinations on the tasteful side to maximise resale value. Almost all MINI buyers opt for the no-brainer TLC package, which, for around £350, gives you comprehensive servicing cover for five years or 50,000 miles, whichever is reached first.

In summary, if you need a practical car from this brand and find the Hatch 5-Door model too small and the Countryman Crossover too quirky, then Clubman ownership could be tempting, particularly in this Cooper D guise. Forget the compromised and poorly executed first generation version of this car: this MK2 Clubman model is a very different proposition. Some other family hatches still offer a little more practicality but there's no doubt that the prospect of going Club-class and enjoying this car's eager uniqueness will seem very appealing to many of the new buyers MINI is seeking to target. Of course, Clubman customers must still be people unafraid to fly in the face of convention. If that's you though, then a bigger MINI adventure beckons. 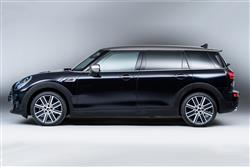 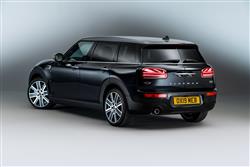 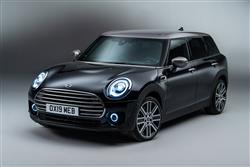 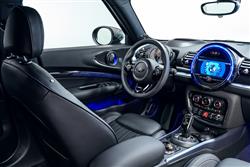 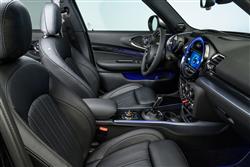 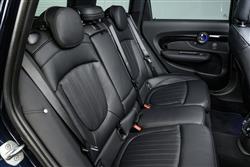