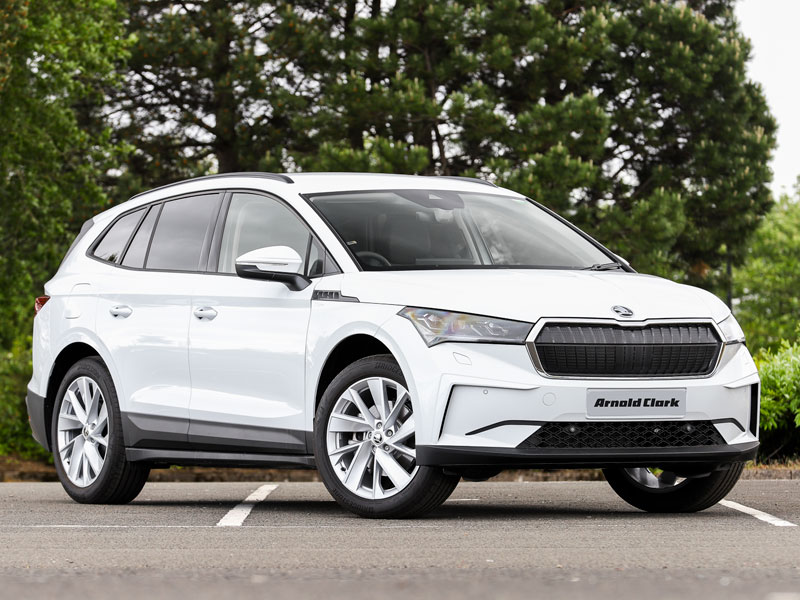 Skoda embarks on an electric future with this clever Enyaq iV. Jonathan Crouch drives it.

We're told that the Enyaq iV ushers in a new era of design and engineering for Skoda. Perhaps it does. A less charitable way of looking at this latest EV is that it's a Czech take on the same technology also used by its VW Group cousins, the Volkswagen ID.4 and the CUPRA Born. Like those two models, this one is a full-electric, 5-door Crossover, larger in size than, say, a Kia Niro EV and offering, according to Skoda, almost the same interior space as its own conventional full-size SUV, the Kodiaq, though with the Enyaq, you can't have seven seats. Full-battery power is nothing new to this Czech maker. But it will be to most of its customers. Which is why so much effort has been made here to help ease them into this brave new world of electrified mobility. The designers have held back on some of the slightly futuristic exterior and cabin styling cues you'll find on some of the EVs in this class. And there are all the usual Skoda 'Simply Clever' practical touches to make ownership that little bit easier. Plus there's the choice of standard hatch or Coupe body styles. Let's take a closer look.

You ease away in an Enyaq, rather than needing to moderate the kind of frantic forward thrust that seems more normal of an electric vehicle these days. That doesn't really suit any 2.0-tonne SUV and it certainly wouldn't suit this Skoda, the relaxed drive dynamics of which, it's immediately clear, are geared towards lowering the heartbeat rather than raising it. Most Enyaqs are of the rear-motor, rear-driven sort, a format not seen on a Skoda since the brand's budget models of the '60s and '70s and one that benefits this car enormously in town, where it offers an impressively tight 10.2-metre turning circle. Beyond the city limits, traction is impressive but there's a little more body roll through the turns than you'd get with the alternative Volkswagen, CUPRA and Audi versions of this VW Group design. The pay-off for that though, is a much better standard of ride, with suppleness over poor surfaces and speed humps that's un-bettered in this class and is far superior to most rivals. There's the choice of two or four wheel drive versions of the Enyaq iV. The base rear driven model, the iV 60, has a 179PS electric motor powered by a 62kWh battery with a range of 246 miles. Above that sits the Enyaq iV 80, which has a 204PS motor powered by an 82kWh battery that should produce a total WLTP-rated range of 329 miles. Top speed is 99mph and 62mph from rest takes 8.4 seconds. The alternative mainstream model, the iV 80X, also uses an 82kWh battery but adds four wheel drive, which means extra weight (hence the a reduction in range to 312 miles). It goes a bit quicker though, the 265PS 80x iV making the 62mph dash to 6.7s. When fitted with an optional folding towbar, any Enyaq iV is also capable of towing trailers weighing up to 1,400kg.

There's the choice of standard hatch or Coupe versions of this Enyaq iV: we're looking at the standard one here. The look of the Enyaq iV moves Skoda into a new design direction, the main theme being most obvious at the front, which can be optionally embellished with an illuminated 'Crystal Face' grille. Full-LED Matrix headlights at the front are joined at the rear by LED tail lights which include dynamic indicators and an animated 'Coming/Leaving Home' function. Measuring 4,648mm long and 1,877mm wide, this car is quite substantial in stature, though it's actually shorter than a Skoda Octavia. Still, thanks to the clever design of the MEB platform it sits on, the Enyaq offers superb interior space. With the traction battery housed in the floor and a compact motor mounted beneath the cargo area base, this Czech EV has a cabin unburdened by the packaging compromises of a traditional internal combustion engine car. That cabin is 'inspired by modern living environments', according to Skoda, and uses 'natural, sustainably processed and recycled materials'. The fascia's dominated by a central 13-inch infotainment touchscreen, which can also be worked by both voice and gesture control. There's also a further 5.3-inch instrument binnacle display. A further interior highlight is the wonderfully-named optional 'Jumbo Box', which adds 6.2 litres of storage underneath the centre console. There's comfortable space for a couple of adults on the back seat. And boot capacity is ample at 585-litres.

Prices start from around £38,500 for the iV 60 with its 62kWh battery. For around £42,500, the iV 80 with its larger 82kWh battery gives customers a much longer range capability. Either way, they get a decent level of standard equipment, including chrome detailing, front parking sensors and a rear view camera. Also included is a heated two spoke steering wheel that features paddles to adjust the brake regeneration level, 'Drive Mode Selection' and an infotainment system with navigation. There are four optional packs owners can add - badged 'Clever', 'Plus', 'Advanced' and 'Maxx'. Opt for the most dynamic 'SportLine Plus' Enyaq iV variants (priced from around £48,500) and you'll get the 'Clever' and 'Plus' package features included. The top 80X 'SportLine' twin motor all-wheel drive variant costs around £51,500. Connectivity is key with the Enyaq iV and all models feature a 13-inch free-standing display screen with optional head-up display, including augmented reality navigation. The car also features a permanent internet connection, ensuring that the information being fed to it is always up-to-date. The most recent models benefit from an ME3 platform software upgrade, which has improved the navigation, Head-up display and climate systems. Let's finish with a look at safety. You'd expect some sort of Forward Collision Warning autonomous braking system on a car of this kind these days; Skoda's is called 'Front Assist' and as usual with these sorts of set-ups, it scans the road ahead as you drive. If a potential collision hazard is detected, you'll be warned. If you don't respond - or aren't able to - the brakes will automatically be applied to decrease the severity of any resulting accident. It incorporates 'Swerve Support' that stops you from turning into a junction into the path of another car. Plus there's 'Dynamic Road Sign Display' (which pictures speed signs as you pass and displays them on the dash). Every Enyaq iV also gets a 'Lane Assist' lane-keeping system that warns you when you stray out of your lane and applies gentle steering assistance to ease you back into it.

We gave you the driving range figures in our 'Driving Experience' section: they're very class-competitive, though, as you would expect, don't differ much from what you'd get in a comparable Volkswagen ID.4 or CUPRA Born EV. Sleek, aerodynamic styling (the drag coefficient is an impressive 0.27Cd) along with ample-sized batteries obviously help here. All Enyaq iV models have a minimum DC rapid charging capability of 125kW as standard. The Enyaq iV offers customers three charging options. In addition to using a standard household 230V socket with 2.3 kW alternating current (AC), it can be charged at home overnight using a wallbox of up to 7.2kW. The charging process with a 7.2kW wallbox takes approximately 13 hours for the 82kWh battery (up to 100% charge). As a third charging option, the vehicle can be connected to rapid DC charging points with a charging capacity of up to 125 kW. This allows the Enyaq iV 80 to be charged from 10 to 80 per cent in as little as 38 minutes. The availability of a heat pump option also means that the air conditioning and heating uses less battery power than a high-voltage heater, increasing range over other EVs that don't use this system, especially during periods when the external temperature is much lower. A dedicated app called 'Skoda Connect' allows owners to control the air-conditioning and battery charging remotely.

For us, the Enyaq iV represents a sweet spot in the family EV market. A Volkswagen ID.4-sized model for the price of a little ID.3 you might say - and you wouldn't be too far wrong. Skoda's certainly made very good use of that same German engineering here. A typical Skoda customer will like the rather relaxed way that this car goes about its business on the road. These people may well also value this Crossover's impressive cabin space, superb ride quality and neat 'Simply Clever' practical features. They'll also like the excellent build quality, the accuracy of the range predictions and the way you can option up the cabin in a really classy way. The Enyaq iV is supposed to open up a fresh era for this Czech maker - and perhaps it does. Future EVs from this brand may well be a little more Skoda-like, but this one sets a trend we hope those forthcoming models will follow - that of offering more for less. It's an approach that's characterised the company for as long as we can remember and we're pleased it's being continued here. More importantly, we think you will be too. 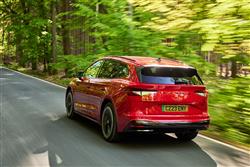 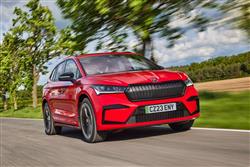 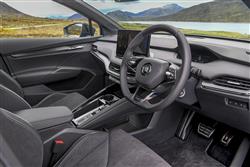