Skoda's fourth generation Fabia makes up in sense and practicality for anything it might lack in dynamic looks and pin-sharp handling. All the latest VW Group chassis technology has finally made it to this supermini model line and the result is a very complete product indeed.

Skoda's modern day renaissance can broadly be traced to one model, this one, the Fabia supermini. The design we look at here is the fourth generation version, building on a heritage stretching back to 1999 when the MK1 Fabia arrived to replace the old-fashioned Felicia model. That all seems very long time ago now. Today, the Skoda brand is so in tune with the times that the Volkswagen Group has chosen it to develop its forthcoming range of small electric cars. But for the time being anyway, in the Czech maker's line-up, there still a place for a conventional combustion supermini like the Fabia. This MK4 version is the last of the VW Group superminis to get the brand's MQB-A0 chassis, a platform that's already been in use in cars like Volkswagen's Polo, SEAT's Ibiza and Audi's A1 for half a generation. It was certainly needed for this Fabia, the previous car having been based on elderly PQ35 underpinnings dating all the way back to a turn-of-the-century MK5 Golf. It should make this fourth generation Fabia bigger. But has it made it better?

If you're looking for the fundamental changes made here, you won't find many of them beneath the bonnet. At the foot of the range, a normally aspirated three cylinder 1.0-litre MPI petrol unit mated to a 5-speed manual gearbox is offered for budget minded folk, offering either 65 or 85PS, but we'd avoid it unless you particularly need the cheap insurance ratings that come with that engine. As before, the range is mainly based around the usual VW Group 1.0-litre TSI three cylinder turbo petrol engine, offered as ever in 95 and 110PS states of tune. You get a six-speed manual gearbox with the 95PS version and a seven-speed DSG auto with the 110PS variant. There's no longer a diesel option, or any sort of fast vRS hot hatch model. But you can ask your dealer about a larger 1.5-litre TSI four-cylinder petrol unit with 150PS, paired non-negotiably with the DSG auto 'box. Expect roadgoing drive dynamics similar to those of the previous generation model - in other words, tuned for comfort rather than engaging handling. Skoda has made the damping noticeably softer than, say, SEAT Ibiza and more like a Volkswagen Polo, which shares this Czech model's conventional torsion beam rear suspension set-up. There are no mild hybrid or plug-in powertrain options - they'd push the price too much.

Visually, this fourth generation Fabia is clearly an evolution of what went before. It looks noticeably bigger than its predecessor and is, 11cm longer than the previous version. The restyled headlights feature part-LED technology as standard and the sharply drawn crystalline tail lights can also be had with LED tech on request. There are sleeker aerodynamics to - the Cd factor has fallen to 0.28. The biggest changes though, are found inside, where mid and high-spec models gain a 10.25-inch digital instrument panel; conventional dials separated by tiny 3.5-inch display are retained further down the range. The centre stack screen offers further sophistication, available in a choice of 8.0 or 9.2-inch sizes. Soft plastics are noticeable by their absence, but there's a strip of fabric along the middle of the fascia to break things up. As usual with Skoda, the cabin features a range of 'Simply Clever' touches - a possible 42 in all - like an umbrella in the door armrest, smart phone holders in the front seatbacks and rubbish containers in the door cards. Rear seat space, aided by the 94mm wheelbase increase, is near class-leading, as is leg room. There's a big boot (for a supermini) too; it's 380-litres in capacity - as big as you get from a Volkswagen Golf from the next class up. And it's full of various nets and partitions, plus a hammock for loose items.

Skoda no longer feels the need to price the Fabia way below its Volkswagen Polo and SEAT Ibiza VW Group supermini cousins, so pricing (as with those cars) sees most variants pitched in the £15,000-£18,500 bracket. There's a choice of five trim levels - 'S', 'SE Comfort', 'SE L', 'Colour Edition' and 'Monte Carlo'. Lots of new luxury tech features have been added this time round - like ambient lighting on plusher models which allows the driver to illuminate the decorative trim on the dashboard in white or red. You can also now have a heated windscreen and dual zone Climatronic climate control with a rotary knob allowing the temperature to be regulated separately on either side of the vehicle. There's also a choice of three different infotainment systems, plus wireless smartphone integration and mobile online services from Skoda Connect. LED headlamps offering a more intensive low beam and high beam as well as cornering and adaptive light functions are optional too. Your dealer will also want you to consider the optional 'Travel Assist' system, which incorporates Adaptive Cruise Control, Lane Assist and Traffic Sign Recognition and can provide automatic support with longitudinal and lateral steering - at the touch of a button. Side Assist, Front Assist with Predictive Pedestrian and Cyclist Protection, Park Assist and Manoeuvre Assist are also new to the range. And you can have up to nine airbags.

Expect very class competitive efficiency showings - as usual from a VW Group-engineered supermini. The base 1.0 MPI EVO three cylinder petrol engine in 80PS form manages 56mpg on the combined cycle and up to 114g/km of CO2. The 1.0-litre TSI EVO engine that most will choose in 95PS form manages almost the same readings - 56mpg on the combined cycle and up to 113g/km of CO2. The same engine in 110PS form with either six-speed manual or seven-speed DSG auto transmission manages 58mpg and also up to 113g/km of CO2. The 1.0-litre TSI engine has been improved for this latest Fabia with plasma-coated cylinder liners. These measure just 0.15mm and replace cast-iron cylinder liners, reducing internal friction in the three cylinders, which lowers fuel consumption and emissions. For the four cylinder 1.5 TSI EVO 150PS petrol unit with DSG auto transmission, the figures are 50mpg and up to 128g/km. This latter engine benefits from active cylinder technology which shuts down two cylinders under light-to-medium throttle loads. Less impressive than all the engineering on offer here is the three year/60,000 mile warranty cover. We can't see why Skoda couldn't extend that mileage limit to 100,000 miles, since that's what you get on mechanically very similar VW Group vans. Doing that though, wouldn't give Skoda dealers so much of an opportunity to sell extended four or five year warranty packages.

It's taken some time for the Skoda Fabia to get up-to-date with the latest VW Group supermini chassis technology but now that it has, there's a lot to like here. Not least the fact that what you're getting is a car with the footprint of the small hatch but pretty near the interior space of a much pricier Focus or Golf-sized model from the next class up. You'd certainly struggle to find another supermini with more rear seat space and a larger boot than this one. It's true that quite a few rivals have more dynamic styling and more engaging drive dynamics. But the sort of folk who'll like the Fabia will be more interested in the cabin's many 'Simply Clever' practical features which make everyday life just that little bit easier. Which is what owning this Skoda is all about. If what you want is ultimately the most sensible car in the sector, you might just be looking at it right here. 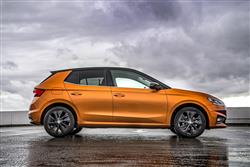 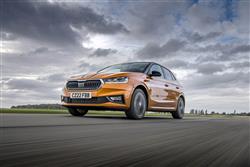 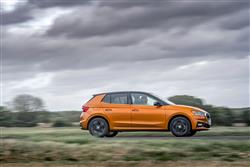 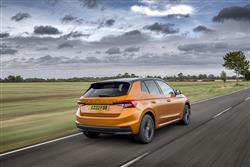 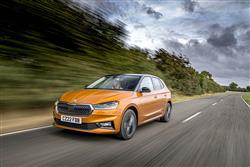 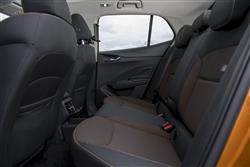