The Toyota Corolla Trek adds a bit of lifestyle trend to the Corolla hybrid formula. Jonathan Crouch tries it.

It's hard to imagine a less suitable vehicle for a countryside trek than a Toyota Corolla hybrid. Such though, is the draw of the SUV market that the Japanese maker has found it necessary to introduce crossovers genes even into this frugally-focused family model - specifically into the Touring Sports estate version. Welcome to the Toyota Corolla Trek.

The Trek isn't any sort of SUV of course, but it is apparently aimed at 'active families' and is given a lifestyle vibe by a partnership with US bicycling giant Trek. All the usual rufty tufty visual additions for crossovery estates are in evidence - and there's a small right height increase too. The Trek is based on the Touring Sports estate version of the Corolla and the reality is that those who choose one will be doing so for much the same reasons as any other Touring Sports buyer - namely the fact that this is the only compact estate in the class to offer self-charging hybrid power. That certainly makes this car's most direct rival, the Ford Focus Active estate, look a bit old-school.

You'd be very unwise to try and replicate the lifestyle marketing and undertake any sort of gnarly off road trail in this Corolla Trek. Yes, right height is raised over standard model by 20mm, but there's no kind of four-wheel-drive or front wheel grip control system. And anyway, this car really isn't built for that kind of thing. Under the bonnet, as with a usual Corolla Touring Sports model, there's a choice of two self-charging hybrid powertrains - a 120bhp 1.8-litre variant and a perkier 178bhp 2.0-litre unit that's engineered for more power on demand and more effortless acceleration, without compromising overall fuel and emissions efficiency. As full hybrids, both powertrains have the advantage of offering an all-electric drive capability, with zero emissions and fuel consumption. Both, as you would expect, are also matched to a seamless belt-driven CVT automatic transmission with six speeds. There are wheel-mounted paddleshifters supplied as part of this transmission package, but it's unlikely that typical buyers will make much use of them. For the record though, the 2.0-litre hybrid variant should get from rest to 62mph in around 8 seconds, which is reasonably rapid by class standards. Expect refinement to be excellent; certainly far better than it would be in a rival rumbly diesel.

The Corolla Touring sports is one of the better looking compact estates and its appearance is lightly embellished in Trek-spec. Added details include a honeycomb front grille, bespoke 17-inch machined alloy wheels, rear privacy glass, front fog lamps and LED headlamps. Plus there's the 20mm ride height increase mentioned earlier. Like an ordinary Corolla Touring Sports model, this one sits upon a lengthened 2,700mm wheelbase version of thus Japanese maker's 'TNGA' 'Toyota New Global Architecture' platform. In profile, it shares its hatchback stablemate's steeply raked windscreen, which flows into an extended roofline with aluminium roof rails and an integral rear spoiler. Inside, bespoke 'Trek' features include upholstery in a two-tone textile material, matching the decorative wood-finish elements of the dashboard. Plus the 'TREK' logo is present in both the door steps and the tailgate. As usual on a Corolla, you get an 8-inch 'Toyota Touch 2' centre-dash infotainment screen as standard, complete with a DAB tuner and a reversing camera. There's comfortable space for a couple of adults on the rear seat, though it'd be a squash for three. And out back, in the 1.8-litre variant, there's a 598-litre boot (or 581-litres in the 2.0-litre model) and, with the rear bench folded, 1,591-litres and 1,860mm of load space length.

Trek prices start at just over £29,000; that's for the 1.8-litre Hybrid version. There's a premium of around £1,700 to find if you want the 2.0-litre Hybrid engine - which we'd suggest is well worth finding. For reference, the asking figure is about £1,000 more than Toyota's asking for a top-spec 'Excel' version of the conventional Corolla Touring Sports model. Either way, you're really going to have to want to make a lifestyle statement here. Standard equipment includes a 7-inch colour TFT display in the instrument cluster, along with 17-inch machined alloy wheels, rear privacy glass, front fog lamps, roof rails and LED headlamps. Plus there's heated front seats with lumbar support, automatic headlights and dual-zone air conditioning. You also get parking sensors and an Intelligent Park Assist' set-up that will steer you into spaces. The Corolla TREK is equipped also with an 8-inch TFT infotainment 'Toyota Touch 2' screen, your access point for satellite navigation and voice control, a DAB tuner, Bluetooth and a reversing camera. Plus there's the latest version of the Toyota Safety Sense package. This includes a Pre-Collision Safety System with day-time cyclist detection and both day and night-time pedestrian detection. Plus there's full-range Adaptive Cruise Control, Lane Trace Assist, Traffic Sign Recognition and Intelligent Auto High Beam.

The WLTP stats of this self-charging hybrid are pretty eye-catching. A 1.8-litre Hybrid Corolla Trek manages up to 56.4mpg on the combined cycle and 113g/km of CO2. For the 2.0-litre Hybrid model, the figures are up to 53.3mpg and 121g/km. That's further helped, Toyota expects, by the fact that for typical customers, up to 50% of typical commuting journeys will be accomplished in all-electric drive. The Japanese maker describes the Corolla's Hybrid technology as being of the 'self-charging' variety, which means that it isn't of the currently popular Plug-in variety. The brand of course has this technology (it's available on top versions of its Prius model) but currently feels it isn't necessary for the Corolla line-up. What else? Well, the five year 100,000 mile warranty is extremely good and even after that runs out, you'll find that most spares are relatively inexpensive. There's also three years warranty against rust and 12 years of anti-corrosion protection. Insurance groups range from 14E to 15E for the 1.8 and from 18E to 21E for the 2.0-litre version.

This is a piece of lifestyle marketing, pure and simple. Yet we can't help thinking that for most people buying Toyota's small and mid-sized SUVs, this would probably be more sensible choice. There's a bit of visual impact for the supermarket car park. But nothing that that's going to unduly affect either the day-to-day driving experience or running cost efficiency. And all the usual attributes of a Toyota Corolla hybrid are here. So there's diesel-like economy and all the benefits of electrified power, without the kind of price premium that would accompany purchase of a plug-in hybrid. Toyota still thinks that, by and large, self-charging hybrids are the way to go for family buyers in this segment and if this technology can be served up with a bit more of a lifestyle vibe, then so much the better. If you feel the same, then this car might be worth checking out. 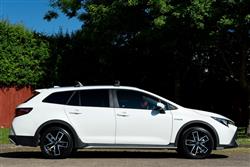 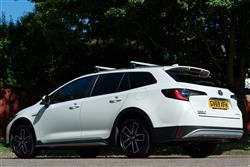 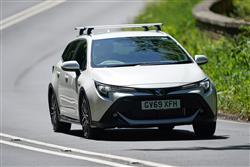 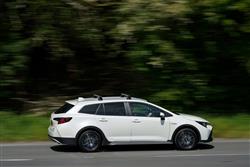 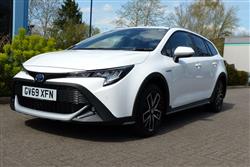 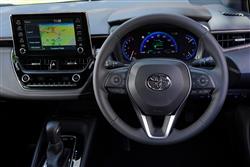