What do people look for in a mid-sized, seven-seat family people carrier? Good build quality, neat packaging, a versatile seating system, a reputation for reliability and a choice of frugal engines? The much improved version of the MK3 Verso MPV that Toyota launched in 2013 certainly ticks all those boxes. But does it make sense as a used buy?

This is the third generation version of Toyota's compact family-sized MPV, a vehicle we first saw in 2001 badged as the 'Corolla Verso'. That model only had five seats, but a MK2 seven-seater design followed in 2004, before this MK3 version made its debut in 2009, also with up to seven seats, but by now branded purely as 'Verso'. It was an exceptionally competent car, but it wasn't one you'd necessarily find reasons to try and buy and too often for Toyota's liking, potential buyers passed up the opportunity for ownership in favour of more stylish or perhaps more dynamic options in the compact people carrying segment. Hence the need for this revised third generation version, introduced at the end of 2012 and targeted at leaving more of a lasting impression. On the balance sheet, with lower running costs. On the road with extra refinement, revised suspension and sharper steering. And on your driveway with sharper looks and extra equipment. A car, in essence, to cover all your family transport needs, chapter and verso, in a way you'll feel good about. This car sold until 2018.

Toyota was keen to stress that the changes made to this third generation Verso in 2013 went a bit deeper than was usual with a mid-term facelift wash 'n brush-up. In all, over 470 parts were changed at this time, 60% of them visible, and the car was also 20mm longer than before. What you'll notice most though, if you owned the original post-2009 version of this model, is the brand's updated family face, the so-called 'keen' look we first saw on the company's second generation Auris family hatch. It certainly gives this Verso a more purposeful stance, dominated at the front end by a large trapezoidal lower grille set within a redesigned bumper and a smaller upper grille which features a chrome-plated horizontal trim bar and runs the full width between sleeker headlamp units that incorporate daytime running lights. Moving to the side, where there are smaller, more aerodynamically efficient door mirrors, the trademark dual-zone styling remains as before, with a strong character line flowing from the leading edge of the front bumper, rising through the lower edge of the doors, then sweeping up through the rear pillar to define the line of the rear, roof-mounted spoiler. It all nicely sets off rearward styling that, as at the front, also features extra chrome decoration, a revised bumper design and smarter light clusters. What didn't change in 2013 were the essential dimensions of this car - wheelbase, height and width - all of which means that there's no more space inside. So, as with virtually all compact seat MPVs, the third row seating you get in almost all models is really intended for children. If you really must put adults here, you'll find it fortunate that the seats recline. To keep bigger folk happy even on short journeys though, you're probably going to need to go a bit further than that and persuade those in the middle seating row to make use of the 195mm backwards and forwards sliding range that's on offer to enable some kind of passenger legroom compromise to be reached. This rear bench is really shaped for two, though three kids could be squeezed in if need be. There's plenty of storage space up-front too, with a spacious centre console box, decently sized door pockets and a twin-compartment glovebox with a cooled upper section that's big enough to hold a 1.5-litre bottle, plus an 8.2-litre lower section. In other words, everything is just as sensible as it was before, with the so-called 'Smart Wave Dynamism' dashboard design placing the gear lever comfortably close to the steering wheel, just where you'd want it. What's different though, in this improved Verso, is that all this sense and sensibility is a good deal nicer to live with thanks to tasteful trim improvements. Notably the softer satin black paint finish and the warm satin chrome highlights you'll find everywhere from the air vents to the instrument panel. And boot space? Well with all the seats occupied (a rare scenario for likely buyers), there's 155-litres of luggage room though you do get 11-litres of under-floor storage, enough to hold three six-pack cases of 1.5-litre plastic bottles. Use the neat Toyota 'Easy Flat' seating system - said to provide 32 different seating permutations - and fold the rearmost row into the floor and your available cargo space increases to 440-litres. In seven-seat models, that rises to 982-litres with the middle row also folded down to create a totally flat surface that's 1,575mm long and 1,430mm wide.

The original Corolla Verso developed a cast-iron reputation for reliability, but the Mk2 model slipped off the pace a little bit as new quality procedures at the Turkish factory took a while to become the accepted culture. This third generation car proved to be a lot better and has few generic faults. The engines are all very tough and the load area is also hardwearing. Make sure the electronics work as they should and that the satellite navigation system can lock onto a position after a tunnel. Also check that the vehicle has been serviced on the button. In our survey, one owner had a problem with the engine management system. Others complained of creaky interiors. There were also complaints of engine noise, excessive tyre wear and the need to replace brake discs too frequently. Look out for all these things as well as the usual scratched interiors caused by unruly kids. And scratched alloy wheels caused by distracted mothers.

When it comes to vehicle dynamics, the expectations of family buyers have changed a bit since this Verso was first launched in 2009. Back then, it was still quite acceptable for a car of this kind to offer a largely undemanding set of driving manners but by 2013, other brands had shown just how much better than that a model in this segment could be. Toyota's engineers needed to try harder, while still satisfying the vast majority of owners simply wanting comfortable A to B motoring. Essentially, this car needed to feel a bit sharper. It does in this post-2013 form. The body's more rigid than before and the power steering was tweaked for extra precision and feel. There was a revised suspension layout too for extra comfort and stability. And the difference all this makes? Well if you owned the original version of this model, it shouldn't be long before you notice it. Certainly, when you're pushing on a bit through a series of bends where the car will feel more confident and agile. But also through the corners in more relaxed motoring where a reduction in body roll will keep your passengers happier. They'll like the fact that it's quieter too. That stiffer body, sleeker styling and extra soundproofing see to that, ensuring that vibrations are far less intrusive and that as a driver at motorway speeds, you no longer need to raise your voice to talk to passengers in the rearmost row. Not even at the wheel of the diesel version that most customers will choose. By 2013, there was no longer a pokey '180' D-4D version, so black pump buyers wanting a post-2013 model must be content with a 122bhp variant of the familiar 2.0-litre unit. Like all Verso models, it'll get you from rest to 62mph in around 11s on the way to 115mph. In 2014, Toyota also introduced a BMW-sourced 1.6 D-4D diesel for this car. If you want petrol power, there's a choice of a couple of Valvematic units, either a manual 130bhp 1.6 or an automatic 'Multidrive S' 145bhp 1.8.

The Verso has always been a car you bought because it made sense. This one though, does a bit more than that. Its compact seven-seat family layout still ruthlessly ticks almost every practical box. And it remains a solidly appealing take-it-as-you-find-it, get-the-job-done kind of vehicle that's thoroughly user-friendly, especially with its easy-to-operate seating system. As before, you'll find that almost nothing will go wrong and that everything will feel just right. All that we've known since the third generation version of this Toyota was launched in 2009. The difference with this facelifted MK3 model though was that this recipe came with the injection of a little extra luxury and a lot of extra personality. True, those aren't the attributes that will have first prompted you to buy a People Carrier but in a closely-fought market where every contender seems similarly specced, they're the things that can make the difference. And they created in this car a quieter, smarter, more efficient, more comfortable and just plain better Verso. Overall, there are few more practical, more reliable or better built choices from this era in this segment. So with this MPV, you can make a head choice with a bit of heart too. 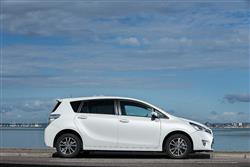 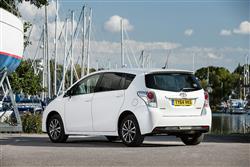 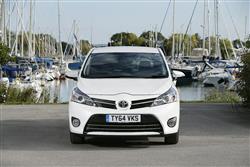 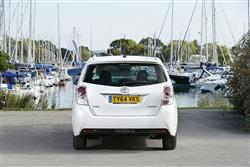 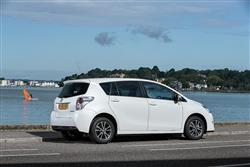 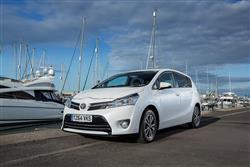