Toyota has been continually improving its third generation Yaris supermini, but the package of revisions we look at here is the most far-reaching yet, delivering an all-new look, a new 1.5-litre petrol engine and standardisation of the brand's camera-driven 'Safety Sense' package. What was already a class act has just become genuinely hard to overlook.

If you were asked to name the cars vying for the title of best supermini, it would be a reasonable wager that the Toyota Yaris wouldn't be amongst your top three. If, on the other hand, you had to name a small car that would be trouble-free, cheap to run and easy to use, it would be right up there. The thing is, those criteria are exactly what many supermini buyers are looking for. They don't care if the car can't take the Esses at Donington flat without lapsing into understeer. It's an irrelevance for most but car magazines still put a huge priority on handling and award their 'best of' titles predominantly on which cars are most fun to drive at the limit. The Yaris has always been a supermini that works well in the real world and this third generation car is no exception. It has long lacked a bit of flair though, and Toyota has belatedly realised this, endowing the latest model with a lot more styling input, as well as engineering improvements.

Toyota has worked to improve the driving dynamics of this car in recent times and the result is that if you haven't tried a Yaris for a bit, you might be surprised by just how well this one handles. Probably the greatest efforts have been centred on improving refinement and to that end, more recent models feature better soundproofing material, refettled engines and sleeker aerodynamics to reduce wind noise. The big news on the engine front is the introduction of a new 1.5-litre petrol engine to replace the previous aging 1.33-litre unit. Power output is up 10% to 110bhp, which makes the car nearly a second quicker over the 0-62mph sprint (which now takes 11.0s). More important is the news that torque is up to 136Nm, so the crucial 50 to 75mph overtaking increment is a second quicker too. The engine can also be paired with an optional CVT automatic. As before, other Yaris engine options include a 1.0-litre VVT-i petrol unit and a 1.5-litre petrol/electric Hybrid which has been re-engineered for greater efficiency. And on the road? Well, it depends upon your expectations. Though the ride is better than it used to be, it still gets unsettled over rougher surfaces. And though the steering is a touch more feelsome than long-time Yaris users might be used to, it's still very light and better suited to metropolis rather than motorway use. Which is one of the main reasons why this car remains one of those you'd buy primarily to shoot to the shops and take on the odd motorway trip to the mother-in-law, rather than to speed around Silverstone. That's why traditionally, there have been no hard core hot hatch Yaris variants, though that's now changed since the announcement of a 1.8-litre supercharged 205bhp Yaris GRMN model.

Toyota has spent over 90 million Euros improving this model, so we're talking about more than just a light facelift here. The front end is completely new, much sleeker and classier than before. There are revised rear tail light clusters too. It's these days a more assertive-looking design and Europeans like that. The headlights feature projector technology for high and low beams and the clusters incorporate LED daytime running lights. In profile, this improved Yaris displays a smart door belt moulding, door mirrors with an optional folding function and classy 15 and 16-inch alloy wheel designs. A rear bumper and diffuser assembly give the back end a more self-confident look. The interior features the Toyota Touch 2 multimedia system, complete with a 7-inch screen. This apart, the interior hasn't changed much since this car was launched in 2011. Which means that build quality from the French Pas-de-Calais factory is as strong as ever. And that the controls are sensibly positioned and extremely easy to get to grips with. There's also plenty of interior storage space, though some of the ledges provided tend to deposit their contents onto you once you corner with any speed. The door bins are useful though, able to accommodate a decent sized drinks bottle with ease. The boot offers 272-litres of space. Toyota's impressive EasyFlat rear seats split 60:40, fold and slide bringing a useful degree of versatility and up to 477-litres if you need it.

Prices sit in the £12,500 to £19,500 bracket, which is pretty par for the course in the supermini segment. Prices for variants fitted with the new 1.5-litre petrol engine begin at just over £15,000 and Hybrid models start at around £16,000. Toyota knows equipment levels for this car have to be very class-competitive, so even the most basic 'Active' version now gets the brand's 'Safety Sense' package which includes a 'Pre-Collision' autonomous braking system, 'Lane Departure Alert' and 'Automatic High Beam', features you won't find anywhere else as standard at the 'Active' variant's price point. This base trim level also gives you rain-sensing windscreen wipers, power front windows, Bluetooth and a six-speaker audio system. Hybrid models additionally feature automatic air conditioning and projector headlamps. If you can afford to go further up the range, there are 'Icon', 'Icon Tech', 'Design', 'Bi-Tone' and 'Excel' vaiants to choose from. Particularly popular is the 'Icon' grade that gives you 15-inch alloy wheels, cruise control, air conditioning and a 4.2-inch colour TFT multi-information screen. At this level, you get the Toyota Touch 2 touchscreen-controlled multimedia system, a rear-view camera and the Toyota Safety Sense features are expanded to include Road Sign Assist.

The Yaris' residual values have always held up better than a Fiesta and leagues better than a Corsa and will stack up even more competitively now that the efficiency of this latest model has been improved - at least in mid-range petrol form anyway. The 1.5-litre unit is 12% more efficient than its 1.33-litre predecessor, official figures suggesting a combined cycle performance of 56.5mpg and 109g/km - with manual transmission on 16-inch wheels. Of course is you really prioritise efficiency, you're going to want to look at the Hybrid model, which accounts for a quarter of all UK Yaris registrations. This manages at CO2 return of 75g/km, which translates to a combined fuel economy figure of 85.6mpg with virtually zero NOx and particulate emissions. The three-cylinder 1.0-litre petrol engine that most customers choose now meets the stringent Euro 6 emissions standards and manages a carbon emissions figure of 99g/km.

The original version of this MK3 model Toyota Yaris was one of those cars that grew on you but it didn't have the force of personality to impress you with sheer showroom wow factor. The latest model ups its game usefully in that regard. Is that enough to propel it into the top bracket of superminis? In truth, it was already there, but went largely unrecognised by the popular press. These latest changes probably won't impress those who pore over 0-62mph times or wax lyrical about handling adjustability. But what the Yaris lacks at the ragged edge on a Welsh mountain road, it more than makes up for in everyday use. Put down the car magazines, ask yourself what you really need a supermini for and then see if the Yaris doesn't tick every single box. 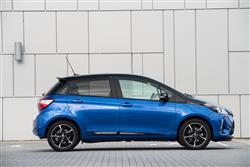 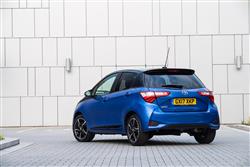 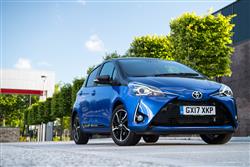 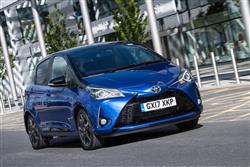 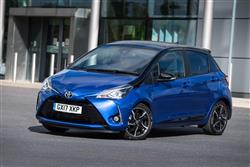 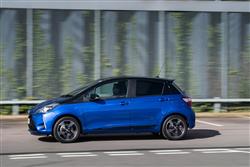