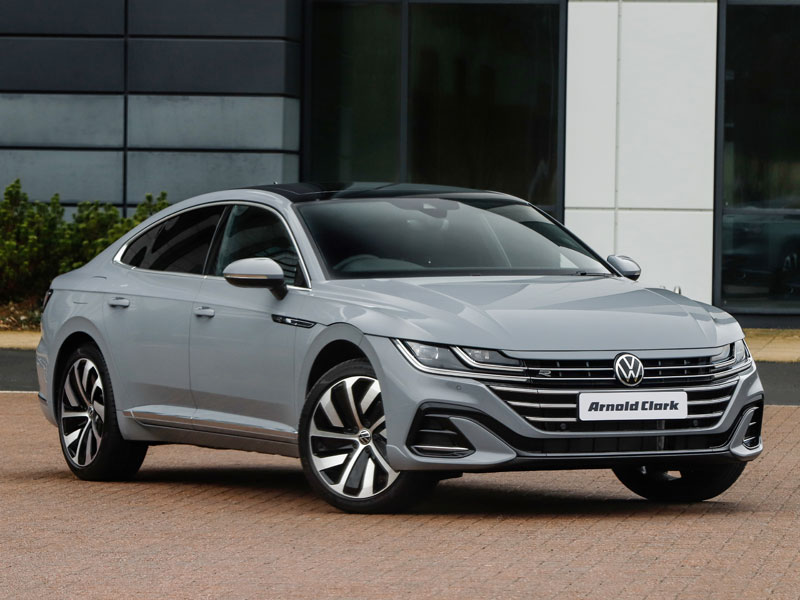 Available at Volkswagen branches
From £35,995 Save £2825 on current list price
£3500 Deposit
£459 Per month
Available to pre-order
Enquire now
WhatsApp

Volkswagen's sleek Arteon was launched as a Gran Turismo-style five-door hatch model in 2017 to head up the brand's range but it's remained a rare sight on our roads. Now it's been revised, there's the option of a 'Shooting Brake'-style estate and plug-in hybrid tech is available too, plus there's a top performance Arteon R variant.

Uniqueness is a quality you usually have to pay royally for, especially when it comes to cars affordable enough for you and I to consider. Once upon a time, drivers seeking it in the Mondeo medium range market would pay a premium for a prestigious badge and feel themselves special with an Audi, a BMW or a Mercedes on the driveway. But in an age where so many now do just that, you begin to wonder these days just how special that would be. So what if uniqueness - specialness - in a car of this kind were to be not in the badge on your keyfob but in the design of the car itself? Something very different from anything else you could buy for the money. Something like this, the Volkswagen Arteon, now much improved. Quite a few of the underpinnings used in this model are borrowed from humbler members of the Volkswagen line-up - but then that's also the case with obvious rivals. It's the dressing that counts, which in this case is very smart indeed and built around a whole raft of efficient high technology. Let's check it out.

The engine range kicks off with a 150PS 1.5 TSI petrol unit with 6-speed manual transmission, but most will want the 2.0 TDI diesel, which in base form comes with 7-speed DSG auto gearboxes and a 150PS output. There's also a high power biturbo 2.0 TDI 200PS diesel option. Alternatively, there's a 190PS 2.0 TSI petrol unit, also with a DSG auto 'box. There are no mild hybrid powertrains because they won't work with this car's MQB platform. Beyond the mainstream powerplants, there are also a couple of engines new to Arteon buyers. The Arteon eHybrid uses the plug-in hybrid powertrain from the Passat GTE, a 160PS 1.4 litre four-cylinder turbo petrol powerplant mated to a 115PS electric motor giving a combined output of 215PS via a DSG auto gearbox. This plug-in model offers an electric driving range of 33 miles and can run in all electric form at up to 87mph. At the top of the range is the Arteon R, which uses a 2.0-litre TSI turbo petrol engine with 320PS, a 7-speed DSG auto gearbox and an updated 4MOTION four-wheel-drive system. Refinement is excellent, as is ride quality thanks to a specially developed four-link independent rear suspension set-up that can be embellished with a sophisticated 'DCC' 'Dynamic Chassis Control' adaptive damping system. You won't really want to go throwing this Volkswagen about: it isn't really that kind of car. But what it lacks when it comes to driving on its door handles it more than makes up for with exemplary trans-continental-style cruising ability.

The Arteon now comes in either Fastback or Shooting Brake estate forms. The look of the Fastback has been enhanced with a restyled grille, revised LED headlights and new alloy wheel designs. The Shooting Brake version gets a completely separate design from the B-pillar back, with a lengthier roof line, a sleeker glasshouse and pronounced haunches over the rear wheels, plus an angled tailgate. As before, Arteon buyers get frameless doors and a plunging rear roofline, the aesthetics based on the 'Sport Coupe Concept' prototype that Volkswagen showed in Geneva back in 2015. The long bonnet is certainly eye-catching, dipping into the wheelarches and meeting the smartly stylish LED headlights with seamlessly integrate into the wide, horizontal grille, creating a look that Volkswagen says will be seen in many of its next generation models. The five-door coupe roofline of the Fastback is paired with a prominent character line running from the headlights to the tail-lights, creating distinctive shoulder haunches towards the rear. At the wheel, it all looks much classier than a Passat. There's a re-designed dashboard with a smarter upper section, a standard 10.25 inch digital instrument display, a revised steering wheel and Volkswagen's most up-to-date infotainment system, offered either with 8-inch or 9.2-inch touchscreens. In the rear, there's much more passenger space than the current Passat can provide. At first glance, there's not much difference between the body styles when it comes to boot space - 563-litres in the Fastback and 565-litres in the Shooting Brake. Push the rear bench forward and it's 1,557-litres in the Fastback and 1,632-litres in the Shooting Brake. But Volkswagen points out that space above the beltline isn't included in these figures, so the Shooting Brake's load area is actually quite a lot larger.

Prices start at around £32,000 and, for the 2.0 TDI diesel variants most will want, range from around £34,000 up to around £43,000. There's a premium of around £1,100 for the Shooting Brake estate body style that Volkswagen expects will account for the majority of sales. Across the range, there are three trim levels - 'SE Nav' (for the hatch model only), then 'Elegance' and 'R-Line' for both body styles. 'Elegance'-trim models are marked out by their 18-inch 'Almere' alloy wheels and gain keyless entry across both body styles, a rear-view camera and Travel Assist - Volkswagen's adaptive cruise control and lane keeping system. On the inside, the Arteon 'Elegance' benefits from luxuries such as a leather-wrapped capacitive steering wheel with touch controls, heated seats, and voice control, while drivers can also choose between driving profiles for a customisable driving experience. The Arteon 'R-Line' offers distinctive, 19-inch 'Montevideo' alloys, while dual trapezoidal exhaust tips on each side of the bumper are moulded into a standard R-Line body kit, for an assertive, sporting appearance. A sunroof is standard on all 'R-Line' cars, while the Shooting Brake gains a standard-fit panoramic sunroof. Both cars also receive rear tinted glass and interior ambient lighting with 30 colour options. Across the entire range, all Arteon models feature Adaptive Cruise Control (ACC), 3Zone climate control, Digital Cockpit, LED headlights, Wireless App Connect and Volkswagen's 'We Connect Plus' package, which adds live data services to the standard 8-inch Discover Navigation system.

As you'd expect, the Arteon is extremely class-competitive in terms of WLTP running costs. The 2.0 TDI 150PS variant that most will choose manages up to 57.6mpg on the WLTP combined cycle and 128g/km of WLTP-rated CO2 in DSG auto form - not bad for a 148mph luxury conveyance. For the 190PS 2.0 TSI petrol variant, the figures are 38.2mpg and 168g/km. As for servicing, well as usual with Volkswagen models, there's a choice of either 'Fixed' or 'Flexible' maintenance packages. You'll choose the 'Fixed' approach if you cover less than 10,000 miles a year and with this, the car will typically be looked at every twelve months. If your daily commute is more than 25 miles and your Arteon will regularly be driven on longer distance journeys, you'll be able to work with a 'Flexible' regime that can see you travelling up to 18,000 miles between garage visits - or every two years, whichever is sooner. And warranties? Well the standard package is three years and 60,000 miles. Plus your car will come with three years of pan-European Roadside Assistance that has no mileage restriction. The paintwork warranty lasts for three years and, as you'd expect, this model is protected by a 12-year anti-corrosion package.

So, can this improved Arteon really justify its premium pricing? If you can afford it, then I'm guessing you'll think so. The idea of a practically-sized four-door coupe or stylised estate might still sound like a contradiction in terms but it's been interpreted here in a form that's created one of the classiest models that Volkswagen makes. Style, it seems, is not about the badge on your bootlid. But if you're a potential Arteon buyer, then you probably already knew that anyway...... 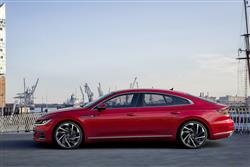 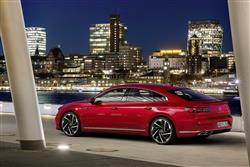 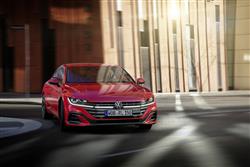 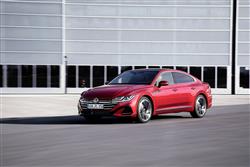 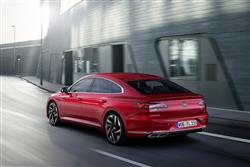 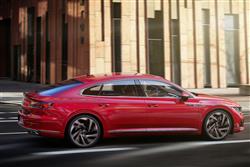