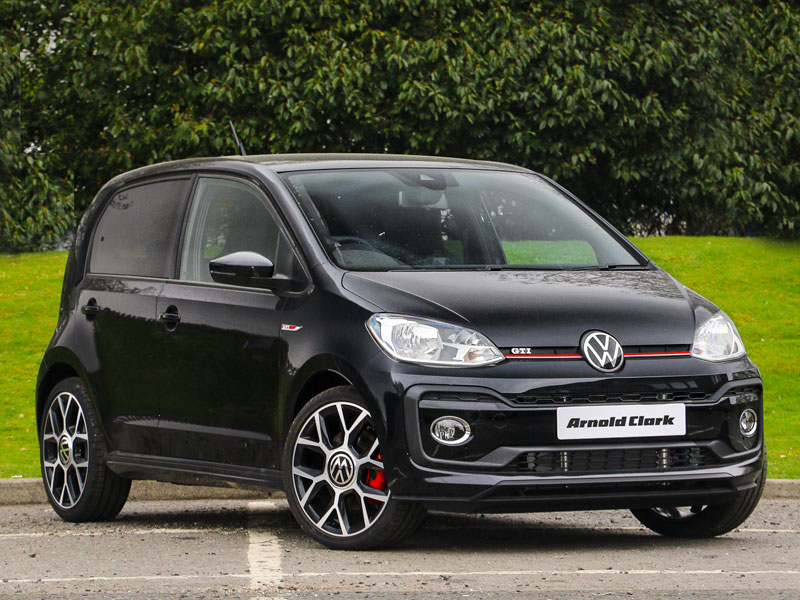 Available at Volkswagen branches
From £18,055
£279 Deposit
£279 Per month
Finance your car with PCP
Available to pre-order
Enquire now
WhatsApp

With the up! GTI, now lightly improved, Volkswagen rekindles the spirit of shopping rockets past. Jonathan Crouch checks it out.

Volkswagen's up! GTI takes pretty much all of the hot hatch purity that marks out the Wolfsburg brand's larger Polo and Golf GTI models and distills it into something smaller and more affordable. There's a perky 115PS three cylinder 1.0-litre TSI turbo engine, agile handling, light weight and plenty of scope for personalisation. Sounds promising.

I don't remember the original MK1 Golf GTI of the mid-Seventies and I'm almost certain that you won't either. However, Volkswagen tells us that most of what made that iconic shopping rocket truly great is brought back to us by its smallest hot hatch model, the up! GTI. In many ways, it's surprising that there aren't more options for buyers wanting something citycar-sized with a bit of extra zip. If that's your bag, then there's the Abarth 500, the smart BRABUS forfour and... Well not a lot else. Not a lot then for this contender, the Volkswagen up! GTI to beat. But on paper at least, it looks a pretty complete proposition anyway. Volkswagen claims to have lightly revised it but not too much has changed. Not too much needed to.

Some junior shopping rockets require you to thrash the engine within an inch of its life if you're to release respectable performance. The up! GTI isn't like that. The 1.0-litre TSI turbo three cylinder powerplant beneath the bonnet is a reworked 115PS version of the 90PS unit we've tried in the ordinary up! and like that unit, develops most of its punch in the mid-range. So you won't be thrashing about, ramming the rev limiter in the way you would in some rivals. But that doesn't mean this dinkier GTI can't charm you in a different way. Power on and it delivers a fizzy, effervescent feel thanks to sharp throttle response, super-light weight and an engine note boosted with surprisingly realistic drama by the stereo speakers. By modern hot hatch standards, you're not actually going very fast - rest to 62mph takes 8.8s and the top speed, at 122mph, is not much more than your local sales rep's Ford Focus. But you quickly forget about that and adjust to a different brand of performance motoring. You learn to rely on momentum to urge you on from turn to turn, rather than wasteful bursts of planet-sapping power that you'd normally almost instantly scrub off again at the next bend. At Car & Driving, we've got used to needing to hire a track to really explore the limits of the average modern hot hatch. In this case, all you need is a lightly-trafficed stretch of your favourite route back from the school run. On such a road, you'll notice cornering roll's impressively controlled, thanks to revised dampers, stiffer springs, a lowered ride height and a beefed-up rear axle. Yet despite all this - and a bespoke set of 17-inch wheels - the ride remains compliant. We'd like a little more feel from the steering, but it's pleasantly direct. Our only significant issues lies with the gearbox, lifted pretty much straight from an ordinary up!. The shift ought to have been tuned into the spirit of this car, as it has been in some rivals.

Not much has changed visually, apart from the adoption of the new Volkswagen brand badge. Styled inside and out to be an unmistakable member of the modern day GTI fraternity, the up! GTI of course boasts the famous GTI branding front and rear, along with other details synonymous with the GTI such as the sporty honeycomb front grille, darkened side windows at the rear and bright red brake callipers. There are also red trim strips front and rear, bold 17-inch alloy wheels, a chrome tipped exhaust and sporty twin side stripes that are supposed to recall the styling of the original '70s Golf hot hatch. Inside, this sporty up! Is distinguished by both traditional and modern GTI trademarks. The recognisable 'Jakara Red' checked cloth trim on the front sports seats for example; and the GTI gear knob and flat-bottomed three-spoke multifunction steering wheel which is leather-bound and features contrasting red stitching. Plus there's red ambient lighting and a 'Red 2D Pixel' dashpad, all allowing this up! To make its style statement. As with the ordinary up!, there's a 251-litre boot. Push forward the rear bench and the 959-litre total is 50% more than you'd get in the ordinary boot of a huge Volkswagen Passat Estate.

If you're wondering about the price, well we'll tell you it lies within the realms of affordability - just under £16,000. That only gets you the three-door model; there's also a five-door version available for £500 more. Standard kit includes 17-inch 'Oswald' alloy wheels, GTI badging and the hallmark 'Jacara' checked cloth upholstery, as well as ambient lighting. Other creature comforts include Volkswagen's Composition Colour radio system with a five-inch colour screen, a 4x20W output via six loudspeakers, a Bluetooth telephone and audio connection and a USB interface. There's also air conditioning, heated seats, electrically adjustable and heated wing mirrors and front fog lights with static cornering lights, all of it standard fit. Paint colours are also reminiscent of the Golf that started it all: "pure white", "red", "dark silver metallic" and "black pearl" are the options available, plus if you order your car in white, red or silver, there's the option of a contrasting black roof.

WLTP Combined cycle fuel economy is rated at 53.3mpg - but if you get close to that on a regular basis, then you probably shouldn't have bothered buying this car in the first place. The official WLTP CO2 reading is 120g/km. The up! GTI was one of the first Volkswagen cars to launch with a close-coupled petrol particulate filter. Its use reduces particulate emissions by up to 95%. After flowing through the turbocharger, the exhaust gas gets fed directly into the particulate filter, which, with its special coating, also works in parallel as a regular catalytic converter. And warranties? Well the standard package is three years and 60,000 miles. We can't see why Volkswagen couldn't extend that mileage limit to 100,000 miles, since that what you get on its mechanically very similar Caddy model. Doing that though, wouldn't give Volkswagen dealers so much of an opportunity to sell extended warranty packages. There's one for four years and 75,000 miles or, if you plan to see a bit more of the world in your up! GTI, there's a five year / 90,000 mile package.

We can't imagine that Volkswagen will have very much trouble shifting as many up! GTI models as it can make to bring to these shores. British buyers love a small hot hatch with agile handling, a perky feel and a bit of heritage. This car ticks all those boxes emphatically. Ultimately, of course, it's not that fast. But on the right road on the right day, you won't care too much about that. A hot hatch should be about the smile it can paint across your face. This Volkswagen has been engineered to deliver that - just as its Golf predecessor was. Nothing changes. 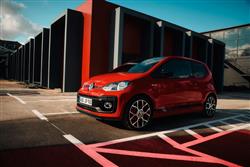