Van-based MPVs aren't the most glamorous vehicles around but Fiat's Doblo gets the job done. Jonathan Crouch looks at the improved fourth generation version.

Buying a van-based small MPV like Fiat's Doblo has always been more about sense than style but the improved version of this Italian five or seven-seat family-sized but still compact people carrier might surprise you with its sophistication.

Cars aren't always aspirational. Sometimes, they're simply about getting the job done practically, affordably and efficiently. Van-based MPVs are a good example of this rather refreshingly uncomplicated approach to automotive design - like this one, Fiat's Doblo. This is a substantially revised version of the fourth generation version which the Italian brand claims is smarter, more refined and better value. It'll sell though, for the same reason its predecessor did: practicality. This issue is high on the agenda for the design of every mainstream family car but conventional hatches must temper this approach to the dictates of style. If you've a growing family requiring space in a relatively compact, affordable five-door vehicle, what you actually need is a box with four wheels, yet one you wouldn't be embarrassed to be seen in at the supermarket. The Doblo has always tried to cater to buyers in search of such thing. But can it stay sensible yet get more sophisticated? Let's find out.

On the road, the Doblo handles better than you might expect it to, courtesy of its segment-exclusive, bi-link independent rear suspension, with dual-rate shock absorbers, high-performance springs and a rear anti-roll bar all tuned to provide a decent combination of ride and roll on most roads. Fiat's Multijet diesel engine is a perfect fit in a vehicle of the Doblo's ilk and it forms the mainstay of the range. This 1.6-litre unit offers 105bhp and is the alternative to the entry-level 95bhp 1.4-litre petrol variant. Both units have been refettled with the aim of improving refinement. No Doblo is what you would call quick but performance promises to be energetic enough for the kind of use to which the car will be put and the diesel engines should have the muscle to cope with the big payloads that the car is likely to be tasked with. The petrol unit takes 15.4s to reach 62mph from a standing start and with the 1.6 diesel managing a 13.4s time. More relevant is the torque that's available and 290Nm from 1,500rpm underlines the strength of the diesel unit. Also having a major impact on how the Doblo drives will be its surprisingly advanced suspension system. Recent detail dynamic changes include lighter and more precise gear changes, a more responsive throttle pedal, smarter instrumentation and better noise insulation.

The commercial vehicle origins of the Doblo are clear to see but the boxy dimensions that are essential in a decent van pay dividends by giving the car version a similarly vast carrying capacity. It's never going to be the most stylish thing on the road but blacked-out pillars create the 'floating roof' effect we've seen on many modern passenger cars while the large headlights and a deep grille add impact to the Doblo's front end. At 4,390mm long and 1,789mm wide, the Doblo remains one of the largest models in the van-based MPV class and has a larger footprint than most family hatchbacks. As for the latest changes, well the main ones are the resculpted front wings, the sleeker bonnet and the bolder front grille. Plus there are revisions to the lights and bumpers, as well as a more stylish body-coloured moulding across the tailgate. Inside, the car retains its versatility and practicality. Five-seat models have a vast 790-litre boot (up to the parcel shelf) which can be boosted to a class-leading 3,200-litres when all the passenger seats are folded down. Even the parcel shelf does its bit: it can be positioned at different levels and can carry loads of up to 70kg.

The Doblo is based on a van and that should tell you much of what you need to know about its place in the market. As well as making 'Doblo' look like a perfectly sensible name, rival models like Peugeot's Partner Tepee, Citroen's Berlingo Multispace and Ford's Grand Tourneo Connect offer similar no-frills practicality at prices that attract families on tight budgets. This Fiat looks good on prie against these competitors though, with the range starting at under £15,000. As before, there's a choice of five or seven-seat models and the option of a higher roof height if you want it. As for equipment, well even the base 'Pop' trim gets Start&Stop, remote central locking, electric front windows and a 60/40 split rear seat as standard. In terms of safety, every Dobl?? is equipped with ESC (Electronic Stability Control), ASR (Anti Slip Regulation), HBA (Hydraulic Brake Assist), a Hill Holder clutch, ABS with EBD (Electronic Brake-force Distribution), front airbags and a TPMS 'Tyre Pressure Monitoring System'. Furthr up the range on 'Easy' variants, you'll find eatures like body-coloured bumpers front and rear, front fog lights, body-coloured electric door mirrors, steering wheel audio remote controls and a height adjustable driver's seat. The top 'Lounge' trim comes equipped with air conditioning, 16-inch alloy wheels, rear parking sensors, an audio system upgrade including Bluetooth and USB/Aux-in connectivity, rear electric windows, power folding door mirrors, a leather-trimmed steering wheel and gear knob, dark tinted windows and cruise control.

Every Doblo comes with Fiat's Start&Stop technology and an optimum gear change indicator to help owners get the maximum fuel economy. The official figures don't make stunning reading initially but you have to remember how much the Doblo can carry. On the combined cycle, the 1.4-litre engine returns 39.2mpg, with the 1.6-litre Multijet offering 51.4mpg. CO2 emissions are 165g/km for the petrol version and 145g/km for the diesel.

More than a million Doblos have been sold since the turn of the century and after a few days with this sensible five or seven-seater, you can begin to understand why. But where the original version of this car was cheap, practical and not a lot else, this one's curvy boxiness hides a remarkable amount of sophistication. That's a word I never thought I'd use in connection with this car and it's something that makes you question the need to spend thousands more on a compact people carrier that, though more fun to drive, will probably be smaller - and costlier to run. A lot of it will come down to issues of image of course. If that's not an issue, then this car deserves a chance. Fiat claim to understand families. After checking out this one, I'm inclined to believe them. 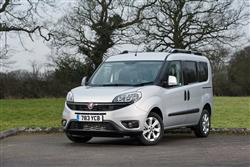 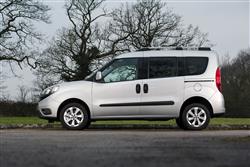 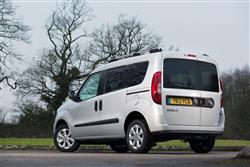 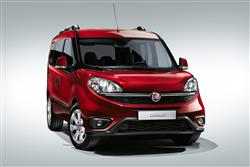 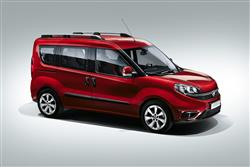 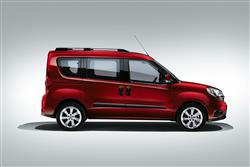