There aren't many pick-ups developed first and foremost to prioritise driving dynamics, but this is one of them. So what's it like? Well, really, it depends upon your expectations. Does it ride and handle like a Discovery? Well of course it doesn't. A Discovery isn't built to take a 1.3-tonne payload. But does it set handling standards for the pick-up segment? Very definitely yes, more agile, stable, precise and comfortable than any vehicle of its kind we've seen to date. There's decent steering feel for a pick-up too. Double Cab high-power variants now feature Active Noise Control technology for improved refinement. Under the bonnet, the key news lies with the introduction of a new 2.0-litre EcoBlue diesel engine to replace the previous 2.2-litre TDCi unit. It comes in a couple of single-turbo guises, with either 130 or 170PS. Plus there's a flagship bi-turbo 213PS unit with 500Nm of torque. That also features on the top Raptor version with its unique rally-stype coil suspension. Of course, if you're a typical Ranger owner, you'll want to be putting his pick-up's all-terrain capability to the test on a pretty regular basis. Which is why the range is now entirely built around 4WD variants. As usual with vehicles of this type, this one runs in 2WD unless you rotate this controller to its '4H' '4x4 High' setting, something that can be done on the move. That'll be fine for slippery tarmac and grassy fields, but for anything more serious than that, you'll want to switch further into the '4L' '4x4 Low range' mode that'll give you a seriously go-anywhere set of off road ratios.

There are three Ranger bodystyles - 'Regular' single cab, 'Super' (which has occasional rear seats) and 'Double Cab' with proper rear seats. The 'Regular' bodystyle is only available with base 'XL' trim, while the 'Super' option only comes with the mid-range 'XLT' and 'Limited' trim levels. Near the top of the line-up is the high-spec 'Wildtrak' variant, offered only in Double Cab form, with sales focused on the bi-turbo diesel engine. That's also the engine you have to have in the exclusive 'Raptor' flagship model. 4WD is fitted to all derivatives. Prices start at around the £22,000 mark, excluding the VAT that most business buyers will be able to claim back. For the Double Cab bodystyle most customers will want, you'll need to be budgeting in the £24,000 to £32,000 bracket excl. VAT. For a top 'Raptor' variant, you'll be looking at paying around £48,000 since you won't be able to claim back VAT on this model (because its payload capacity is too low for it to qualify as a commercial vehicle). Still, you get a pretty unique pick-up in return. With this improved Ranger, you get upgraded Ford 'SYNC 3' media connectivity, plus safety items like a Lane Keeping Aid and Adaptve Cruise Control. The FordPass Connect on-board modem turns the Ranger into a mobile Wi-Fi hotspot with connectivity for up to 10 Wi-Fi enabled devices, and also enables a range of features to be accessed via the FordPass mobile app. 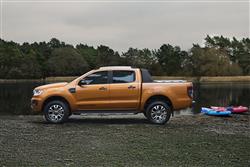 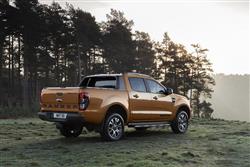 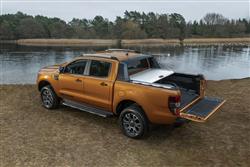 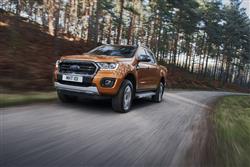 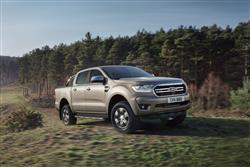 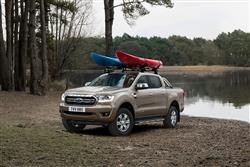