Renault's modern remit is to create more affordable, more sensible vehicles and nothing the company makes sums this up better than its all-electric Kangoo Z.E. 33 van. It costs a little more to buy than its diesel-powered stablemate, but from then on, the running cost savings will be huge. This battery-powered van was improved in 2017 with a bigger Z.E. 33 battery that has increased operating range by up to 50%, so theoretically, this LCV can go up to 143 WLTP-rated miles between charges. For forward-thinking operators, that makes this van a very difficult option to ignore in its segment.

The motor vehicle is at a turning point. It simply has to evolve, whether you believe in global warming or not. To emit less in cities. To make less noise. And to use increasingly scarce energy more efficiently. More and more electric cars are answering this call, but their environmental impact is likely to be limited until another class of vehicle properly takes up the challenge. I'm talking of course of vans. When it comes to toxic emissions in our inner cities, LCVs are arguably the biggest culprits, yet van makers have been slow to get on board the electric bandwagon. Renault, in contrast, has led the way - and done it with the model we're going to look at here, the innovative Kangoo Z.E.. Originally launched late in 2011, the Kangoo Z.E. was the market's first affordable all-electric van, the 'Z.E' in its name highlighting its ability to produce 'Zero tailpipe Emissions' in everyday use. And though the technology is new, the vehicle it's plumbed into remains the same second generation Kangoo design that's been on sale here since 2007, with levels of space and practicality untroubled by its new electric remit. This is a design that competes in the compact van sector where in all-electric form, it must battle tough rivals like battery-powered versions of the Peugeot Partner and the Citroen Berlingo. To help with that, in 2017 Renault introduced a new Z.E. 33 battery into this improved model with a usefully increased driving range. Electric vans are here to stay, but could your business really justify running one? Let's find out.

So what's it going to be like to drive? Pretty quiet is the answer. Press the throttle pedal and you move off in near total silence, so much so that you may find yourself rather startling dozy pedestrians and in need of the optional audio warning system that would alert them to your presence. That might be a useful thing to have for from rest, you'll find yourself coming upon them rather quickly thanks to the fact that 100% of this Kangoo's 226Nm of torque is generated from standstill. Once underway, it is true that, because of the heavy 260kg weight of all those batteries, the power surge does tail off rapidly after 30mph, resulting in a total 0-60mph time of nearly 22s. But if you've an urban-based business, how often are you going to be driving at or near 60mph? Exactly. At more likely delivery speeds, the 44KW electric motor (which puts out the equivalent of 60bhp) feels crisp and remarkably responsive, plus of course, as with all electric models, you've the equivalent of an automatic gearbox, so there are no gear changes to worry about. It's exactly the same mechanical set-up you'll find in Renault's ZOE Z.E electric car. And here, as with that model, there's just one issue that'll dominate your thinking in day-to-day use of this vehicle: that of operating range. Renault says that won't be an issue, quoting research suggesting that 70% of van drivers cover a daily distance of less than 62 miles. On that basis, this Kangoo Z.E's quoted WLTP range of 143 miles between re-charge fill-ups (or just over 100 miles in 'real world' conditions) should be quite sufficient.

The powertrain for this Kangoo Z.E. 33 model might be as different as you could possibly imagine from that of an ordinary combustion-engined version but you wouldn't know that from a casual glance at this van. Whether you've opted for it in 4.2m-long standard form or bigger 4.6m-long 'Maxi' guise (or as a 'Crew van' with five seats), it'll feature the smarter front end that arrived as part of the most recent 'Phase II' changes. As for the electric part of things, well, assuming you haven't noticed that there's no exhaust pipe, the only external giveaways are the badging and the charging flap you'll find at the front of the vehicle. Inside, apart from the conveniently centre console-mounted auto gearstick, the cabin is just like that you'll find in any of this model's diesel stablemates, comfortable, user-friendly and brightly lit thanks to its MPV-style forward-positioned panoramic windscreen. There's a high-up driving position offering a wide field of vision and a clear well thought out dashboard, reconfigured to include a battery charge indicator on one side of the speedometer and an 'econometer' (via which you can judge the efficiency of your driving) on the other. It's a practical cabin too, with an enormous amount of headroom, ensuring that all kinds of elaborate headgear could be accommodated should the occasion arise. There's no optional middle seat of the kind that some rival compact vans can offer: Renault thinks that isn't necessary thanks to the option of a Crew Van derivative featuring a fold-out three-person rear bench. But space for the two front seats you do get is more than adequate, with only the passenger legroom (slightly restricted by the sloping floor) giving any cause for concern.

List pricing is where most all-electric vehicles fall down. They're usually so expensive that they only make sense with the asking figure spread out over long leases. But refreshingly, things are different here. At first glance, asking prices ranging in the £19,000 to £22,000 bracket excluding the dreaded VAT look quite high. That's after you take the government's Plug-in Van grant into account. As in the standard Kangoo line-up, Z.E. 33 model buyers get a choice of two main bodystyles - the standard 'L2' 4.2m long variant and, for a premium of £1,000, the bigger 4.6m-long 'L3' model, which can be ordered in two or five-seat form or in fully-glazed 'Crew Van Cab' form with a fold-out three-person split-folding rear bench. On top of the purchase price, you'll also need to budget for a charging point, since Renault frowns upon operators using a three-pin plug supply on a regular basis, even if that were business-practical. The French brand works with British Gas for the installation of such a point, either at your home of place of business and the cost will be around £800 ex vat. The charging cable for this is of course supplied with the vehicle, but if you want a cable that will, occasionally, allow you to charge off a normal 220V home supply, then you'll need to buy a separate cable from your dealer.

The first thing you need to know here is that building in the electric propulsion system has had no impact at all on carriage capacity, all of the batteries and so on being housed out of the way under the floor. So yes, we're talking here of exactly the same dimensions and carrying capacity as the internal combustion-engined model In the standard 'L2' version, that means an overall vehicle length of 4.2m, which means that upon opening the asymmetric rear doors, you'll find a total load volume ranging from 3m3 to 3.5m3, also accessible via a sliding side door. The payload is 650kg and the flat floor permits a maximum load length of 2.5m (assuming you're using the fold-flat front passenger seat) and the width between the wheel arches is 1.21m, which enables a euro pallet to be loaded. Go for the larger 4.6m-long 'L3' variant with an extra 40cm in its wheelbase and you'll boost your carriage capacity up to 4.6m3 and increase your load length to 2.9m - though the payload allowance stays the same. If you're looking at this variant and also want the option to be able to carry people, then you can order it in 'Crew Van' form which features a fold-out, three-person, split-folding rear seat. As for running costs, well, you won't need me to tell you that this is a very efficient vehicle indeed. Depending on how you calculate it (and on the price you're paying for your electricity), plugging in this Kangoo will be between five to ten times cheaper than pouring diesel into it. The advantage of having your own 'Wall-Box' charging point is that you can choose to charge at off-peak rates. But even if you can't do that all the time, overall, you should be looking at an average outlay of no more than £3 to fully charge this Renault from empty. Further good news comes in exemption from London Congestion Charging and of course, electric vehicles have long been exempt from company car tax. Finally, maintenance costs via a special 'programmed maintenance' plan will be about 20% less than they would be for a diesel Kangoo.

So, what do we have here? An electric van that's simple, but highly technologically advanced at the same time and incredibly eco-friendly. This 100% electric Renault lets your business take a different route, lowering your overheads and showing your clients that you're fully committed to doing the really responsible thing. And, with the improved Z.E. 33 battery's considerably increased operating range, this model might be a credible option for businesses who once couldn't have considered it. The adoption of electric power across the automotive spectrum is only going to have a significant environmental effect if it's also adopted by the van segment and in blazing a trail here, Renault should be applauded. With government grant assistance, it costs little more than a diesel alternative that in comparison is thirsty, dirty and smelly. So if you need a vehicle of his kind - if you're in the market for a compact van and like most businesses today, you've one eye on the bottom line, why wouldn't you buy one of these? Answers on a postcard please..... 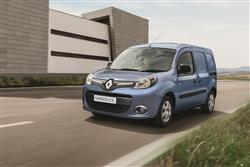 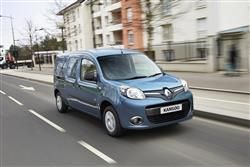