Vauxhall revitalises its Movano large van - with a little help from its French cousin brands. Jonathan Crouch takes a look.

Vauxhall completes the switch of its LCV range to Peugeot/Citroen-derived underpinnings with this third generation Movano, which remains the company's largest van. That platform change allows provision of an all-electric version, but most operators will be looking at the now more efficient diesel offering.

Size matters. To businesses needing a really big van. And to Vauxhall, which as one of the UK market's leading LCV players, needs a really class-competitive large van to top off its commercial vehicle range. In truth, it's some time since the brand has had that, but with the switch of its Movano model to Peugeot/Citroen underpinnings in its third generation form, the figures now seem to stack up much better. The second generation Movano this current design replaced was on sale for over a decade, but this MK3 version will have a much shorter life because it's based on Peugeot Boxer and Citroen Relay models already well advanced in their life spans. Both though, are based on underpinnings allowing for the provision of an all-electric version, so this Vauxhall can offer that too. The most important news for operators though is that the volume diesel variants produce more class-competitive efficiency.

Instead of the aging 2.3-litre CDTi diesel engine used by the previous model, this third generation Movano gets the more efficient PSA Group 2.2-litre unit. This better meets strict Euro 6d emissions regulations and is available with two power outputs, either 140PS or 165PS, and with torque figures of between 300Nm and 370Nm. Both versions of the engine feature a six-speed manual gearbox and front-wheel drive. Alternatively, there's the all-electric Movano-e. Vauxhall is only offering this variant with this design's larger 70kWh battery, which gives a 139 mile driving range between charges. This EV model's under-floor battery positioning results in a low centre of gravity, improving cornering and stability even when fully loaded. A sophisticated regenerative braking system that recovers energy when slowing is said to increase the Movano-e's efficiency.

Vauxhall wasn't given leave to redesign the front end of the existing Peugeot Boxer / Citroen Relay design, so the nose section is much the same, save for the addition of the familiar Vauxhall Griffin badge, with its chromed wings either side. The large high-mounted headlights incorporate daytime running lights. And there's a multi-piece front bumper to minimise accident damage and reduce repair costs. Climb inside and you'll be greeted by decent quality cab trim and a reasonably modern dashboard layout. As you'd expect, this Movano features a dual passenger seat, this one incorporating a drop-down desk unit. Up to ten in-cab storage areas are available, including the glovebox, a dash-mounted document clip and various open or lidded compartments on the dashboard. In addition, there are large door pockets, storage space beneath the passenger seat and a sizeable 22-litre overhead storage compartment. There's been a clear effort in design here not just to improve the perception of quality in the cab but also to beef up high use, high stress items such as the rear doors. These have been reinforced and high strength door hinges are used. Similarly, the sliding side load doors get reinforced rails, tough-design runners and security-tested door locks.

Prices, as you'd expect, are much the same as those being charged for the Citroen Relay and Peugeot Boxer models that now share this Vauxhall's engineering. That means that without VAT, you're looking at starting figures beginning at just under £31,000 and rising to just under £36,000. There are two trim level options - 'Edition' and 'Dynamic'. You'll need a lot more than that for the all-electric Movano-e of course; think around £61,000 for the 70kWh L3 version, or around £62,000 for the 70kWh L3 model, before you start subtracting the available government grant. For panel van customers, there are three roof height choices - 'H1', 'H2' and 'H3'; and three body lengths - 'L2', 'L3' and 'L4'. As well as the panel van body shape, the Movano is also available as a chassis cab, a chassis crew cab and a platform cab with a single row of three seats. And customers can opt for a wide range of conversions, including tippers and dropside loaders. On all versions of this Movano, LIVE Navigation provides online traffic information in real time. Customers get use of the MyVauxhall app, which allows access to information such as nearby charging stations. There's also the Vauxhall Connect system, which comes with Vauxhall's e-Call and b-Call technology, where in the event of an emergency or breakdown drivers are put in touch with a trained advisor with just the touch of a button. Safety features include forward collision alert, blind spot warning, lane departure warning and Hill Descent Control, which takes into account the extra length of a trailer when warning drivers about objects in their blind spot.

On to practicalities. With the base medium wheelbase L2 model and you can get both standard (H1) and high (H2) roof formats, giving respective load volumes of 10m3 and 11.5m3. The Movano L2 panel van has a load deck length of 3120mm and either an interior load height of 1662mm (H1) or 1932mm (H2). It can also be specified in 3.3, 3.5 and 4.005 tonne gross weight versions. Should you really need some big capacity, the long wheelbase L3 format will be the ticket. In this configuration, the Movano has a load deck length of 3705mm and an internal load height of 1932mm, which gives a 13 m3 capacity. The largest Movano panel vans are the 3.5 and 4.005 tonne L4H2 and L4H3 models, which have a load deck length of 4070mm and a 17.0m3 capacity. Payload capacity (regardless of powertrain) is up to 2,110kgs. If you're opting for the all-electric Movano-e, which attracts 0% BiK taxation, you'll be pleased to find that its EV powertrain doesn't compromise load volume. That's because the drive system's lithium-ion battery is mounted under the floor between the front and rear axle and so doesn't impinge on the cargo bay. The Movano-e comes only with the 'H2' roof height but with a choice of 'L3' or 'L4' body lengths. On to running cost efficiency. The 2.2 litre turbo-charged diesel engines offer better fuel economy than the Movano's old 2.3-litre CDTi unit. The 120hp variant manages up to around 35mpg on the WLTP cycle in regular use, with the 140hp unit much the same. Even the gutsier 165hp powerplant only falls as far as around 31mpg. What about the EV version? Well like Vauxhall's other fully electric LCV models, the Movano-e is exempt from current ultra-low and congestion charge payments. The zero emissions powertrain also allows businesses to save significantly on company van tax, with a 0% Benefit-in-Kind tax rate. This provides eligible businesses with immediate and significant annual savings that can amount to thousands of pounds.

If your business needs a large van and you're familiar with this segment of the market, you may have in recent years ignored the Vauxhall Movano as a potential alternative in a sector full of more modern, efficient designs. This third generation version though, once more deserves a place on your shortlist. No fresh standards have been set here, but this model line now matches most of the requirements many operators will have in terms of efficiency, practicality and body choice. And there's an all-electric option for those businesses needing it. In short, Vauxhall's biggest LCV has moved on. It'll be interesting to see if potential customers are ready to move on with it. 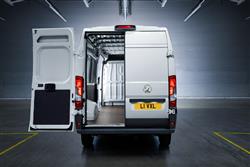 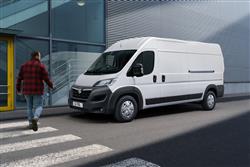 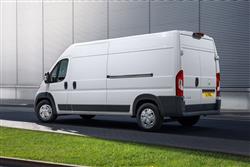 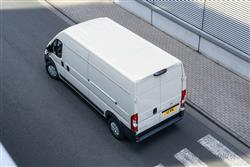 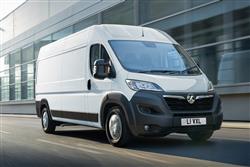 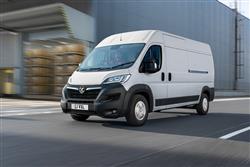