Ropits: The Self-Driving Car From Japan 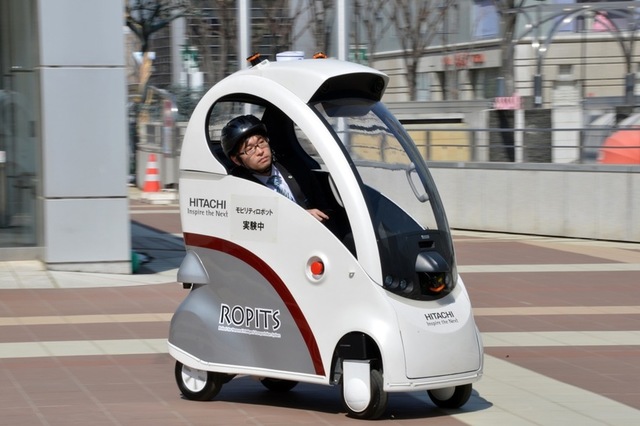 Designed with elderly and disabled drivers in mind, this car can be controlled using your smartphone or tablet. Image: Hitachi

This month, Hitachi has launched a new self-driving car in Japan. ROPITS – an acronym for Robot for Personal Intelligent Transport System – can transport you around town with minimal effort on your part. In fact, you can control it using just a smartphone or tablet.

Designed with elderly and disabled drivers in mind, the vehicle moves on footpaths and pavements as opposed to roads. A touch-screen map with GPS is used to set the general course of the vehicle. With the 3D laser distance sensors and stereo cameras on the front of the car, which allow the near-sentient vehicle to detect anything in its path, it manages to avoid collisions with unsuspecting pedestrians.

Ropits can even handle curbs and steps thanks to actuators in the wheels, which adjust their height as the depth changes. Meanwhile, gyro sensors allow the vehicle to maintain its position and balance on uneven ground.

Passengers are able override the automated system in the case of an emergency, and use a joystick to control the direction of Ropits, whose top speed is 4 miles an hour.

Currently being developed and marketed for those who need assistance traversing short distance, the next step for Ropits, according to Hitachi, is automatic goods deliveries. Of course, research has already been done to create vehicles that ‘drive’ themselves, and thus solve the problems of road accidents and traffic management. Unmanned solar-powered vehicles are currently in use in Masdar, Abu Dhabi; Google have a fleet of autonomous cars in California, and engineers from Stanford University have even developed a car with eyes.

Although there is nothing quite like this on the market in the UK, you can browse our nifty electric vehicles below.